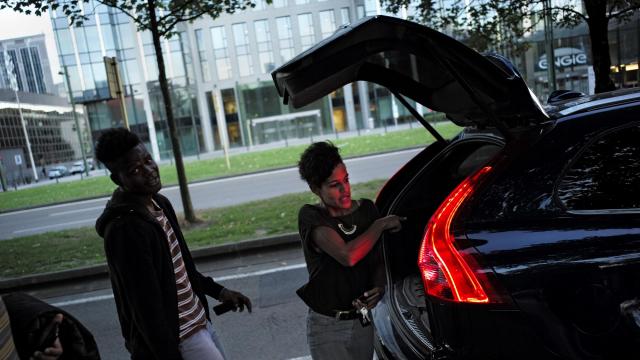 MONT-SAINT-GUIBERT, Belgium — The migrants while away their days in Brussels at Maximilian Park, near the busy Gare du Nord, playing soccer on the durable artificial grass, checking their smartphones, dodging police and trying to find a way to Britain.

Roxane Hauzeur, a designer for a fashion house, began volunteering to help them a year ago, working with a new organization that provides housing and other assistance for the migrants, most of them from Africa and seeking asylum.

She found herself swept away, transported.

Hauzeur started bringing food, then giving rides, but soon she was playing host to up to five people a night in her small Brussels apartment. The experience has transformed her, she said.

“It was like a tsunami in my life,” she said. “You come and meet these people and you realize they’re just like you.”

The latest refugee crisis, which peaked in 2015, brought hundreds of thousands of migrants to Europe. And though the numbers have dropped considerably, many in Belgium, as elsewhere in Europe, see the migrants, often young and male, as a threat.

Hauzeur and her fellow volunteers at Citizen’s Platform for the Support of Refugees have a different view.

“I feel ashamed of my country,” she said. “I heard so many times that Europe is the land of human rights, but it’s not true.”

Citizen’s Platform was the idea of Mehdi Kassou, a 35-year-old Belgian of Moroccan ancestry who left his job with a Korean company to found the group. Roughly 7,000 Belgians volunteer there to help migrants and asylum-seekers.

When Kassou walks through the park, he is greeted like a rock star. He gets warm hellos, fist bumps and conversation in French and the various Arabic dialects he is trying to learn.

The migrants who come to Belgium see it as their best way to slip into Britain. But they face a variety of legal complications.

And they have more basic needs.

“We now house about 650 people a night,” Kassou said, 300 in a building the group got permission to use last December, serviced by some 15 employees. The rest are housed by volunteers.

Kassou urges those most likely to qualify for political asylum to apply in Belgium; those who are rejected often appeal.

The government estimates that only a few thousand migrants in the country illegally are here now, and that just a few hundred roam Maximilian Park.

Officially, the number of asylum-seekers in Belgium in 2017 was 19,688, down from 44,760 in 2015. Asylum is granted to fewer than half of those who apply, Kassou said, but more easily to those from Syria, Eritrea and other areas torn by violence.

Jails and detention centers are full, and the government is exploring renting a 300-bed prison boat from the Dutch.

Some volunteers say the experience of meeting the migrants, and feeding and helping house them, has altered their own lives.

Hauzeur’s grandmother is from Congo; her father is half-Congolese and came to Belgium at the age of 4. Both are proud of her for her volunteer work, she said, “even if my grandmother is jealous that I know more now about Ethiopia and Sudan than the Congo.”

Another volunteer, Anne-Catherine de Neve, 45; her husband, Yves Hallet, 46; and their three children take in four to six migrants a night, five or six nights a week.

One recent night, at their modest home here about 40 minutes’ drive southeast of Maximilian Park, they sat down with their migrant guests to a dinner of chicken and rice.

“I want to fight against all the fascism we’re seeing,” de Neve said as she cooked. “It’s a fight for social rights, and it’s quite a fight for Belgium, for Europe, for all countries.”

“Now they hear, they see, and they understand something, but I think they’ll have a better understanding later.”

At first, she said, her oldest son, Robin, now 16, wanted to have nothing to do with the migrants. Then one day, she said, “he called me in the park and asked: ‘How many tonight? I’ll make up the beds.'” De Neve has learned something about herself, too.

“Before I would tell myself I wasn’t racist,” she said. “It’s easy to tell yourself that. Being around these migrants in my house I learned a lot about them and about my own views.”

Her husband said he had been nervous at first, even afraid.

“I worried about my children and hid my laptop,” he recalled.

“We’ve lost maybe 20 euros and some headphones,” Yves Hallet de Neve said of the past year. “They are very good people.”

He prefers not to name his employer, but said: “We decided that if we do nothing, then we will be responsible for what happens.”

Charity has, however, created a financial strain. It has been hard for the couple to pay school fees for their own children. So they collect extra and unused food from shops and restaurants to help with the 28 or so dinners they provide every week.

One of her guests on a recent night was a Libyan migrant named Maamar Isneebir, who is known as Omar.

Now 18, Isneebir left his home in Khoms, a coastal city east of Tripoli, a year ago. He claims that when he was 11, he fought against the regime of Moammar Gadhafi.

“There is no safety now,” he said. “There are militias, there is ISIS.”

There is also little work.

Isneebir spent three days at sea, terrified, before reaching Italy, where he was registered. He then made his way to Nice, then Paris, and then to Germany for eight months.

The Germans told him to return to France and when the police came to arrest him, he said, he jumped from a window and made his way to Belgium five months ago. He had hoped to go to Britain, but now says he would like to stay. “It’s unbelievable to have someone open their house to someone they don’t know,” Isneebir said in Arabic, translated by Kassou, who noted quietly that Libyans have only a 20 percent chance of getting political asylum here. “They treat me like their own child.”

Also at the de Neve home that night was Said Adam, 18. He comes from Darfur, and has been in Belgium nearly 10 months, he said.

When Adam came to Italy by boat, he said, “I didn’t know where Belgium is.” Now, he, too, hopes to stay — though he still seems a little lost.

De Neve has few illusions about how much she can do for her guests.

“I cannot help them, really,” she said simply. “The rules are made for them to lose.”