Behind the Race to Publish the Top-Secret Pentagon Papers 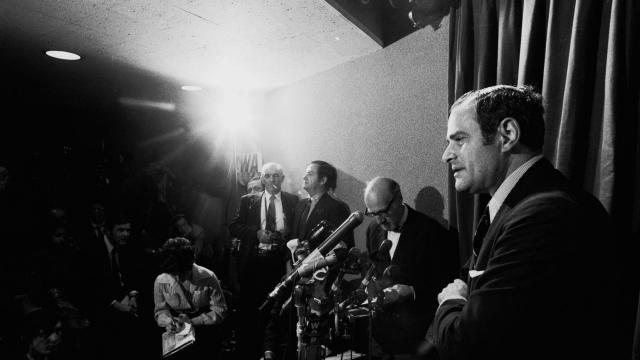 In 1971, Neil Sheehan, a New York Times reporter in Washington, scored the scoop of a lifetime.

Daniel Ellsberg, a former military analyst, had become disillusioned with the Vietnam War and decided to leak a top-secret history of the decision-making behind the conflict. Frustrated by his attempts to have lawmakers draw attention to the cache, now known as the Pentagon Papers, Ellsberg turned to The Times and, later, almost 20 other newspapers.

The saga, which had dramatic consequences for press freedom and the presidency, is the subject of the movie “The Post,” which will be released in some theaters on Friday. Directed by Steven Spielberg and starring Meryl Streep and Tom Hanks, the film depicts the race at The Washington Post to catch up to Sheehan’s exclusive.

The Pentagon Papers had been commissioned in 1967 by Robert McNamara, the defense secretary at the time. The study, written by multiple authors, including Ellsberg, offered a detailed history of the decision-making behind the United States’ involvement in Southeast Asia. It also revealed the Johnson administration’s lies about that involvement.

Here’s how Ellsberg got the Pentagon Papers to the public, first through The Times and later The Post and others.

Ellsberg’s disillusionment with the conflict had simmered for years before boiling over in the summer of 1969, at a conference on resisting the war, according to his 2002 book, “Secrets: A Memoir of Vietnam and the Pentagon Papers.”

There, a man named Randy Kehler gave a stirring talk about resisting and preparing to be jailed. Devastated by the speech, Ellsberg escaped to a men’s room where he remained, crying, for more than an hour.

“Then it was as though an ax had split my head, and my heart broke open,” he wrote. “But what had really happened was that my life had split in two.”

The phrase “we are eating our young” kept entering Ellsberg’s mind, according to the memoir. That evening, he realized that he had the power to do something.

A few weeks later, on the night of Oct. 1, he opened the safe in his office at the RAND Corp., a nonprofit research institution, and began sneaking out portions of the 7,000-page, top-secret report, which he photocopied page by page, night after night.

A Leak in Search of a Home

Ellsberg spent much of 1970 trying to get sympathetic lawmakers to publicize the report, but by early 1971, he had decided that the news media was a better option. At the suggestion of the lawmakers and others, Ellsberg turned to The Times.

“Only The Times might publish the entire study, and it had the prestige to carry it through,” he wrote in his memoir.

Ellsberg said he had worked with Sheehan before, having leaked top-secret news to him in 1968.

So, late on March 2, 1971, Ellsberg called Sheehan at his home in Washington and asked for a place to stay. When Ellsberg arrived, Sheehan showed him to the den, and the two men talked through the night about the war and the Pentagon Papers, according to the memoir.

The Times Races to Publish

After a few weeks of discussions, the pair arranged to transport copies of the documents to New York. They were first stored in the Manhattan apartment of the paper’s foreign editor, James L. Greenfield, who described the episode in the foreword to the book “The Pentagon Papers: The Secret History of the Vietnam War.”

Gerald Gold, an assistant foreign editor at the time, got the team a suite at the New York Hilton Hotel on Avenue of the Americas to use as a makeshift office. There, he, Sheehan and Allan M. Siegal, also an assistant foreign editor, got to work. The adjoining rooms were rented for the staff to sleep in, and other writers joined the effort, including the veteran Vietnam reporters Hedrick Smith, E.W. (Ned) Kenworthy and Fox Butterfield, according to Greenfield.

“Together they made sure that every sentence written corresponded to a reference in one of the documents,” he wrote. “Adding one’s own reporting was unacceptable.”

When the newspaper’s outside law firm, Lord Day & Lord, learned that all 7,000 pages were classified, it warned The Times against publishing them, refused to represent the paper, and nearly told the Justice Department of what was coming, according to Greenfield.

The First Story is Released

On June 13, 1971, after weeks of diligent preparation, Sheehan introduced readers to what the documents revealed.

The story appeared atop the front page of The Times that Sunday, though it was sandwiched among three other pieces: one on the wedding of President Richard M. Nixon’s daughter, another on the New York City budget, and one on tensions between India and Pakistan.

Here is how readers learned about the top-secret documents:

“A massive study of how the United States went to war in Indochina, conducted by the Pentagon three years ago, demonstrates that four administrations progressively developed a sense of commitment to a non‐Communist Vietnam, a readiness to fight the North to protect the South, and an ultimate frustration with this effort — to a much greater extent than their public statements acknowledged at the time.” The Times is widely praised for revealing what the Pentagon Papers contained, but it was not the first to report on their existence. Months earlier, Thomas Oliphant of The Boston Globe had reported that the few men who had read the report in full all supported withdrawing from the war.

The Administration Fights Back

The next day, The Times published its second article on the documents — and heard from an angry Nixon administration.

In a telegram that night, John N. Mitchell, the U.S. attorney general, asked The Times to stop publishing information from the top-secret report, arguing that the newspaper was in violation of a law prohibiting disclosure of government secrets. “Further publication of information of this character will cause irreparable injury to the defense interests of the United States,” he said, according to a contemporaneous Times report on his letter.

The Times refused and the federal government sued the paper. A federal judge then issued a temporary restraining order barring the paper from publishing anything further. The Times complied, but fought to continue the series.

When The Times published its first story that Sunday, The Washington Post found itself with the unenviable task of writing a story sourced completely to a competitor, according to Ben Bradlee, the editor of The Post at the time.

“The Post did not have a copy, and we found ourselves in the humiliating position of having to rewrite the competition. Every other paragraph of the Post story had to include some form of the words ‘according to The New York Times,’ blood — visible only to us — on every word,” Bradlee later wrote of the episode.

But Bradlee’s frustration with what he described as The Times’ “blockbuster” exclusive would be short-lived.

On Wednesday, Ellsberg reached out through an intermediary to Ben H. Bagdikian, The Post’s national editor and a former RAND Corp. colleague, according to Ellsberg’s memoir. That night, Bagdikian flew to Boston.

On Thursday morning, Bagdikian flew back with a pair of first-class seats, one for himself and another for a copy of the Pentagon Papers, according to Bradlee.

“With The Times silenced by the federal court in New York, we decided almost immediately that we would publish a story the next morning, Friday, June 18,” Bradlee wrote, adding that he had had to overcome the objections of The Post’s lawyers.

On Friday afternoon, Bradlee got a call from William H. Rehnquist, the assistant attorney general and future chief justice of the Supreme Court. Rehnquist asked The Post to stop publishing information from the documents. Bradlee refused and The Post, too, was dragged into a legal battle.

As The Post and The Times waged their legal war against the administration, Ellsberg continued to leak the documents to newspapers across the country, according to his memoir. In the end, he gave copies to nearly two dozen newspapers.

On Friday, June 25, 1971, the Supreme Court agreed to hear the case. It was argued the next day and, on June 30, less than three weeks after The Times published its first story on the Pentagon Papers, the court ruled in favor of The Times and The Post, allowing them to continue publishing the material.

“In revealing the workings of government that led to the Vietnam War, the newspapers nobly did that which the Founders hoped and trusted they would do,” Hugo L. Black, one of the justices, wrote in an opinion supporting the publications.

The ruling was a landmark decision for press freedom. It appeared to restrict the government’s use of the legal concept “prior restraint” to censor stories before publication. The decision did not, however, prevent federal officials from continuing to try to limit speech in such ways.

The consequences of Ellsberg’s leak reverberated well beyond the court, too.

Furious about the publication of the Pentagon Papers, Nixon created a team of “plumbers” to prevent similar leaks in the future. The next year, the team broke into the Watergate offices of the Democratic Party, setting off a scandal that would end with the president’s resignation.