Before the story airs: Women in combat 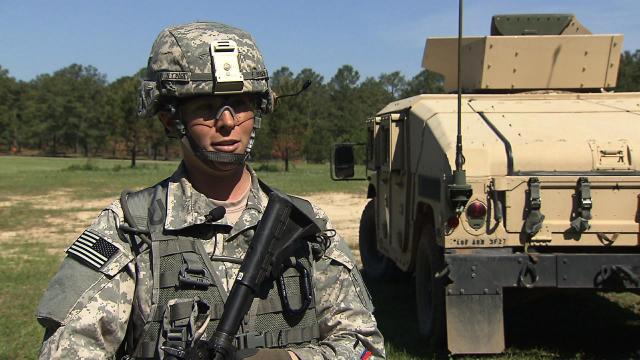 Researching information about women in combat has been fascinating for me. As a former Ranger-qualified Army officer who was stationed at Fort Bragg some 30 years ago, I personally have a sense of what this means to women in the military. It was interesting to talk with the women in my story to get a sense of just how important this issue is to them.

Let's face it: Women have always been in combat. They've been in war zones in any number of support roles. What's happening now will put them on the frontlines of battle, and that's a hot-button issue in the Fayetteville-Fort Bragg community.

There are five traditional combat arms in the Army: infantry, armor, field artillery, air defensive artillery and combat engineers. The Army also has direct combat units in Special Forces and Army Aviation. Until now, women have not been allowed to in direct-combat units, but that's all changed. Two years ago, the Army issued an order that ended the policy that stopped women from being assigned to units that face direct combat. It opened up thousands of jobs in the Army to women.

The idea for the story really took shape when, in January, Defense Secretary Leon Penetta, ordered all combat position be opened to women in all branches of service by 2016. So, I wanted to talk with women who have taken the plunge in the direct combat world of our armed forces. I got help from the public affairs officers within the 82nd Airborne Division and 18th Airborne Corps at Fort Bragg.

One of the women I interview is Staff Sgt. Cassandra Napolitano-Romero. She's an Air Force weathercaster who jumps into missions with her male counterparts. Although she hasn't made any combat jumps yet, she could be called in a moment's notice to head off to war. I was impressed by her enthusiasm for her job and her desire to accomplish missions, just like the men in her unit. Napolitano-Romero is not a large woman, but she carries her parachute, weapon and other weather gear that weighs close to 75 pounds.

Lt. Emily Pohl has taken a position as a platoon leader in the 3/27th Field Artillery Regiment at Fort Bragg. The day I interviewed her, she was in full "battle rattle" in the field checking the safety of her High Mobility Artillery Rocket System (HIMARS) unit. These rockets can take out a grid square 10 miles away. She was confident that she wanted to be in a unit that saw direct combat. I talked with her platoon sergeant. He has been impressed by the young lieutenant's drive but says she lacks experience and that it was his job to keep her straight. I had to laugh out loud because that's exactly what my platoon sergeant said about me, and I was a Ranger-qualified officer!

This is an important story, because many believe that opening the combat arms to women broadens their military careers. There are many who say the way to general stars is through commanding in combat. Military leaders say that since Penetta made his announcement, 22 percent of women in the military have expressed an interest in combat-related jobs. Once fully implemented, some 200,000 jobs that were once only filled by men will be open to women.

Not everyone, however, is happy about the decision, including Marine Capt. Katie Petronio. I didn't get to interview her for my story but read about her. She was inadvertently drawn into combat during two tours of duty in Iraq and Afghanistan. She wrote an article for the Marine Corps Gazette in which she noted: "Five years later, I am physically not the woman I once was, and my views have greatly changed on the possibility of women having successful long careers while serving in the infantry." Petronio says women and men react differently under combat stress. She believes there are clear gender differences in the way men and women handle the physical, mental and emotional burdens of combat.

Another fascinating thing about this issue is that, for the first time, the Army and Marines are modifying their physical training standards. But some say the modifications may make it tougher for some men to qualify.

As we wind down war in Afghanistan, it's important to remember we've been at war in this country since the first Gulf War in 1990. The military is in the process of drawing down the size of American armed forces. If there is a need to rev up our military machine, the decisions we make today about which players will be on the frontlines will impact our fighting force for years to come.

I invite you to watch my special report on women in combat and see the new faces of our country's fighting force. Tune in Wednesday at 5:30 p.m.