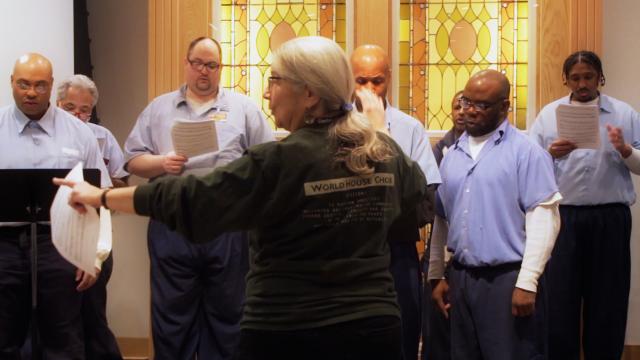 NEW YORK — Few opera choruses are as moving as the one a group of prisoners sings in Act 1 of Beethoven’s “Fidelio.” Released temporarily from their cells, the inmates almost whisper a hymnlike paean to liberty: “Oh, what a joy to breathe freely again in the open air.”

The transformation from oppression to freedom is at the core of “Fidelio,” which the small, adventurous company Heartbeat Opera is presenting through May 13 at the Baruch Performing Arts Center in Manhattan. There, the recently recorded voices of choirs from Midwestern correctional facilities will join together in Beethoven’s soaring Prisoners’ Chorus.

To bring the work to life in the era of Black Lives Matter, Heartbeat’s co-artistic director, Ethan Heard, and its co-music director, Daniel Schlosberg, are setting their production within today’s American criminal justice system, which disproportionately incarcerates people of color.

With “Fidelio” and a concurrent #MeToo-inflected “Don Giovanni,” Heartbeat is continuing in the vein of its staging last year of “Madama Butterfly,” which tackled issues of yellowface, Orientalism and clichés of geisha culture. That Puccini opera, Heard said in a recent interview, “felt timely and plugged into a contemporary conversation, and I wanted to find another opera that we could do something like that with.”

He was struck anew by “Fidelio,” which Beethoven composed in the wake of the French Revolution. The opera dramatizes a wife’s efforts to rescue her wrongfully incarcerated husband by disguising herself as a man and infiltrating his prison. “It felt like, ‘OK, this is right for 2018,’” he said.

In Heartbeat’s adaptation, the heroine is Leah (Leonore, in the original), whose husband, Stan (Florestan), a naturalized citizen and Black Lives Matter activist, has been arrested at a protest and unjustly imprisoned. Some of the opera’s smaller roles have been excised, and Schlosberg has arranged Beethoven’s score for two pianos, two cellos, two horns and percussion — a chamber ensemble intended to emphasize musically the opera’s story of heroism amid darkness.

The musicologist Naomi André, in her coming book “Black Opera: History, Power, Engagement,” describes how operas in the United States and South Africa — both countries with problematic racial histories — are being used to “tell an alternative story of racial experience in counterpoint to the dominant culture.” The power of opera, André writes, “lies in what they offered to their original audiences as well as what they can still offer us today.”

There is historical precedent for Heartbeat’s changes to “Fidelio” and its exploration of the opera’s political relevance. Beethoven, a staunch supporter of the ideals of liberty, equality and fraternity, was drawn to Jean-Nicolas Bouilly’s Revolution-era play “Léonore, ou l’Amour Conjugal.” But Beethoven’s librettist, Joseph Sonnleithner, had to sidestep Austrian government censorship by setting the opera in 16th-century Spain and stressing the theme of “wifely virtue” rather than civil rights.

Dissatisfied with the unsuccessful premiere in 1805, which coincided with Napoleon’s occupation of Vienna, Beethoven revised “Fidelio” the next year, condensing three acts to two. When he and poet Georg Friedrich Treitschke revamped it again in 1814 to coincide with the Congress of Vienna, where European leaders were mapping out the post-Napoleonic geopolitical landscape, Beethoven added a new choral ending that threw greater symbolic weight onto the newly liberated prisoners.

“The fact that the opera went through so much revision gave us license to say, ‘You know, the music is not fixed,’” Schlosberg said. “It’s not perfect just because it’s a couple hundred years old. So it’s great to struggle with it.” While 19th-century audiences viewed “Fidelio” as a fundamentally domestic tale, 20th-century conductors and directors, beginning with Gustav Mahler and Alfred Roller in 1904, began to present the opera as a weighty political allegory. Mahler judiciously trimmed first-act music he deemed inconsequential and inserted Beethoven’s dramatic “Leonore” Overture No. 3 into the second act, while Roller’s stylized, partially abstracted scenery lent the story a timeless universality.

Many post-World War II productions became explicitly political, more timely than timeless. In a rebuke of Nazi oppression, “Fidelio” became the opera of choice to reopen Germany and Austria’s opera houses. And in a divided Germany during the Cold War, directors on either side of the Iron Curtain transposed “Fidelio” onto settings ranging from Soviet gulags and South American juntas to German concentration camps.

Directors took particular liberties with the opera’s libretto. Rejecting Beethoven’s spoken dialogue as well as the sung recitatives that had become a standard alternative, Wieland Wagner opted for a narrator in his 1954 production in Stuttgart, Germany. Other directors substituted the dialogue with 20th-century political verse.

Heartbeat’s production also replaces the spoken text. Heard worked with playwright Marcus Scott to transform the German dialogue into contemporary American speech. (In one scene, Leah pleads with the prison administrator to briefly end a lockdown: “They’re people, Marcy. People who made mistakes. Some people whose only mistake was being poor.” She also hints at race as a factor.)

“We had the opportunity to bring a black playwright into the room,” Heard said, “which the project needed.”

A graduate school classmate of Schlosberg had organized a choir at a prison in Minnesota, and she put the collaborators in contact with other choruses in Ohio, Iowa and Kansas. In March, the team rehearsed in person with the Oakdale Community Choir, Kuji Men’s Chorus, Ubuntu Men’s Chorus and East Hill Singers.

Behind concrete walls and metal fencing, they met enthusiastic artists. One Ubuntu chorister proudly displayed his tattoo of Johann Sebastian Bach. At Oakdale Prison, the warden even offered acting tips. Audio and video footage of the groups (HOPE Thru Harmony Women’s Choir and Voices of Hope also participated) will be stitched together to create Beethoven’s sublime music.

“These choirs are about accessing humanity through community,” Schlosberg said. “And these choir directors have found a way to nourish the idea that these are people.”

Through May 13 at Baruch Performing Arts Center, Manhattan; heartbeatopera.org.