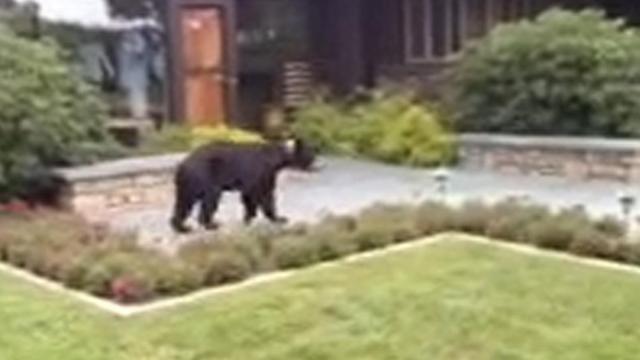 Asheville, N.C. — What appeared to be a rather large black bear visited Gov. Pat McCrory at the governor's Western Residence this weekend.

"One of our neighbors stopped by to see us this weekend up in Asheville…what a cool encounter!" McCrory, or someone on his staff, posted on his official Facebook page.

In the video, which was taken by a member of McCrory's security detail, the bear wanders across the property, seemingly quite unconcerned by the nearby humans. McCrory can be heard in the audio telling the trooper, "Be careful, don't do anything stupid."

According to Ryan Tronovitch, a spokesman for the governor, bears are frequent visitors to the residence. The first lady has seen them from time to time, but this was the governor's first encounter, Tronovitch said.

The state Wildlife Resources Commission and North Carolina State University have been tracking the bear, a 140-pound female, since it was tagged May 8 in the Chunn's Cove area of Asheville, Tronovitch said.