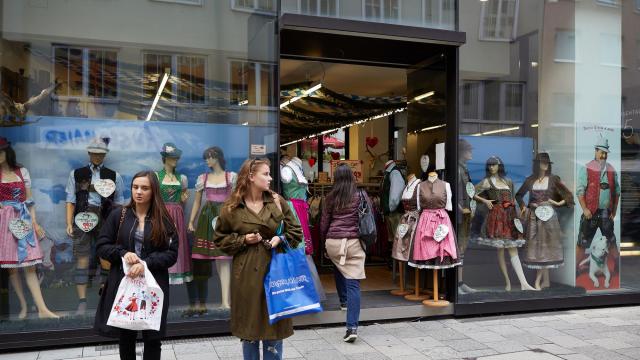 MUNICH — Hip-hop blared from oversized speakers. Half-finished beer glasses teetered precariously along the bar, and a scrum of teenage bodies writhed on the dimly lit dance floor. It was a regular night out in hip urban Munich.

And everyone was in 19th-century Alpine peasant dress.

In Bavaria in 2018, tradition is trendy and custom is cool. Bavarian teenagers, who once wore jeans and T-shirts in Oktoberfest season, are going clubbing in dirndl and lederhosen.

“Ten years ago, we rarely saw a dirndl in the disco,” said Dierk Beyer, a manager at Neuraum, a popular nightclub near the site of the Oktoberfest. “Now it’s normal.”

The dirndl (pronounced DEERN-del), a low-cut, tightly laced traditional dress, and lederhosen, its male counterpart of knee-length deer leather pants, were once considered the dusty uniform of older, more conservative folk in the countryside.

After years of edging into the mainstream, they are now all the rage with millennials, who are evolving tradition and folklore into a youth culture that can surprise outsiders.

“I love your pretzel nose stud!” Martina Schulze, a lanky 17-year-old with a baseball cap and forest-green dirndl, shrieked into the ear of her best friend — who promptly returned the compliment: “Cool edelweiss cap!”

National identity may be a popular rallying cry for conservatives and a resurgent far-right. But many young Bavarians say they are not talking politics by celebrating their heritage — they are claiming it back and at times subverting it.

On a recent night, the dance floor of Neuraum was a festival of dirndl in its endless varieties. There was a black goth dirndl cascading over tattooed calves. Next to it, a gaggle of pink and baby blue ones worn with sneakers. Young men sweating in woolly calf warmers and felt hats were grinding up to young women in flowery aprons.

Even outside Oktoberfest season, which finished Sunday after 16 days of drunken beer tent fun, the cool kids wear pretzel-shaped studs and edelweiss caps. Sausages and dachshunds (yes, dachshunds) are equally popular motifs as images of Bavarian identity — as is “1516,” the year the first Bavarian law regulating the ingredients of beer was passed.

Some hip work places have reportedly instituted “Dirndl Fridays” all year round, while Bavarian bands like Liquid rap in hipster beards and thick Bavarian dialect.

The dialect, once discouraged in city nurseries and schools, is itself experiencing something of an urban revival. As Michelle Rödel, 19-year-old apprentice teacher recovering at the bar in a burgundy dirndl, put it: “Hoamad rocks.”

“Hoamad” is dialect for “Heimat,” a fuzzy but evocative German term roughly meaning home, identity and a sense of being rooted in familiar landscapes — perhaps by wearing a dirndl or lederhosen.

For years, the term was tainted by a lingering association with the Nazi era.

Hitler, who started his political career in Munich, had been a fan of dirndls. The now familiar design was popularized in the 1930s. Jewish women were told not to wear them.

Later, folk fashion became synonymous with the soft nationalism of the Christian Social Union, the Bavarian sister party of Chancellor Angela Merkel’s conservatives. “Basically, if someone wore a dirndl or lederhosen, you assumed they voted CSU,” Rödel said.

These days even the 33-year-old co-leader of the liberal pro-refugee Greens in Bavaria has been campaigning in a dirndl before the closely watched state elections on Sunday.

“It has nothing to do with politics,” insisted Rödel, the apprentice teacher, as she took a break on the edge of the dance floor, fanning herself with her pink apron. She owns seven dirndls and a heimat hoodie. “In Bavaria, we are just proud to be Bavarian,” she said.

The dirndl boom has become a mass phenomenon among teenagers and young adults, said Lola Paltinger, an upmarket dirndl designer.

“When I moved to Munich, no one I knew went to the Oktoberfest in a dirndl, let alone a nightclub,” Paltinger said. “Now it is expected.”

Even more recent, she said, is the heimat-themed streetwear. “That’s a new evolution,” she said.

Cinelli started printing Bavarian dialect onto T-shirts in 2012. He had the idea after going shopping in a department store and despairing over the ubiquity of inane American slogans featured on most T-shirts he tried on: “College Football Team,” he recalled, and “Highway Patrol.”

“It was all completely meaningless stuff,” he said. “That gave me the idea to print Bavarian dialect that has some meaning to people here.”

Young, open-minded Bavarians want to express their identity, but “without shutting others out,” said Cinelli, a Munich native whose father is Italian.

“In times of increasing globalization, people want to return to their roots,” he added.

Cinelli founded Oberlandla, an online label of what he calls “Bavarian streetwear.” He sells T-shirts featuring skulls with an edelweiss flower between their teeth and slogans like “Mei Dirndl is in da Wäsch,” or “my dirndl is in the wash.”

Under the towering eye of the 19th-century statue of Bavaria, a female personification of the Bavarian homeland with a giant lion by her side, a group of high school students met at the Oktoberfest one recent afternoon, ready to party in style.

Marlene Kinseher combined a dirndl from the flea market with a leather jacket and chunky black boots. Martha Koletzko said dirndls were the only kind of dress she wears, because “they work for every female shape.”

Helena Link, also part of the group, said she used to go in jeans, but “it just wasn’t the same.”

“When you’re in the beer tent, standing on the benches and everyone sings the same songs, you really feel that you’re part of something,” she said. She recently bought a dirndl at Aldi for 30 euros, or $35. “In jeans you just don’t get into it in the same way.” There is a degree of peer pressure, they admit — and sometimes a whiff of exclusion, too.

Even Rödel, whose parents moved to Bavaria from the neighboring German state of Thuringia three decades ago, wishes she were “properly Bavarian.”

“You’re only really Bavarian if your parents were born in Bavaria, too,” she explained.

Sumia Ansari, an Afghan-Bavarian, sported cutoff lederhosen bought from a secondhand store instead of a dirndl.

Ansari recalled feeling alienated the first few times she donned a dirndl during village fetes. “It felt like carnival,” she recalled. “People would look at me and say, ‘Do you even speak German?'”

It is that kind of statement that makes Florian Schönhofer’s skin crawl.

Schönhofer runs Kosmos, a bar near Munich’s central station, which he has turned into a “lederhosen-and-dirndl-free zone.” At the entrance, a laminated sign puts a bright red cross over a drawing of the familiarly shaped leather pants. A bouncer stands ready to turn away anyone who comes in traditional garb.

“Anytime there is a large group of people wearing the same uniform and singing the same songs, the dynamic very quickly becomes exclusive and potentially aggressive,” he said.

Plus, for many, he said, “wearing a traditional outfit is a license to get completely hammered whilst still feeling virtuous.”

Schönhofer makes one exception: “If you are sober enough to take your lederhosen off, you can come in underpants.”