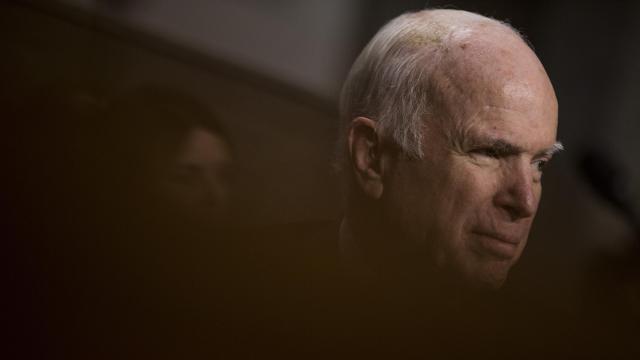 EDITOR'S NOTE: Frank Bruni is an op-ed columnist for The New York Times. He has been both a White House correspondent and the chief restaurant critic.

Sen. Lindsey Graham once described his friend John McCain as someone who would “run across the street to get in a good fight.”

McCain has waged it in public remarks since Trump’s election, including a speech in Philadelphia last October, when he pushed back against the “half-baked, spurious nationalism” that was gripping too many Americans and lamented the abdication of America’s moral leadership in the world.

He wages it in a forthcoming book, “The Restless Wave,” an advance excerpt of which includes his complaint that Trump fails “to distinguish the actions of our government from the crimes of despotic ones” and that he prioritizes “a reality-show facsimile of toughness” over “any of our values.”

The fight isn’t really between two men. It’s between two takes on what matters most in this messy world. I might as well be blunt: It’s between the high road and the gutter. McCain has always believed, to his core, in sacrifice, honor and allegiance to something larger than oneself. Trump believes in Trump, and whatever wreckage he causes in deference to that god is of no concern.

“Trump is in every single way the opposite of John McCain,” Bob Kerrey told me recently. “He may be the opposite of every president we ever had.” Kerrey and McCain both served in Vietnam, they overlapped in the Senate and they stay in touch. So Kerrey knows that Trump has caused McCain no small measure of anguish, but less because of Trump’s crassness and the daily tragicomedy of his administration — this, too, shall pass — than because of “the impact on democracy.” It could be enduring, and it could be profound.

That’s why a patriot like him could never sit this one out.

Trump finds McCain’s biography and example threatening; that was obvious in an insult in the summer of 2015, just a month into Trump’s presidential campaign. At a forum in Iowa, Trump mocked McCain’s many years as a prisoner of war in Vietnam — years during which McCain refused offers of release because he didn’t want to be a tool of North Vietnamese propaganda — by saying: “He’s not a war hero. He’s a war hero because he was captured. I like people that weren’t captured.”

McCain brushed it off. “He never mentioned it,” Gen. David Petraeus, who sits on the board of the McCain Institute for International Leadership at Arizona State University, told me. “I raised it with him one time. I said, ‘I just want to assure you that everyone I know — and I — regard you as an extraordinary hero.’ He said: ‘I know. It’s nothing.'”

It’s all too easy, in the context of Trump, to idealize political leaders who came before him and airbrush their flaws. McCain has his share, including the occasional rashness reflected in his selection of Sarah Palin as a running mate in 2008. Did she help pave the way for Trump? What a cruel irony if so.

But it’s also true that two Republican titans near the end of their days provide crystalline counterpoints to Trump — they’re statesmen to his salesman. One is George H.W. Bush, the former president, and my colleague Bret Stephens recently wrote a gorgeous meditation on the dichotomy of Bush’s versus Trump’s approach to leadership.

The other is McCain, who presents a similar dichotomy.

CNN reported Wednesday that Trump, to answer questions about his health when he was a candidate, dictated that ludicrous, half-page doctor’s note that raved about his “astonishingly excellent” condition. McCain answered health questions during the 2008 campaign by making several doctors from the Mayo Clinic available to reporters and by giving some reporters a look, albeit time-limited, at pages upon pages of his actual medical records.

Trump cited bone spurs in his heels to avoid Vietnam. McCain, a Navy pilot, had an arm broken and ribs cracked during the torture that he endured while imprisoned by the North Vietnamese.

Trump jump-started his political career with the lie that Barack Obama was born outside the United States and thus an illegitimate president. During the last weeks of Trump’s presidential campaign, he branded Hillary Clinton a criminal and encouraged supporters to chant, “Lock her up.”

During the last weeks of McCain’s 2008 presidential campaign, he grew so concerned about supporters’ hostility to and misconceptions about Obama that he corrected and essentially chided them. “He is a decent person,” he told a man who had volunteered that he was “scared” of an Obama presidency. When a woman at that same campaign event chimed in that Obama was “an Arab,” McCain told her that she was wrong. “He’s a decent family man,” he added.

Trump is never to blame and quick to malign onetime allies who have grown inconvenient. McCain never badmouthed Palin, despite ample reason. “John McCain doesn’t throw people under the bus for his decisions,” Petraeus said, adding, when I asked him how rare that was, “Oh, man, just look around.”

Trump demands instant gratification. McCain served for four years in the House before his three decades in the Senate, during which he worked his way up to his cherished post as chairman of the Senate Armed Services Committee. He tried — and failed — to get the Republican presidential nomination in 2000 before succeeding eight years later.

Trump invites pity for all the slights he suffers plus plenty that he only imagines, and he readily boasts about achievements actual and hallucinated. “I don’t have a complaint,” McCain says in his book, which was written with Mark Salter and will be released on May 22. He’s grateful, he adds, that he “made a small place for myself in the story of America.” A small place. I sometimes forget, thanks to Trump, what the music of understatement sounds like.

“There is a scarcity of humility in politics these days,” McCain writes. I wonder if he has anyone particular in mind. No, that’s a lie: All of us know precisely which someone he has in mind, the same person in his thoughts when, in Munich in February 2017, he expressed alarm about an “increasing turn away from universal values and toward old ties of blood and race,” about “the hardening resentment we see toward immigrants” and about “the growing inability—and even unwillingness—to separate truth from lies.”

In his new book he calls out Trump by name, saying that the president’s cries of “fake news” are “copied by autocrats who want to discredit and control a free press” and that his lack of empathy for refugees is “appalling.” “The world expects us to be concerned with the condition of humanity,” McCain writes. “We should be proud of that reputation. I’m not sure the president understands that.”

Kerrey said that “history is not going to be kind to those who were silent” about Trump’s attack on truth, norms, civility and so much else. Has McCain been quite vocal enough? “I think history will say that he was in the top 10 percent of the class,” Kerrey said. “Could have been higher.”

Donald Critchlow, a professor of political science at Arizona State University, told me: “If Trump’s presidency fails, Senator McCain will be remembered as a Jeremiah who warned that the party had taken a road to perdition.” And if it succeeds? Then he is “part of an old guard” vainly resisting a new day, Critchlow said.

Either way he has my gratitude. Although I disagree with many of his political views, including his too-keen itch for foreign intervention, that doesn’t prevent me from admiring him enormously. Nor should it, a point that he makes in his book.

“I don’t remember another time in my life when so many Americans considered someone’s partisan affiliation a test of whether that person was entitled to their respect,” he writes, ruefully, adding that while Biden, Ted Kennedy and other Democratic friends of his never voted for the same candidate for president as he did, his friendships with them “made my life richer, and made me a better senator and a better person.”

Such grace is unimaginable from Trump. That’s why it’s so vital that McCain is using his waning time to model it.