Battle over state elections board rages on 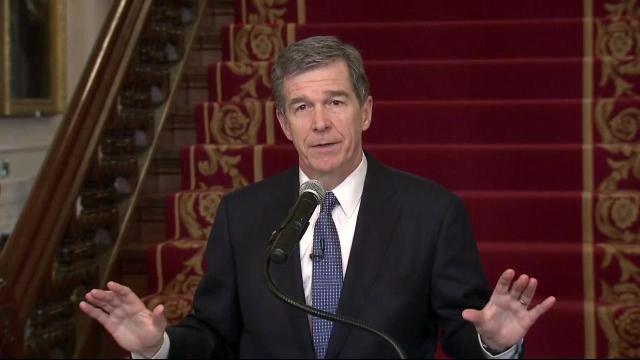 Raleigh, N.C. — Two days before a bill fixing problems with state class sizes was set to become law, Gov. Roy Cooper's administration on Tuesday filed a legal challenge to a provision of the measure dealing with the state elections board.

The request for a temporary restraining order is the latest shot in a long-running war between the Democratic governor and Republican legislative leaders over the elections board that even predates his inauguration.

In a special December 2016 session, Republican lawmakers created an eight-member State Board of Elections & Ethics Enforcement that would be evenly divided between Republicans and Democrats. The elections board has traditionally had five members, with the majority belonging to the governor's party.

Cooper challenged the new board in court, arguing that lawmakers overstepped their authority and were preventing him from carrying out his duty to ensure elections laws are properly carried out in North Carolina.

The state Supreme Court agreed with Cooper in January and sent the case back to a panel of three Superior Court judges who initially heard the case for a final order. That order, however, only voided the section of the 2016 law dealing with how members would be appointed to the new board, leaving the rest of the law intact.

Cooper tried to get the Supreme Court to reopen the case and strike down the whole law, allowing the five-member elections board to resume operations. The high court turned aside that effort on Tuesday.

So, the administration is going to court over Republican lawmakers' efforts to establish a new system for appointing people to the elections board.

Lawmakers last month tacked a proposal for a nine-member board – four Democrats and four Republicans would pick someone not affiliated with either party to fill the final seat – onto a bill that phases in caps to elementary school class sizes that have created staffing, space and financial problems for school districts.

"We remain committed to protecting people’s right to vote, and this part of the new law compromises that," Porter said in an email.

Although he disagreed with the elections board section and another unrelated provision in the bill, Cooper had said he would allow the bill to become law without his signature because he believed school districts needed the relief from the class size caps lawmakers put in place two years ago. The law is set to become official on Thursday.

"Today’s lawsuit – filed against a bill the governor pledged he would allow to become law – tries to stop not only the bipartisan elections enforcement that 80 percent of North Carolinians want but potentially also jeopardizes class size funding and more than $57 million in additional funds for school children in eastern North Carolina," Rep. David Lewis, R-Harnett, and Sen. Ralph Hise, R-Mitchell, said in a joint statement.

"Just last week, I offered to meet with Gov. Cooper to reach a consensus on the bipartisan board through dialogue and discussion, but sadly he demonstrated that he’d rather sue than govern," Lewis added.