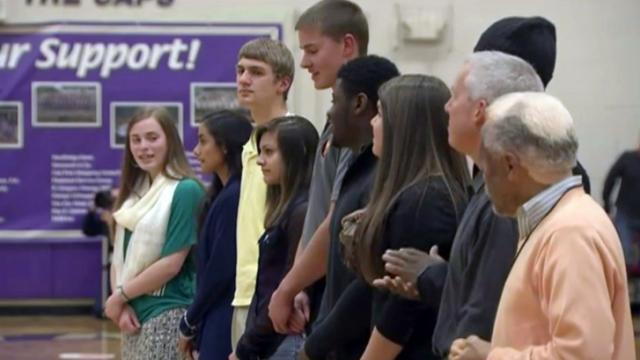 Raleigh, N.C. — Some of the biggest talent in high school basketball competes in the 42nd HighSchoolOT.com Holiday Invitational tournament in Raleigh this week, and several of the players will be playing big-time college basketball in the next few years.

Ten others who were recognized Thursday night are making their college dreams a reality in another way. They were awarded $5,000 scholarships by the Triangle Educational Advancement Foundation – awards funded by tournament ticket sales.

Dakarai Shipp, one of the scholarship recipients, was homeless for several months during his senior year at Millbrook High School in Raleigh.

"I lived in my truck at a campsite at Umstead State Park," Shipp said, adding that his mother also lived in the truck.

But he kept his head and his grades up and is now attending the University of North Carolina at Greensboro. He made the dean's list during his first semester and wants to go into sports medicine.

"I can believe I can do better, and I want to do better," Shipp said. "I have a lot of supporters, people who think I can do great."

Jake Coats, who like Shipp ran track in high school, also received a TEAF scholarship. A graduate of Wake Forest-Rolesville High School, he now attends UNC-Charlotte and wants to follow his father's footsteps and become a firefighter.

The other eight scholarship recipients are as follows:

In nearly 20 years, TEAF has awarded more than $1 million in scholarships.