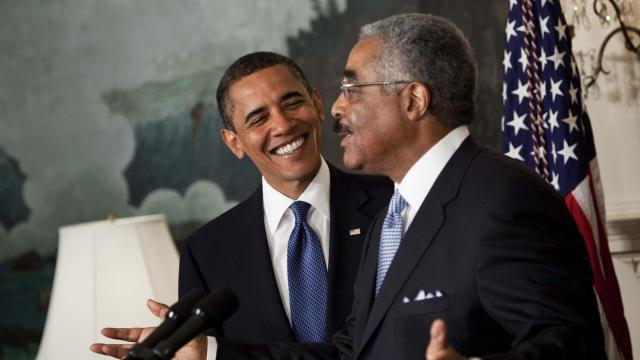 Barry Rand, who in 1999 became one of the few African-American chief executives of a Fortune 500 company when he took control of Avis, the rental car company, after being passed over for the top job at Xerox, died Nov. 7 in an assisted living facility in Norwalk, Connecticut. He was 74.

His wife, Donna (Holt) Rand, said the cause was Alzheimer’s disease.

Running a major corporation was a critical goal for Rand. He had spent 30 years at Xerox, rising to executive vice president of operations while developing a reputation as a strong salesman and motivator who helped build a highly diverse workplace.

“I always knew that it wasn’t going to be handed to me, but I chose to hang in there because, if I left, that meant that I wasn’t going to win for sure,” Rand recalled in an interview for the book “Take a Lesson: Today’s Black Achievers on How They Made It and What They Learned Along the Way,” by Caroline V. Clarke (2001).

Rand stayed at Xerox until November 1998, while methodically hunting elsewhere for a chief executive position. His wife said that he did not think race played a part in Allaire’s decision.

A year later, Rand was hired as the chairman and chief executive of Avis Group Holdings, certain that his skills were transferable from a document-processing company to rental cars.

“The issue is managing change, not products, and I’ve always been a change agent,” he told The New York Times in 1999.

“The fact that we’re in this situation is a real problem and embarrassing for corporate America,” Chenault said at The New York Times DealBook conference in late 2017. He retired soon after.

Rand was credited with overhauling Avis’ operations and aggressively building its fleet-management business. But he did not stay at the company long. He resigned in March 2001 when Avis was acquired by the Cendant Corp.

“I didn’t sign on to be a division president,” he told The Wall Street Journal.

Addison Barry Rand was born Nov. 5, 1944, in Washington. His mother, Helen (Matthews) Rand, was an elementary-school principal, and his father, also named Addison, was a postal clerk.

After graduating from American University with a bachelor’s degree in marketing, Barry got job offers from Xerox and several other companies whose executives he had contacted at a job fair in Washington.

He was hired in 1968 as Xerox’s first black salesman in Washington and, over the years, formed support groups with other minority employees to sharpen their skills and share their experiences, he said in a 2010 interview with the alumni magazine of Stanford University. (He received a master’s degree in management science there while working at Xerox.) In 1970, he was rewarded by Xerox with a plaque for being his region’s top salesman.

But his father was unimpressed and asked him where the monetary reward was.

“I stood in front of him dazed by his question,” Rand wrote in an essay about his Xerox career that was cited by the Stanford publication. His father, he recalled, told him, “Don’t let anybody fool you again.”

That advice inspired him to set goals, chief among them becoming a chief executive. Having achieved that at Avis, he was subsequently hired for the top job at Equitant, an outsourcing company, and, after a brief retirement, at AARP, which is known for its vigorous lobbying for older Americans.

The difficulties aging people face had become more apparent to him after he helped care for his father, who lived with him during the last eight years of his life.

“He realized that without family help and extra support, it could be very tough for aging people,” his wife said in a telephone interview.

At AARP, where he stayed until 2014, Rand supported passage of the Affordable Care Act and responded to accusations from House Republicans that AARP, a nonprofit organization, would benefit financially from the health care overhaul through the Medicare supplemental health policies it sold with United Healthcare.

“We have long maintained that we would forgo revenue in exchange for lifetime health and financial security for all older Americans,” he said in congressional testimony in 2011. He added, “It is very likely that under the Affordable Care Act, the AARP-branded insurance plans for 50- to 64-year-olds will become obsolete, and we will no longer receive revenue from those plans.”

In addition to his wife, Rand is survived by a daughter, Allison Rand, and a son, Christopher. Looking back at his decision to stay at Xerox in the hope of becoming its chief executive, Rand said he should have taken outside opportunities more seriously before he left.

“My goal was too narrow,” he said in “Take a Lesson.” “It was CEO at Xerox as opposed to CEO, what I could do as a CEO and where that could lead me. I was in danger of defining my success or failure based on one job at one company.”

He added: “There’s a huge world out there. I lost sight of that.”