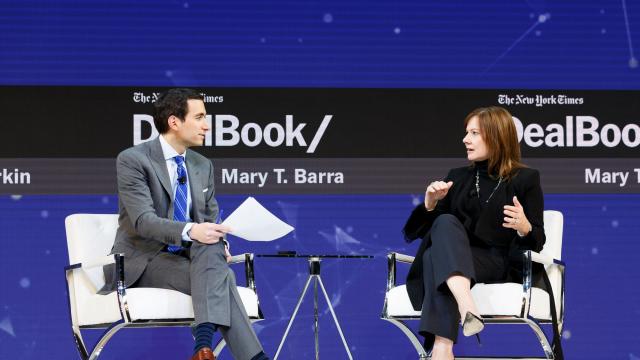 Mary T. Barra, chief executive of General Motors, said the company is “on track” to roll out a ride-sharing service in 2019 that would rely on autonomous vehicles, a development that would advance the already-heated race to bring a self-driving car to market.

“We’re on track, with our rate of learning, to be able to do that next year,” Barra said at DealBook’s Playing for the Long Term conference. She added that the company had a strategy to show how its vehicles are safer than human drivers. The vehicles can run safely at speeds of up to about 30 mph, and the service will be limited to a small geographical area, Barra said.

She did not say where the service would operate but noted that the company has been testing in San Francisco.

Autonomous vehicles rely on what Barra described as “a suite of sensors,” including radar, cameras and a technology known as LIDAR, which uses near-infrared light to detect the shape of objects around it. GM is focused on advancements to LIDAR, which will drive down costs and enable the vehicles to travel at higher speeds, she said.

After substantial investments this year from SoftBank Group of Japan and Honda, GM’s autonomous vehicle unit, Cruise, is now valued at $14.6 billion.

Barra also explained why GM pushed back last week against a Trump administration proposal to roll back Obama-era fuel economy standards. The company instead called for a national gas mileage standard that would mandate a percentage of carmaker sales come from zero-emissions vehicles.

“We do believe in an all-electric future,” she said, before warning that a patchwork of state regulations would only slow down advancements.

“That’s inefficient, and that’s going to direct costs to the consumer, which will lead to slower adoption,” she said.