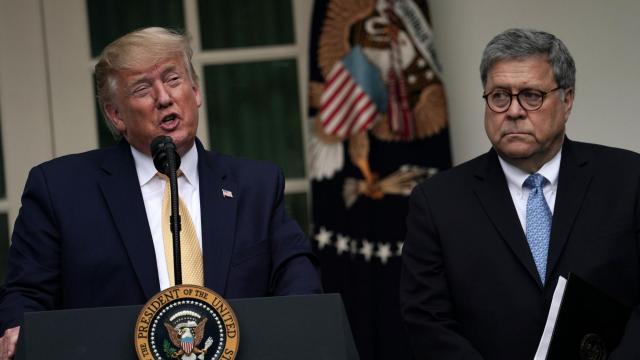 Barr said in an interview with ABC News last week that Trump's tweets and statements on the Justice Department's work were making his job impossible. But Trump backed his attorney general in comments on Tuesday.

"I have total confidence in my attorney general," he told reporters before departing Washington for California. "I think he's doing an excellent job. He's a strong guy." Trump conceded, however, that he was making Barr's job more difficult.

"I do make his job harder," Trump said. "I do agree with that. I think that's true."

Barr was at the White House Tuesday for a previously scheduled lunch with White House counsel Pat Cipollone, according to a Justice Department official and a source familiar with the matter.

The Washington Post was first to report that Barr has considered resigning. The Justice Department did not immediately respond to a request for comment.

News that Barr has considered resigning follows days of mounting scrutiny over his role in the fraught decision to publicly disavow prosecutors who had sought a stiff punishment for Roger Stone, a longtime friend of Trump.

The President had tweeted congratulations Barr for the move, provoking outcry from Democrats who demanded an investigation. The four career attorneys who had worked on the Stone case and signed off on the original sentencing memorandum each withdrew from the case on Tuesday in an apparent protest.

In his ABC News interview Thursday, Barr explained the discrepancy at the heart of the public spat this week over the Stone sentencing and blamed a late night tweet from the President for creating the environment that evoked outrage from the left.

The decisions prompted more than 2,000 former Justice Department officials to sign a statement calling on Barr to resign.

Yet, even amidst the heightened scrutiny, soon after Trump's vote of confidence Tuesday, Senate Majority Leader Mitch McConnell, House GOP Leader Kevin McCarthy and Senate Judiciary Chairman Lindsey Graham released a rare joint statement in support of Barr, saying that "suggestions from outside groups that the Attorney General has fallen short of the responsibilities of his office are unfounded."