Baroo Has Closed, but Leaves a Rare Culinary Legacy in Los Angeles 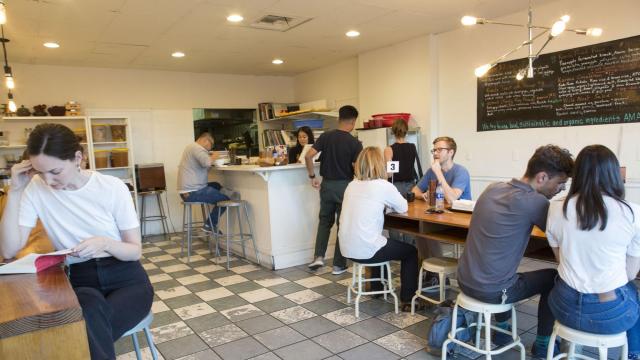 LOS ANGELES — In a Hollywood strip mall, with a cramped kitchen and a shoestring budget, the tiny restaurant Baroo brought a singular, experimental spirit to this city’s food scene.

Shortly after Kwang Uh and Matthew Kim opened it in 2015, the restaurant critic Jonathan Gold endorsed Uh’s cooking in a review, praising his use of fermentations to build flavors. Sure, you ordered from a hand-scrawled chalkboard, then paid at the counter before finding your own seat. But in 2016, Bon Appétit named Baroo one of the 10 best places to eat in the country.

As Uh’s star quickly rose, the understaffed restaurant scrambled to keep up with lines out the door. All the while, Uh and Kim kept their prices low relative to the food’s quality and complexity — most dishes were around $10.

The math eventually caught up with Baroo, which served its last meal Saturday. But the restaurant leaves a compelling legacy. Until the end, it pulled off a rare balancing act in dining culture: warmth, affordability and experimentation, all hand in hand.

“If I did the same concept in Korea, I don’t think I’d have had the same support,” said Uh, who is 37 and came to the United States from Seoul in 2007 to attend the Culinary Institute of America in Hyde Park, New York.

Baroo served fresh noodles with oxtail ragù and gochujang, right alongside a grainy, beet-stained porridge with koji. The food was neither Korean nor Italian. It was experimental, laborious to prepare and technically accomplished, but simply presented and priced like a cafe sandwich. It was, in short, a hard-to-categorize restaurant, epitomizing the delicious idiosyncrasies of Los Angeles.

For local chefs, Baroo was the working model of a creative vision executed on one’s own terms.

The chef Akira Akuto worked there in 2016. With his business partner and co-chef, Nick Montgomery, he now owns and operates Konbi, a small, Japanese-style cafe that opened in early October in Echo Park. “What resonated was that the food was ambitious, without apology or explanation,” Akuto said.

Before opening Konbi, he and Montgomery ran a pop-up inside Baroo on Sundays, when the restaurant was closed. They refined and developed their own ideas there, along with one of their current best-sellers, a sandwich filled with a delicate omelet that has been poached in dashi.

Minh Phan, the owner of Porridge & Puffs, which opened about a month ago in Historic Filipinotown, was a regular who admired Baroo’s chef-driven spirit. “They were always so understaffed, it was always a little chaotic, but there was also this sense of solidarity,” Phan said. “I felt an inspiration and a kindred spirit there.”

Uh said that while the rent had barely risen at all since 2015, and business hasn’t slowed down, Baroo was never sustainable. Though he and Kim hired part-time workers to help in the kitchen and work the register, one of the partners had to be on site at all times for the restaurant to function.

“If we hired more people, we could work less, but then we couldn’t pay ourselves,” Uh said during one of Baroo’s last days, still struggling with the paradox. Being understaffed meant constant burnout, unexpected closings, general havoc and very little time to strategize and grow the business.

Before Baroo, Uh had long dreamed of opening a restaurant, but several investors looked at his résumé and passed. It had some big names on it, including the world-renowned Noma, in Copenhagen, but it was just a résumé, they told him. Uh lacked a reputation as a chef. He needed to prove himself.

He and Kim decided to open a small place with no outside investors, as a kind of testing ground. In Los Angeles, they found an old Thai noodle shop by a 7-Eleven on Santa Monica Boulevard, where the rent was about $2,000 a month.

Uh says he didn’t expect the restaurant to remain open for more than a year. He was overwhelmed by its success.

In 2017, he temporarily left Baroo to apprentice himself to Jeong Kwan, a Zen Buddhist nun and a chef at the Baekyangsa temple in southwest South Korea, who specializes in Korean Buddhist temple cuisine. Some days, Uh would be in charge of cleaning all the old, traditional ceramics. Other days, he would dig vegetables in the garden, or scrub down the entire kitchen.

Uh stayed at the temple for seven months. Kim kept Baroo up and running, hiring two part-time cooks to cover for Uh.

Jeong Kwan greets everyone visiting her at the temple in the same way, Uh said. “Did you eat?” she asks them. If the answer is no, she offers them food. “That’s what I learned from her,” Uh said. “She spreads her spirit, soul and philosophy through cooking and food.”

During his stay at the temple, Uh met Mina Park, a chef and writer. The two plan to open a new restaurant with more seats and more staff than Baroo, building a more sustainable business model from the start. They are considering Los Angeles, where Uh feels a connection to Baroo’s diners, but also South Korea.

“It’ll take time," Park said. “We need to find funding, figure out the location, and we’re still talking about a few different concepts.” Eventually, she and Uh want to expand with a small farm where diners can stay the night, not unlike at the temple where they met.