Barber to meet with Pope Francis 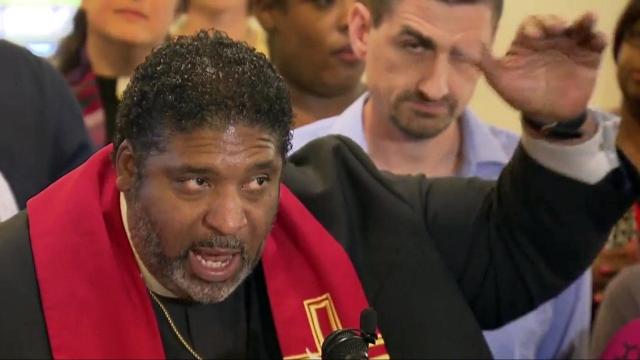 Raleigh, N.C. — Former state NAACP leader Rev. William Barber will meet with Pope Francis at the Vatican on Thanksgiving Day as part of two-day conference of social justice advocates from around the world.

Barber, the president of Repairers of the Breach, a nonpartisan, nonprofit social advocacy group, was invited to the Vatican in September, and he also plans to visit England and Africa to meet with labor and workers’ rights advocates.

Pope Francis has been an outspoken advocate for the poor, and he said a Mass for them on Sunday, denouncing those who ignore poverty by defining indifference to the needy as a "great sin."

The two-day conference will include social justice advocates from the U.S., Canada, Brazil, Ireland, Italy, Senegal, Tunisia, Ghana and other countries.

"This is an extremely humbling experience for me. I am deeply honored to even be invited to participate and share in this conference with other clergy, moral leaders and activists on these critical social issues of our time," Barber said in an email. "The Pope has been on the forefront of declaring that poverty in our current world is a scandal and its eradication should be a top priority. He has called on government and moral leaders to adjust our policies to address the issues of systemic poverty."

Barber stepped down this fall after 12 years as the NAACP's president in North Carolina. Under his leadership, the chapter grew into the largest in the South and the second largest in the country.

Repairers of the Breach has launched what Barber calls a Poor People's Campaign to reignite the campaign Martin Luther King Jr. started before his death in 1968. The group seeks a moral revolution in politics based on the teachings of the New Testament to care for the "least of these," Barber has said.