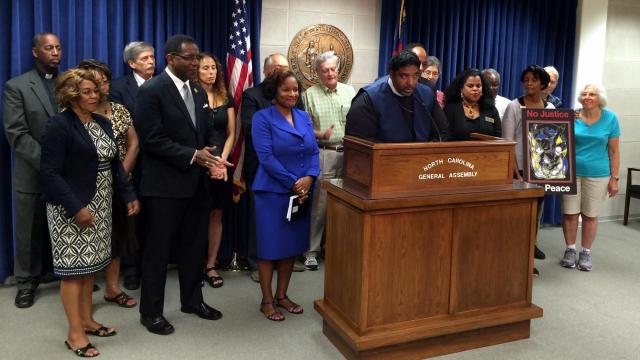 Raleigh, N.C. — Protests in the style of North Carolina's "Moral Monday" movement may reach Washington, D.C., next month as part of the national NAACP's Journey for Justice walk from Selma, Ala., to Washington.

"Our votes and our lives, our schools and our jobs matter," said the Rev. William Barber, president of the North Carolina Conference of the NAACP and the leader of the Moral Monday protests that have focused on the state legislature. "This is direction action through Southern states."

North Carolina's phase of the journey, Barber said during a Tuesday news conference at the North Carolina Legislative Building, will focus on voting rights. The NAACP is a plaintiff in a federal lawsuit challenging recent changes to state voting laws, such as shortening the period for early voting and eliminating same-day registration.

"It is a journey to call for the Congress to cease its more than two year non-action and political filibuster on fixing Section 4 and Section 5 of the Voting Rights Act," Barber said.

Although parts of the 1965 law are still in effect, parts of the law singling out areas with a history of racial restrictions on voting for special review were struck down by the U.S. Supreme Court as relying on information that was too old.

"This journey will end in D.C., where there will be massive advocacy and lobbying," Barber said. "We are in conversation, I've been talking along with others, with clergy nationwide, about Moral Monday-type action in the halls of Congress, especially around the denial of Congress to fix the Voting Rights Act."

Moral Monday protests at the General Assembly have led to hundreds of arrests and citations over the past four years, as protestors have sat in offices of key legislative officials, held rallies in the courtyards outside legislative chambers and otherwise practiced civil disobedience in the halls of the General Assembly. Most of the charges against the protesters were later dismissed.