Barbara Bush was an expert at throwing shade, even before the term existed.

When Congressman Dan Rostenkowski gave the first lady a shampoo for white hair made in his Illinois district, she tried it on her dog Millie.

“When I shampooed her with it, she became a brown and slightly yellow-haired dog,” she wrote in her memoir. “At this writing, Danny is under fire, accused of financial wrongdoing. We certainly wish him well.”

She took her revenge, chilled, on Nancy Reagan, who never invited the Bushes to the White House residence for dinner in the eight years H.W. was vice president and who instructed Barbara Bush to stay away from wearing “Nancy red” while she was the second lady. Writing about Nancy and Raisa Gorbachev competing at a wives’ lunch, Bush said she wasn’t sure of Raisa’s age: “I don’t know how old, but I think the paper said 53 or 55. That’s funny, for we really don’t know if Nancy Reagan is 65 or 67 and she won’t tell.”

She could be caustic, practicing radical candor. She told reporters at Kennebunkport once when I was there that she did not want W. to run for governor of Texas while his father was president. But when he dived into politics, she turned over one of the most valuable documents in fundraising history: the Bush family Christmas card list. 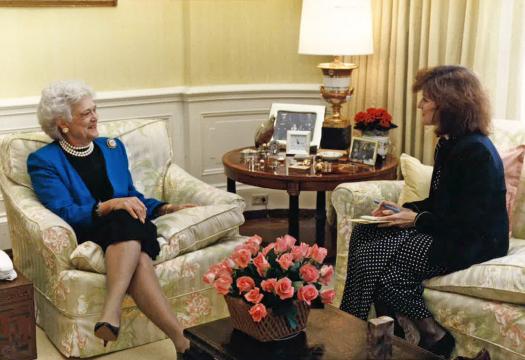 Even before the reality TV star her husband labeled an “ass” got in the race, Barbara Bush nailed the anti-elitist mood. In 2013, she acknowledged, in essence, that W. had worn out the family’s welcome. (The senior Bushes were privately distraught that W. let Dick Cheney, Donald Rumsfeld and the neocons hijack his presidency.)

“There are other people out there that are very qualified,” she said, “and we’ve had enough Bushes.”

But when Jeb jumped in anyhow, she dutifully went on the trail at 90 to try to buoy his lame effort — even though the “ass” tweeted that Jeb “desperately needed mommy to help him.”

She was the ungainly, insecure daughter of an austere, beautiful mother who put her down. From the time she and Poppy met, when she was 16 and he was 17, she loved him wildly. She went into a depression when he was “head spook,” as he called it, at the CIA and she was less involved in his world.

Once at Kennebunkport, when President Bush told reporters that he didn’t want to play golf with his wife because her game “stunk,” I could see her wince. She said she was happy when he was no longer president, surrounded by a coterie of male advisers, because “I am the only one who will play at 6 a.m. with 10 minutes’ notice!”

She never lost the torch. Once when we were at Kennebunkport, my fit friend Rita Beamish, the White House reporter for the AP, taught the president the proper way to do situps. When word got back to Bar, she was not amused.

Certainly, Poppy cherished his Silver Fox. He once wrote me a long parody of my columns about W. as a Boy King, in which he cast himself as “the Old King” and Bar as the “straight-talking Queen” and “Queen Barbara, his own bride of 56 years.”

Her hair had turned prematurely white when her 3-year-old daughter Robin died of leukemia, and she stopped coloring it in 1970, when a rinse called Fabulous Fawn began dripping in the heat, turning her neck brown. During her husband’s 1980 run for the White House, her sister-in-law told her the family was asking, “What are we going to do about Bar?”

“They discussed how to make me look snappier — color my hair, change my style of dressing, and, I suspect, get me to lose some weight,” she wrote in her memoir. “I know it was meant to be helpful, but I wept quietly alone until George told me that was absolutely crazy.”

In a moment that still makes me cringe, comedian Sinbad turned to Barbara Bush on the dais at a White House Correspondents Dinner and said she looked like a grandmother, compared with her boyish husband.

She didn’t flinch. The Silver Fox outfoxed them all by creating an appealing, authentic persona, dubbed “Greenwich granite” by Peggy Noonan. The patrician in the fake pearls wore $29 shoes that pinched at her husband’s inauguration. She made a point, after the deafening silence of the Reagan years on AIDS, to go hug babies with AIDS.

After the Bushes left the White House, I occasionally sent books to the champion of literacy. Some she loved — “Girl With a Pearl Earring” and “The Dressmaker of Khair Khana” — and some she wasn’t so sure about.

“A very belated thank you for the strangest book I have ever read, M Train,” she wrote in 2016 on a notecard engraved with W.'s paintings of her two dogs. “Interesting lady is Patti Smith!”

She added, “This is a strange year and very little surprises me anymore!”

Bush was always “lovely” to me, to use one of her favorite words. I wrote a piece in The New York Times about my mom when she died in 2005. I got an email from Bush, who did not have such a nurturing mother: “Maureen, we loved the words about your lovely mother. She was certainly not only fine, but a great beauty. You should be comforted that you look exactly like her and will when you are 100. Lucky girl to have had her. Sincerely, Barbara Bush.”

Bush had a bourbon just before she died. So did my mom, with a morphine chaser.

Bar knew 10 ways to throw shade, but she knew 100 ways to shine light.