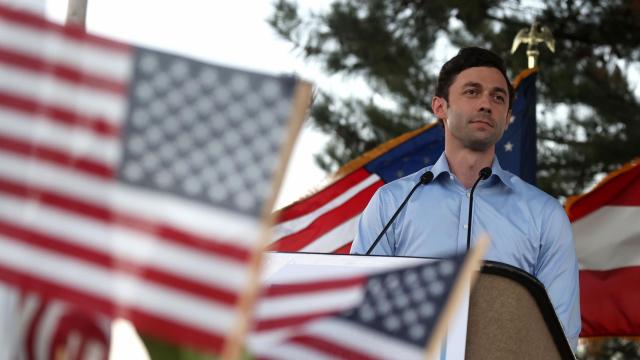 CNN — Former President Barack Obama is prominently featured in a new television ad for Georgia Democratic Senate candidate Jon Ossoff, pitching him as an injustice-fighting crusader who will pass a new Voting Rights Act and "listen to the experts" in combating the coronavirus pandemic.

The ad is a clear appeal to motivate Black voters, a crucial voting bloc in Georgia which dropped off in a 2008 Senate runoff race once Obama was off the ballot. The ad shows footage of Obama at a November 2 rally in Atlanta, where the former President noted that Ossoff "learned about public service from one of my lifelong heroes," the late Georgia Congressman and civil rights icon John Lewis, who hired Ossoff as an intern.

"If we vote like our lives depend on it, because they do, we will elect Jon Osoff to the United States Senate," says Obama.

It will begin airing on Tuesday, going into rotation as part of the campaign's seven-figure weekly ad buy, according to an Ossoff spokesman.

Ossoff and Rev. Raphael Warnock are campaigning to oust Georgia Republican Sens. David Perdue and Kelly Loeffler on January 5 in attempt to not only flip the seats but the Republican-controlled Senate.

Perdue, a first term-senator and former CEO of Reebok and Dollar General, has called his Democratic opponent a socialist, even though Ossoff is not, and claimed that the Republican senators need to win to "save America."

Perdue's latest television ad defends himself from Ossoff attacks that the senator is a "crook" for his multimillion-dollar stock trades during the pandemic, which drew the attention of the Justice Department and the Securities and Exchange Commission. The Justice Department did not pursue charges. The ad's narrator, echoing a statement from the senator's office, asserts that Perdue was "cleared" by the DOJ, SEC and the Senate Ethics committee.