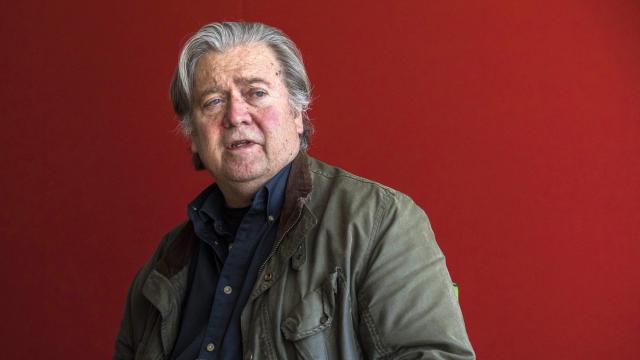 WASHINGTON — President Donald Trump’s supporters moved aggressively on Sunday to counter revelations in a new book that some of his closest aides believe he is unstable and ill-equipped for office, an assault that prompted the source of some of the most damning accusations, Stephen K. Bannon, to issue a striking mea culpa.

The multipronged attack, punctuated by a heated appearance on a Sunday talk show by a top White House adviser who was once a close ally of Bannon, was a sign of how the White House has been reeling from the allegations.

The adviser, Stephen Miller, who had been aligned with Bannon in pushing the president’s nationalist agenda, derided him Sunday as a fame-seeking blowhard and the book, “Fire and Fury: Inside the Trump White House,” by Michael Wolff, as a work of fiction.

Soon after came a rare and lengthy statement of repentance from Bannon, who over the last week found himself isolated from his political allies and cut off from his financial patrons. Speaking out five days after he was quoted harshly criticizing the president and his eldest son, a delay he said he regretted, Bannon tried to reverse his statements completely, calling Donald Trump Jr. “both a patriot and a good man.”

He is quoted in the book as calling the younger Trump’s meeting with Russians in 2016 “treasonous.” But in the statement Sunday, first reported by Axios, he said his reference to “treason” had been aimed not at the president’s son, but at another campaign official who attended the Trump Tower meeting, Paul Manafort.

Bannon is not known for second-guessing himself and views apologies as signs of weakness. Nowhere in his statement Sunday did he actually say he was sorry. But the turn of events represented a stunning reversal of fortune for a man who once operated with such autonomy in the White House that, as chief strategist, he reported only to the president himself.

While the attack on Bannon may have prompted an unusual expression of contrition from him, the collective force of the attempts to defend the president also ensured that the questions about his mental fitness raised in the book will continue to command attention. This comes as Trump enters a critical period needing to pass legislation like a spending measure to keep the government open.

The president returned to the White House on Sunday from Camp David, where he had held meetings with Republican leaders in Congress, Cabinet officials and senior staff members to set priorities for the year. After an initial message on Twitter that focused on policy matters like border security, the opioid epidemic, infrastructure and the status of young unauthorized immigrants, Trump joined the offensive against the book and the media coverage of it.

“I’ve had to put up with the Fake News from the first day I announced that I would be running for President,” he wrote on Twitter. “Now I have to put up with a Fake Book, written by a totally discredited author.”

Bannon has been the target of derision by the president, who has labeled him “Sloppy Steve” and has said he played a far lesser role in Trump’s political rise than he has been given credit for. Even out of favor, Bannon has said he remains a champion of the president’s agenda.

But Miller, the president’s senior policy adviser, acidly criticized Bannon in an interview on CNN, calling his comments in the book “out of touch with reality,” “vindictive” and “grotesque.”

In a week that held one indignity after another for Bannon, who has fancied himself a revolutionary poised to tear down the Republican establishment, the words of Miller may have cut the deepest.

Miller became a Bannon protégé of sorts during the time Miller worked for Attorney General Jeff Sessions when Sessions was in the Senate. He became one of the leading voices on the right calling for tighter controls on legal and illegal immigration.

The two men shared not just a nationalist-tinged conservative view on policy but a desire for political provocation. Bannon and Trump were delighted by and cheered on some of Miller’s more infamous and combative episodes with the media, like when he chastised a CNN reporter for displaying “cosmopolitan bias” in his understanding of the White House’s immigration positions.

Miller, however, bristled at the suggestion that he was a Bannon creation, a perception Bannon himself often encouraged.

Bannon’s allies understood the White House’s moves this past week to be an act of ruthless political war much like Bannon himself might have waged during his time in the administration. They said they believed that the president and senior aides like Kellyanne Conway, who is close to Rebekah Mercer, the billionaire who issued a rare statement last week disavowing Bannon, were sending activists and donors a clear message: He is persona non grata in conservative politics. Mercer is a partial owner of Breitbart News, the hard-right website where Bannon is executive chairman but where his future is now in doubt.

On Sunday, it was Miller who had the political leverage. He cast as false the perception that Bannon had ever played a Svengali-like role in the presidential campaign and the White House.

He said Bannon’s role had been “greatly exaggerated,” even as CNN host Jake Tapper ticked off a long list of policies he said Bannon had played a key role in formulating.

In “Fire and Fury,” Bannon said Trump had “lost his stuff,” and Miller also tried on Sunday to counter the concerns about the president’s mental state. Echoing the president’s own words from Saturday, he called Trump a “political genius” who could rattle off complete paragraphs on the fly in response to news events and then deliver them “flawlessly” to a campaign audience.

The interview, on the program “State of the Union,” quickly grew heated as Tapper accused Miller of being “obsequious” and speaking to an “audience of one.” Before it ended, Tapper told Miller that he was wasting his audience’s time. Tapper then turned to the camera, even as Miller was still speaking, and cut to a commercial.

A short time later, the president praised his aide on Twitter, saying that Miller had “destroyed” Tapper in the interview.

“Jake Tapper of Fake News CNN just got destroyed in his interview with Stephen Miller of the Trump Administration,” Trump wrote on Twitter. “Watch the hatred and unfairness of this CNN flunky!”

In addition to assailing Bannon, Miller sharply criticized Wolff and his book, saying it “is best understood as a work of very poorly written fiction.”

Wolff, appearing on NBC’s “Meet the Press,” stood by the accuracy of his book and contradicted the White House account of how often he had talked to the president.

He said that Trump had even initially flattered him about the project, and that he had told interview subjects that “the president said he likes this idea” of a book.

Wolff also repeated an assertion in the book that many in the White House had talked about the possible invocation of the 25th Amendment, a constitutional provision that permits a president’s powers to be transferred to the vice president when the vice president and a majority of the Cabinet or a body created by Congress conclude that the president is incapable of performing his duties.

“This is alarming in every way,” Wolff said, adding, “This is worse than everybody thought.”

Appearing on Sunday talk shows, others in Trump’s inner circle dismissed any such worries.

Mike Pompeo, the CIA director, said that he had no concerns about Trump’s ability to receive and process the kind of intelligence typically presented to presidents, and that Wolff’s descriptions of Trump’s mental state were “pure fantasy.”

“I’m with him almost every day,” Pompeo said on “Fox News Sunday.” “We talk about some of the most serious matters facing America and the world, complex issues. The president is engaged. He understands the complexity. He asks really difficult questions of our team at CIA.” Sen. Lindsey Graham, R-S.C., who was briefly a rival to Trump for the Republican nomination and, until recently, had been a frequent critic of the president, joined his defenders Sunday.

“I’ve enjoyed his company,” he said on “Meet the Press.” “He beat me like a dog. I’ve said everything I know to say about him — I’ve used every adjective on the planet. I lost. He won.”

“I don’t think he’s crazy,” Graham continued. “I think he’s had a very successful 2017. And I want to help him where I can. And we should all want him to be successful. He’s got a lot on his plate.”

With Republican control of the House and possibly the Senate at risk in 2018, Trump cannot afford another year dominated by news of West Wing dysfunction.

“The reality is people want the president to deliver, and this is a side show,” said Sam Nunberg, a former aide to the Trump campaign who is now close with Bannon.

Nunberg added that the president’s disavowals of his former strategist would mean little to voters. “The irony is the president is going to have a rude awakening when numerous candidates during the midterms respectfully decline his offer to campaign with them,” he said.