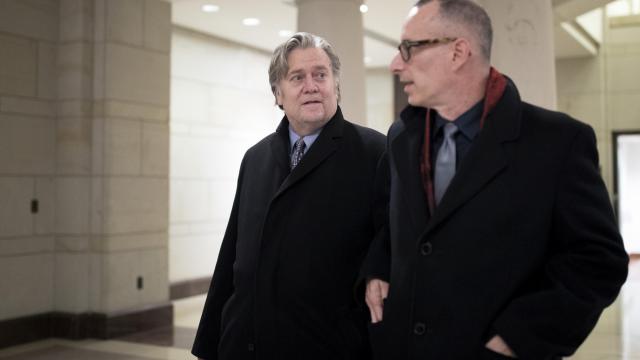 WASHINGTON — Stephen Bannon, President Donald Trump’s former chief strategist, was subpoenaed last week by special counsel Robert Mueller to testify before a grand jury as part of the investigation into possible links between Trump’s associates and Russia, according to a person with direct knowledge of the matter.

The move marked the first time Mueller is known to have used a grand jury subpoena to seek information from a member of Trump’s inner circle. The special counsel’s office has used subpoenas before to seek information on Trump’s associates and their possible ties to Russia or other foreign governments.

A second subpoena for Bannon to testify came from a House panel on Tuesday.

The Mueller subpoena could be a negotiating tactic. Mueller is likely to allow Bannon to forgo the grand jury appearance if he agrees to instead be questioned by investigators in the less formal setting of the special counsel’s offices about ties between Trump’s associates and Russia and about the president’s conduct in office, according to the person, who would not be named discussing the case. But it was not clear why Mueller treated Bannon differently from the dozen administration officials who were interviewed in the final months of last year and were never served with a subpoena.

The subpoena is a sign that Bannon is not personally the focus of the inquiry. Justice Department rules allow prosecutors to subpoena the targets of investigations only in rare circumstances.

On Tuesday, Bannon was questioned for 10 hours behind closed doors before the House Intelligence Committee, which is also conducting a Russian election meddling investigation. The meeting turned contentious as Bannon repeatedly said he could not answer questions, citing executive privilege. The committee eventually subpoenaed Bannon to compel him to provide answers.

After the interview, Democrats on the committee accused the White House of exerting influence over Bannon to keep him from expounding about his time in the West Wing. A senior administration official insisted that the White House had not told Bannon to exert executive privilege. Bannon did not address reporters, and a spokesman for Mueller did not respond to messages seeking comment.

Mueller issued the subpoena after Bannon was quoted in a new book criticizing Trump, saying that Donald Trump Jr.'s 2016 meeting with Russians was “treasonous” and predicting that the special counsel investigation would ultimately center on money laundering.

After excerpts from the book, “Fire and Fury: Inside the Trump White House,” were published this month, Trump derided Bannon publicly and threatened to sue him for defamation. Bannon was soon ousted as the executive chairman of the hard-right website Breitbart News.

Some legal experts said the subpoena could be a sign that the investigation was intensifying, while others said it may simply have been a negotiating tactic to persuade Bannon to cooperate with the investigation. The experts also said it could be a signal to Bannon, who has tried to publicly patch up his falling-out with the president, that despite Trump’s legal threats, Bannon must be completely forthcoming with investigators.

Prosecutors generally prefer to interview witnesses before a grand jury when they believe they have information that the witnesses do not know or when they think they might catch the witnesses in a lie. It is much easier for a witness to stop the questioning or sidestep questions in an interview than during grand jury testimony, which is transcribed, and witnesses are required to answer every question.

“By forcing someone to testify through a subpoena, you are providing the witness with cover because they can say, ‘I had no choice — I had to go in and testify about everything I knew,'” said Solomon L. Wisenberg, a prosecutor for the independent counsel that investigated Bill Clinton when he was president.

Significant grand jury activity may undermine the case that White House officials have made for months: that they believe the inquiry is coming to an end and are convinced that the president will be cleared. Mueller has told Trump’s lawyers that he will probably want to question the president before the investigation concludes, but no interview has been scheduled.

Bannon has limited firsthand knowledge about two key issues within Mueller’s purview — the president’s firing of James Comey as FBI director, a decision made without Bannon present, and the drafting of a misleading statement about the subject of the June 2016 meeting with Russians, in which they promised damaging information about Hillary Clinton.

But even Bannon’s secondhand knowledge could be used to draw a contrast with statements from people with firsthand knowledge whom Mueller has already interviewed. And Bannon was directly involved in a number of other major moments, including the decision-making around the firing of Michael Flynn, the president’s first national security adviser, who was dismissed after he lied to Vice President Mike Pence about phone calls with the Russian ambassador during the presidential transition.

Bannon also helped run the transition after Chris Christie, now the former governor of New Jersey, was fired as head of that team. And Bannon was the chief executive of the Trump campaign in October 2016 when WikiLeaks began releasing thousands of stolen personal emails from the hacked account of Clinton’s campaign chairman, John Podesta. In “Fire and Fury,” Bannon was quoted by the author, Michael Wolff, as suggesting that Donald Trump Jr.; the president’s son-in-law and senior adviser, Jared Kushner; and Paul Manafort, his campaign chairman at the time, were “treasonous” and “unpatriotic” for attending the meeting with Russians at Trump Tower. Bannon said that he believed there was “zero” chance that the younger Trump did not take them to meet his father, who has said he knew nothing about the meeting.

“The three senior guys in the campaign thought it was a good idea to meet with a foreign government inside Trump Tower in the conference room on the 25th floor — with no lawyers,” Bannon said in the book.

Trump erupted in anger after the excerpts were published, calling Bannon “Sloppy Steve” on Twitter and saying he had “cried when he got fired and begged for his job.”

“Now Sloppy Steve has been dumped like a dog by almost everyone,” Trump wrote. “Too bad!”

Days after the excerpts were published, a statement was issued in Bannon’s name in which he tried to back away from his assertions in the book. He said that his reference to treason was aimed at Manafort, not the president’s son. Bannon did not apologize, however, and though he had approved the statement, an associate sent it to reporters without his knowledge.

The president appeared to ease his anger toward Bannon at the end of last week. When asked in an interview with The Wall Street Journal whether his break with Bannon was “permanent,” the president replied, “I don’t know what the word ‘permanent’ means.”

People close to Bannon took the president’s comments as a signal that Trump was aware that his fired strategist would soon be contacted by investigators.

Trump has a history of reaching out to people he has fired, including those under investigation, directly or indirectly, as he did with Flynn after he was dismissed and before he struck a plea deal with Mueller’s investigators.

Bannon has hired William A. Burck of the Washington office of the Quinn Emanuel Urquhart & Sullivan law firm to represent him in the defamation threats from Trump and the congressional inquiries. Burck also represents several current and former administration officials who have been interviewed as witnesses by Mueller’s investigators. Among them are the White House counsel, Donald F. McGahn II, and the former White House chief of staff, Reince Priebus.