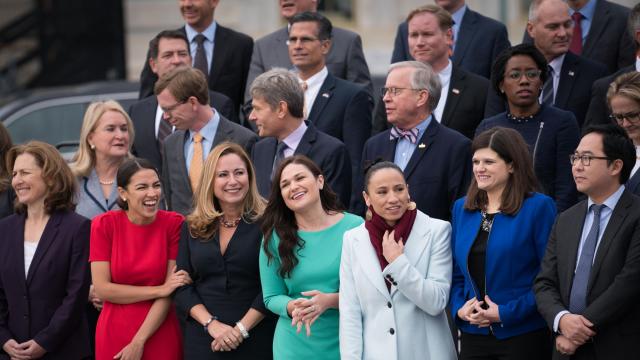 It is the year of the woman, all right. But only for Democrats.

But that is not all: From Congress to governor to state legislatures, far more Democratic women ran in this cycle than Republican women. And that means fewer Republican women on the bench, gathering experience and credentials to move up to the next level.

As the incoming freshman class of the 116th Congress gathers in Washington this week for orientation, the only Republican woman attending was Carol Miller of West Virginia (she could be joined by a few others whose races are still too close to call).

“I know that we need to up our game on the Republican end,” said Kelly Ayotte, the former Republican senator from New Hampshire who is on the board of Winning for Women, which was founded last year to encourage and finance Republican women to run for office.

Ayotte cautioned that one election cycle — particularly a midterm election when the party out of power typically makes gains and many Republican women were reluctant to run in what looked like a Democratic year — should not be seen as a trend. But political scientists who track women in public office note a longstanding disparity between the number of Democratic and Republican women at the federal and statewide levels.

“There’s been a Republican woman problem for a while — it didn’t start this year,” said Kelly Dittmar, a political scientist at the Center for American Women and Politics. “But it is illuminated by the fact that when you drop by one, two, three or four, you’re getting down to such a small level of representation for women because you had no padding.”

In Congress, the last drop in the number of Republican women was after the 2012 elections, between the 112th and 113th Congress, when it fell from 29 to 23.

Less attention has been paid to state legislatures, which are particularly important to increasing the number of women in office because they have been traditional steppingstones and training grounds. Currently, about 61 percent of women in state legislatures are Democrats and about 38 percent are Republicans.

That gap increased in preliminary results from this year’s elections, to about 68 percent Democrats and 32 percent Republicans, according to Katie Fischer Ziegler of the National Conference of State Legislatures.

That discrepancy is striking because Republicans dominate the majority of statehouses. But that may have reduced opportunities for women to run, she said, because so many Republican incumbents are male and would have to be challenged in primaries. Elaine Bowers, a Kansas state senator who serves as president of the legislative conference’s women’s network, said she was first tapped to run by a retired male state senator in 2006, and then moved from the Kansas House to the Senate, where she is now the majority whip.

“Women running for office isn’t always their idea,” she said. “I think that’s a shame. I said, ‘Am I qualified to do this?’ — and I was more than qualified to do it. How do we change that perception?”

“We are approaching a Democratic Party that looks like the people that make up the party base,” Holman said. “The Republican voting base is increasingly white, older and male. And the Republican candidates who won this time are those things.”

There is wide agreement on the causes, at all levels of government. Anger and shock at President Donald Trump’s election drove a record number of women on the left to run for office this cycle. Compared with years past, when women had to be actively recruited to run, many volunteered, including many without traditional political credentials. As Ayotte put it, dryly, “We now know that having prior political experience is not a prerequisite for getting elected to the highest political office in the land.”

Not only did new groups focused on reclaiming Congress for the midterms, such as Swing Left and Indivisible, spring up after 2016, women running for office could rely on a powerful network of established organizations, like Emily’s List and Emerge America, dedicated to recruiting, training and funding Democratic candidates. Republicans have no comparably longstanding and well-endowed groups.

“On the left, groups have recognized that women often have more hurdles to overcome on the road to political office,” said Kristen Soltis Anderson, a Republican pollster. “Democrats have, for decades, built infrastructure to support women candidates in overcoming those hurdles. Republicans have let the chips fall where they may.”

The firepower is lopsided. Emily’s List, which endorses and finances Democratic women who support abortion rights, said it raised $110 million this election cycle and has raised more than $600 million since it was founded in 1985. Value in Electing Women, one of the analogues for Republican women, has raised $4.5 million since it was founded in 1997, according to its website.

Value in Electing Women and other organizations dedicated to recruiting, training, or funding Republican women to run for office, such as Maggie’s List, did not respond to repeated requests for comment. Rep. Elise Stefanik of New York, who led the National Republican Congressional Committee’s efforts to recruit women for the House, declined a request for an interview.

Whitney Smith, who ran for state and county office as a Republican in Ohio and owns a consulting firm that specializes in female candidates, said she has worked on more than 300 campaigns. “I never, as a candidate or consultant, encountered a pipeline from the Republican Party to recruit women,” she said.

Ayotte and Anderson agree that Republicans need to match Democratic success in cultivating both major donors and grass-roots small donors. That is one reason Winning for Women is determined to build donor networks and has already signed up about 270,000 members in this cycle, said its executive director, Rebecca Schuller. Ayotte also wants to recruit women from a wider variety of backgrounds, including business, medicine and academics. There is another potential barrier for Republican women: In a party that shuns identity politics, there has been a reluctance to emphasize gender as a credential, Anderson said. According to exit polls of this election conducted by Edison Research, of the 45 percent of voters who said it was very important to elect more women to office, 82 percent were Democrats and 17 percent Republicans.

Ayotte said that she has no doubt the Republican Party welcomes more women, and was always encouraging of her candidacy, but that it needs to be more aggressive. “We should look to be representative of our country,” she said.

Anderson argued that, in the end, fielding more women is a shrewd electoral strategy. “Republicans who do care about the issue are going to have to show that it matters for winning elections,” she said. “And they will need to make the case that helping talented, highly qualified women get through primaries and into the general election is especially important for winning over more female swing voters.”