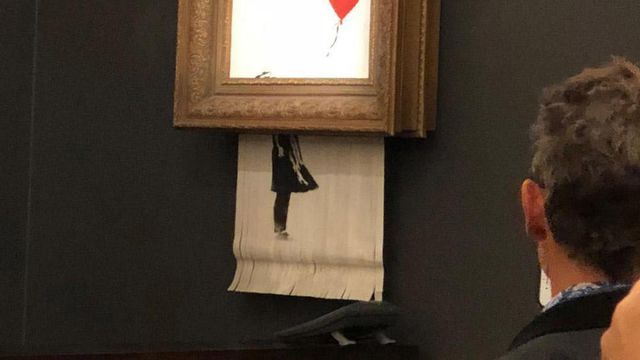 LONDON — British street artist Banksy pulled off one of his most spectacular pranks Friday night, when one of his trademark paintings appeared to self-destruct at Sotheby’s in London after selling for $1.4 million at auction.

The work, “Girl With Balloon,” a 2006 spray paint on canvas, was the last lot of Sotheby’s “Frieze Week” evening contemporary art sale. After competition between two telephone bidders, it was hammered down by auctioneer Oliver Barker for 1 million pounds, more than three times the estimate and a new auction high for a work solely by the artist, according to Sotheby’s.

“Then we heard an alarm go off,” Morgan Long, head of art investment at the London-based advisory firm Fine Art Group, who was sitting in the front row of the room, said in an interview Saturday. “Everyone turned round, and the picture had slipped through its frame.”

The painting, mounted on a wall close to a row of Sotheby’s staff members, had been shredded, or at least partially shredded, by a remote-control mechanism on the back of the frame.

A photo posted on the private Instagram account of Caroline Lang, chairman of Sotheby’s Switzerland, showed a man in the salesroom operating an electronic device hidden inside a bag. Long said she later saw a man being removed from the building by Sotheby’s security staff.

“I’ll be quite honest,” Branczik continued, “we have not experienced this situation in the past, where a painting is spontaneously shredded upon achieving a record for the artist.”

Branczik added that he was “not in on the ruse.”

Sotheby’s has not named the client whose $1.4 million purchase was destroyed. International auction houses do not divulge the identities of their buyers unless the person requests it.

But Sotheby’s said in a statement Saturday: “The successful bidder was a private collector, bidding through a Sotheby’s staff member on the phone. We are currently in discussions about next steps.”

Joanna Brooks, director of JBPR, who answers media enquiries on behalf of Banksy, declined to comment on whether the artist himself had been removed from the salesroom.

On Saturday afternoon Banksy posted a video on his Instagram account, recording the confusion at Sotheby’s auction, following a sequence purporting to show the artist hiding a shredder inside a gilt-wood picture frame.

“A few years ago I secretly built a shredder into a painting,” Banksy wrote in the video. “In case it was ever put up for auction.” By Saturday afternoon, the video had attracted nearly 2 million views.

Sotheby’s did not divulge the identity of the seller. According to the catalog, “Girl With Balloon” had been “acquired directly from the artist by the present owner in 2006.”

But suspicious minds wondered whether Sotheby’s was completely taken by surprise.

The frame would presumably have been rather heavy and thick for its size, something an auction house specialist or art handler might have noticed. Detailed condition reports are routinely requested by the would-be buyers of high-value artworks. Unusually, this relatively small Banksy had been hung on a wall, rather than placed by porters on a podium for the moment of sale. And the artwork was also the last lot in the auction.

“If it had been offered earlier in the sale, it would have caused disruption and sellers would have complained about that,” Long said. “And Sotheby’s let a man with a bag into the building. They must have known.”

For more than a decade, Banksy has created headlines with his daring, politically subversive artistic stunts. In 2005, the artist hung one of his “modified canvases,” showing a 19th-century beauty wearing a 20th-century gas mask, in the Metropolitan Museum of Art in New York for two hours.

The prank was one of several recorded in his best-selling book “Wall and Piece.” The following year, he left an inflatable doll dressed as a Guantánamo Bay prisoner in Disneyland.

The identity of the artist remains a secret. In 2008, the newspaper The Mail on Sunday suggested that Banksy was in fact Robin Gunningham, who was born in Bristol in the west of England and dropped out of private school at 16 to dabble in street art, a theory for which academic researchers have found corroboration. Banksy and the Gunningham family in Bristol have denied the connection.

As the artwork shredded itself, a seemingly unperturbed Barker, the auctioneer and Sotheby’s European chairman, said, “It’s a brilliant Banksy moment, this. You couldn’t make it up, could you?” It was an unexpected finale — at least to those in the room — to a $90 million auction in which “Propped,” a monumental 1992 canvas of a female nude by Scottish painter Jenny Saville, sold for 9.5 million pounds, or about $12.4 million, setting an auction high for an artwork by a living female artist.

Perhaps the shredded “Girl With Balloon” might eventually also prove a lucrative investment.

Banksy pronounced the painting “going, going, gone” on his Instagram account, quoting Picasso: “The urge to destroy is also a creative urge.” (The quote is often attributed to Picasso, but also to Mikhail Bakunin, the Russian anarchist who died five years before Picasso was born.)

But the painting was neatly shredded and could easily be backed on another canvas by a competent conservator. Thanks to the publicity of this stunt, could the painting now be even more desirable as a piece of auction history?