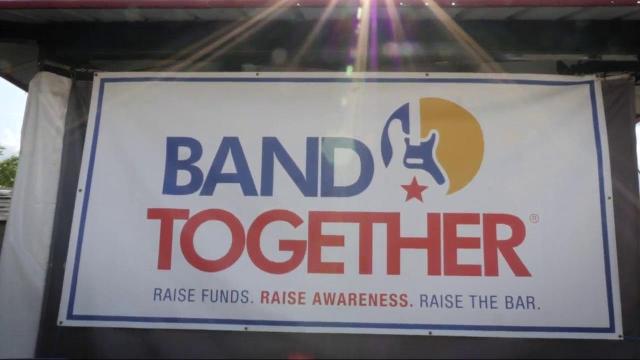 Raleigh, N.C. — Band Together and the United Way of the Greater Triangle are teaming up to host a concert fundraiser in October.

The concert is planned to be in-person on Oct. 23 at Red Hat Amphitheater, pending any health and safety guidelines in place.

If COVID-19 concerns remain in October, Band Together organizers say they plan to work with the headlining band to find a new concert date in 2022.

The lineup for the show has not been announced. Tickets will go on sale in the coming months.

Band Together was founded in response to the terrorist attacks of Sept. 11, 2001. Throughout the years, the nonprofit has donated more than $10 million to its local nonprofit partners. The nonprofit is known for its annual fundraising concerts, which have included headliners like Ben Folds, Walk the Moon and St. Paul & the Broken Bones.

"There is such power in live music that it can not only bring people together but also help in the healing process. Band Together believes we're greater together and is thrilled to team up with United Way of the Greater Triangle to help in the recovery and rebuilding process of our beloved community," Band Together’s Executive Director Thorne Daubenspeck said. "There is light at the end of the tunnel. We look forward to working side by side with United Way to help raise money for many incredible Triangle nonprofits that serve our community."

In March 2020, United Way of the Greater Triangle launched its Rapid Response Fund to help provide residents with critical resources during the COVID-19 pandemic. The fund has distributed more than $1.4 million to 104 nonprofits.

“It’s going to take our entire community to recover and stabilize following this pandemic. We can’t think of a better way to engage all Triangle residents than through the power of music, and Band Together’s annual concert is the best one we know. We’re looking forward to seeing everyone there on October 23," United Way of the Greater Triangle’s President and CEO Eric Guckian said.

Band Together and the United Way teamed up to host the “Call For Change: Band Together Against Racism” telethon in partnership with WRAL, DPAC and Lincoln Theatre in August 2020. The event raised $200,800 to support local leaders of color and anti-racism, systems-level solutions to poverty through United Way’s Anti-Racism Community Fund.

Band Together raises more than $200,000 to fight racism during concert fundraiser
SUGGEST A CORRECTION