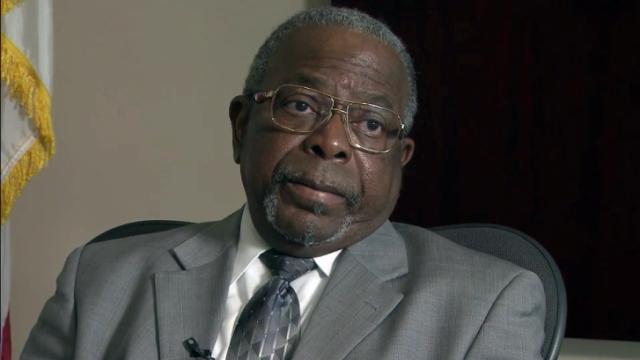 Brown, who was reinstated last month, said he couldn't speak publicly earlier about the suspension, which he calls the most traumatic episode of his decades in education, because he would have been fired.

"It's very difficult to sit knowing your reputation is being destroyed and you can’t defend yourself," he said in an exclusive interview with WRAL News.

Brown often recruits students to Shaw to play in the Platinum Sound Marching Band, and he said he felt obliged to call them this summer when he learned that Dubroy was shifting financial aid money around, cutting the $7,500 tuition discounts band members had received for years.

"I requested that I call, contact the students to inform them that their scholarships had been reduced, and she threatened that, if I did call them to tell them, that she would fire me," he said.

The two met July 13 in Dubroy's office to discuss the issue, and Brown secretly recorded the meeting.

"I'm telling you verbally do not communicate with any of the students," Dubroy says on the recording.

"You can't tell me to do that," Brown responds.

"Try me," Dubroy says, adding that any calls made to students by Brown "would be the quickest exit strategy for you to get out of this university."

"How do I explain to those kids that the money I promised them is not there?" he asked.

"You do not have to explain it. That's not your job," she replied.

Now, Brown says he didn't call anybody "in respect for her position," a move that he regrets.

Financial aid staffers informed students of the lost discounts for more than two weeks. The notice came only days before the start of the fall semester, prompting a protest on the steps of the administrative building.

"I thought it was very cruel and heartless of her to do that, considering these kids had been promised that money," Brown said, adding that he believes the university waited until the last minute – some students were already on campus for band camp – so students couldn't withdraw from Shaw and enroll someplace else.

"She showed no compassion for these students at all – and none for Shaw for that matter," he said.

Shaw officials issued a statement Wednesday blaming the delay in telling students about their financial aid on late or missing paperwork.

Dubroy tried to calm students at the protest by telling them that other support would replace the lost tuition discounts, and when one band member questioned her on Facebook about the late notice on the changes to financial aid, she responded by posting, "I will ask Mr. Brown and get an answer for you. I conveyed this imminent occurrence a month ago."

"That was a flagrant lie," Brown said. "She knew she had told me – threatened – that, if I told those students, she would fire me."

Four days after the protest, Brown was suspended for what the university called "behavior alleged to be inconsistent with the University’s policies and principles."

"That statement was very suggestive," he said. "When people hear things like that, the worst-case scenario comes in their minds. They think Mr. Brown has violated or made innuendo toward some of these girls. That has never happened.

"That was maliciously done to plant that seed, to destroy my reputation and credibility," he continued.

Both he and Shaw officials now say the investigation was related to a violation of Title IX, the federal gender-equity law.

"It was retaliatory," Brown said, "because the Title IX issue had no relevance to what occurred."

Shaw's statement said the suspension wasn't related to the band financial aid, but officials declined to address his accusations that Dubroy threatened to fire him if he contacted students about it.

After he was cleared of wrongdoing and reinstated, he said he considered not returning to Shaw but was persuaded to go back. But he said the damage to his family and his reputation can’t be undone.

Dubroy hasn't spoken to him since he returned to campus, he said, which angers him.

"I would like for her to give me a public apology and clean up the mess that she has created for me," he said. "She was quick to announce that I did something wrong, but once it was discovered that I didn’t, I was on my own."