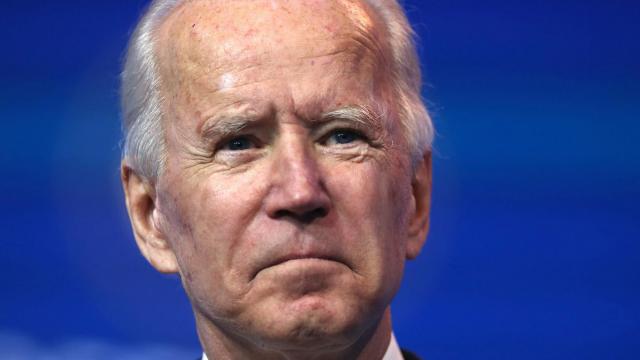 CNN — Elizabeth Warren's fingerprints are all over the Biden transition, much to Wall Street's dismay.

President-elect Joe Biden's agency review teams include several people who share Warren's reputation for being tough on the financial industry.

It's more evidence of the influence of Warren, a fierce opponent of big banks and the excesses of Wall Street -- as well as an early signal that Wall Street will be under much greater scrutiny, especially compared to four years of President Donald Trump's efforts to dismantle regulation and unshackle big banks.

"The big-bank CEOs who read that list are probably somewhat concerned," said Isaac Boltansky, director of policy research at Compass Point Research & Trading. "Progressives absolutely won the day on this."

Biden tapped about 500 people to work with government agencies, from the CIA to the United States Postal Service, and help shape the future of government policy and appointments.

'He made a lot of enemies'

Perhaps top on Wall Street's worry list is Gary Gensler, who will lead the team working with financial regulatory agencies including the Federal Reserve, SEC and FDIC. Gensler led the Commodity Futures Trading Commission from May 2009 to January 2014.

Among the Obama-era regulators, Gensler was the most aggressive in implementing the Dodd-Frank financial reform law that Wall Street opposed.

Although Gensler is a former Goldman Sachs banker, he is now viewed as a tough-on-Wall-Street ally of Warren.

"He made a lot of enemies in DC and the industry," said Ed Mills, Washington policy analyst at Raymond James. "The fact he's leading this is a signal to the Elizabeth Warren wing of the Democratic Party that they have a voice on financial regulatory picks."

Kelleher, who declined to comment, is not exactly from the Robert Rubin wing of the Democratic party. (Rubin, a former Goldman Sachs chairman, served as Treasury secretary under President Bill Clinton.)

Last month, Kelleher condemned Goldman Sachs as a "recidivist lawbreaker" that has "preyed upon and ripped off countless Main Street Americans and many others."

In a June interview with CNN Business, Kelleher slammed what he called the "predatory private equity business model" of firing workers and unloading pension obligations after leveraged buyouts.

"Once a private equity firm extracts the maximum amount of value, it then tries to flip it into the public markets so it can cash out on the near-carcass of a corporation," Kelleher said.

That reads like a jab from one of Warren's infamous bank CEO takedowns.

Meanwhile, Biden has a separate team overseeing the transition of the Consumer Financial Protection Bureau, the agency that is a Warren brainchild of Warren.

That team is being led by Leandra English, the CFPB's former deputy director. In 2017, English unsuccessfully tried to block Trump from installing as the agency's acting director Mick Mulvaney -- who once pushed to abolish the CFPB. While testifying as acting director, Mulvaney defended his tenure by saying, "I have not burned the place down."

"Leandra English has deep experience, not just on the issues, but on how the mechanics of the CFPB works," said Compass Point's Boltansky.

He noted that the Trump transition met some "bumps in the road" because the president tapped some people who didn't have much experience in government.

No major overhaul is coming

Of course, it's important to note that Biden has only named a transition team, not a full Cabinet. There is no guarantee his picks to lead major agencies will ultimately please Warren and the progressive wing of the party.

And even if Biden wanted to pick regulators who would be very tough on Wall Street, Republicans in the US Senate may have the votes to block those appointments. (Unless Democrats sweep the runoff races in Georgia, Republicans will retain control of the Senate.)

"Progressives are absolutely first on that invisible scoreboard between progressives and centrists," Boltansky said.

But Boltansky noted that "we're at a very different point in the evolution of financial regulation" than in 2009, when the Obama administration was taking over. Back then, during the Great Recession, it was clear that a major Wall Street overhaul was not just inevitable, but necessary. And it took years to implement the Dodd-Frank law of 2010.

Today, Wall Street is not viewed as the top priority, with the Biden administration likely to focus instead on the pandemic, inequality and the climate crisis. And the fact that banks have withstood the turmoil of the health crisis (so far at least) suggests Dodd-Frank worked to strengthen the system.

But that doesn't mean Biden-appointed regulators won't put a stop to practices they view as unfair. Analysts are warning the Biden administration could crack down on overdraft fees, the banking industry's $11 billion gravy train that critics say punish society's most vulnerable.

And Biden's regulators could take a much tougher stance on bad behavior like the laundry list of scandals at Wells Fargo.

"If you're a bank that has a scandal, then you need to be worried," said Mills, the Raymond James analyst.

It's no coincidence that Goldman Sachs, JPMorgan Chase and Citigroup all reached major settlements this fall with the Trump administration ahead of the change in power. Even former Wells Fargo CEO John Stumpf agreed to a personal $2.5 million penalty over his role in the fake-accounts scandal.

Still, Biden will be under pressure from progressives to take a tough stance on enforcement. Critics say the Obama administration adopted a too-big-to-jail mindset by failing to go after big banks and their top executives.

Yet like other Democrats, Biden will have to balance that urge to root out Wall Street wrongdoing with the need to keep capital flowing.

"They need the economy to work to get reelected," said Mills. "And you can't have the economy work if the banking sector isn't."