Back to School: Jumping into a new school with both feet 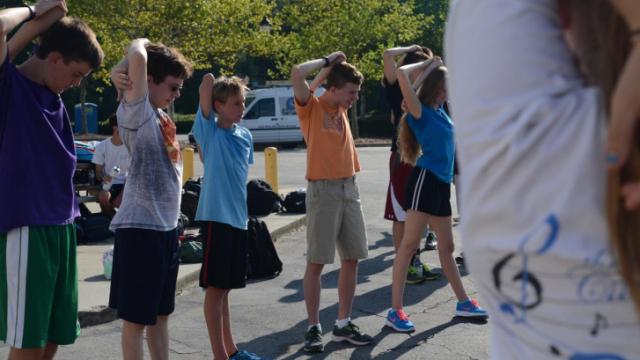 Editor's Note: As many of our kids head to new schools this year, Liisa Ogburn, a Raleigh mom of three, shares this as her son prepares for high school.

It was 5 o'clock traffic and Interstate 40 was already backed up. My son and I sat tensely watching the dashboard clock. Cross country try-outs at his new high school started soon and it was just dawning on me how much time I would be spending in the car this fall with three children in three different schools (elementary, middle and high school).

Rather than making light of it to loosen Aidan up, I silently started calculating all the new things I would need to navigate in the next few weeks. A new school, new teachers, new academic demands, procedures, carpool routes, peers ...

The traffic eased and my speedometer edged back up to 65 mph. We pulled into the parking lot of the new school with two minutes to spare. A knot of gangly teenagers loosely circled the two coaches. There was no time to be nervous. Aidan grabbed his water bottle and raced over to join them.

“We could use some parent help, if you’re able,” Coach Swepson called through my car window. I had not packed my running shoes, but had some Tevas in the back. I parked, put them on, tied my hair back and walked over. Among the 30 or so kids who had shown up, there was only one familiar face. I quickly surmised that, for most here, everyone was a new face. It was a relatively new charter school.

After some warm up sprints around the parking lot, the coaches divided the kids into two groups: Those who could run a fast three-mile out-and-back and those just starting to run. They would do a slow two-mile circuit. Aidan went out with the first group. I was assigned sweep-up for the second.

After all the kids had taken off, I brought up the rear, still lost in thought. But soon I fell in beside a chatty rising sophomore who was telling Coach Reid about her recent backpacking trip. I watched Coach Reid respond cheerfully, then speed up to catch another runner, and then after that, another one. It was hot. Almost everyone in my group wanted to stop and walk, but the coach cheerfully cajoled them into finishing strong.

My son’s group had hit their milestone and was now passing our group on their way back. Though he was about a foot shorter, he was smiling and chatting with one of the upper classman.

He and everyone in his group gave me a high five when they passed. That’s all I needed to pick up the pace. It’s a new year. He had jumped in with both feet and now it was my turn to do the same.

Aidan Colvin and his mother are currently completing a book called “Searching for Heroes,” a mother-son memoir about connecting with successful dyslexics. For more information, visit their website.