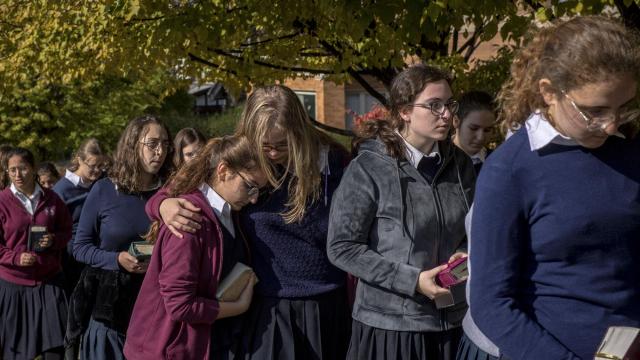 PITTSBURGH — Beth Markovic, an owner of the last kosher grocery store in Pittsburgh, was up to her elbows on Wednesday, making yet another order of sherry mushroom chicken. She has lost track, she said, of how many orders she has made since the devastating massacre here last weekend.

Most of those who were killed at the synagogue on Saturday had been customers at Murray Avenue Kosher at some point. Markovic’s store, which is less than a half mile from the Tree of Life synagogue, has been a longtime fixture in Pittsburgh, providing food for before and after funerals and for the seven-day shiva period in which mourners come together to comfort the bereaved after burial.

“We’re used to dealing with deaths and funerals, but never anything like this,” Markovic said. As for the ultimate reason for all the work, she said, in what has become a common sentiment: “I haven’t had time to let it all sink in.”

Yet grief is sinking in slowly across the city, as the public rituals of mourning accumulate day by day.

Four people eulogized and buried on Tuesday, three on Wednesday. Every day more solemn shovelfuls of dirt are poured into graves, and another shiva begins. By Saturday night, several of them will be taking place around the city, mostly in and around the neighborhood of Squirrel Hill. People will cry and laugh and swap memories over plates of sherry mushroom chicken.

Routinely these days, those who knew the victims, even only as acquaintances, break off midsentence, their voices cracking. There are frequent apologies for scattered trains of thought. It is all so exhausting — “You cannot begin to imagine how much stuff there is to do,” said Meryl Ainsman, the chairwoman of the Jewish Federation of Greater Pittsburgh — both physically and emotionally.

But while the endless demands can keep grief at bay, they do so only temporarily, and never completely.

The families who have yet to bury the dead remain in a painful period known in Jewish tradition as aninut, when mourners are not expected to do anything but focus on preparing for the funeral. It is an unusually long limbo for some in Pittsburgh right now; the typical practice of burial within a day or two has been made impossible by the criminal investigation and other factors.

“This waiting period, this is something that I am not used to,” said Lenny Silberman, 63, who has known Rose Mallinger, at 97 the oldest of the 11 victims, most of his life. Mallinger’s funeral is scheduled for Friday, the last of the funerals, delayed in part because Mallinger’s daughter is still in the hospital recovering: She was shot in the arm during Saturday’s attack.

“Usually you would have had the funeral by now, the conversation begins to change,” Silberman said. “The conversation hasn’t changed yet. She’s not buried. I don’t know how to talk about her yet.”

The first burials came on Tuesday but with them came another, seemingly impossible challenge: to hold a normal shiva for a death that is anything but normal. Typically, shiva takes place in someone’s house, with friends trickling in and out into a living room to eat and sit with families. That is not how it has been this week in Pittsburgh. “There’s no living room; we couldn’t possibly fit this into a living room,” said professor Carolyn Ban, a member of the Dor Hadash congregation. “These people were loved by so many people.”

She attended the funeral of her friend Jerry Rabinowitz on Tuesday, which took up so much room in the Jewish Community Center auditorium that people had to watch the service on a video feed in the gymnasium.

On Wednesday night, as children dressed as witches and superheroes walked by on the drizzly sidewalks outside, dozens gathered again at the center, for the second night of shiva for Rabinowitz. They listened as friends and family members read stories from the Talmud and the Torah, and talked about darkness and hope. The group said kaddish, the Jewish prayer for the dead, and broke up to eat, drink and remember.

Many of the gatherings are private and closed to those who are not friends or family, but friends or family is an enormous category. People from all over the country have offered to fly in to make shiva calls, eager to both comfort the mourners and process their own grief by being there.

On Tuesday night, hundreds of people packed the home where Daniel Stein, 71, lived for years with his wife, Sharyn. A line snaked out the door onto the porch and stayed about 50 people deep for hours. Plainclothes officers from the city Police Department and the FBI were scattered throughout to ensure safety and privacy.

When the rabbi began to lead the mourners’ kaddish, it was impossible to see just where the voice was coming from.

Sharyn Stein, said Steven Halle, a nephew, “sat in one chair at six o’clock and didn’t get up until 11, when people had gone home.” Grieving has become its own challenge. One member of Dor Hadash talked of missing the first night of Rabinowitz’s shiva because of concerns that the roads would be blocked off by huge protest marches for a presidential visit.

Services are held one after another or even at the same time, and shivas start every night. “You can only be so many places at one time,” Ainsman said.

On Wednesday the second funeral in two days was held at Rodef Shalom Temple, the line leading out the door.

“He wasn’t the tallest guy but he had the biggest heart,” said Marsha Mintz, a longtime friend of Irving Younger, who was 69. Mintz was a guest at the wedding of Younger and his late wife, Sherry, and remembered how he had doted on her. “She was ill for a very long time and he took care of her with such devotion,” Mintz said, choking back tears.

Earlier that morning was the service for Joyce Fienberg, 75, at Beth Shalom. Less than a mile away, and at the same time as Younger’s service, was the funeral for 87-year-old Melvin Wax, who was shot coming out of a dark storage room into the sanctuary where New Light congregation held services.

“It’s very all-consuming,” said Rabbi Jonathan Perlman of the New Light congregation, which lost three members in the attack. “Everybody is talking about whose funeral they have gone to and when the next funeral is going to be and where will it be held.”

But, he said, it is “in some ways very consoling because we are all together and we are hearing stories about how these people lived.”

The rabbi was now at home for the night, having finished leading the service for Stein. He had two more ahead of him.