Cary, N.C. — Even though a medical examiner ruled the death of a Cary infant an accident, the child's mother remains in jail on charges that she killed the 5-month-old boy.

Myechia Naomi Avery, 30, of Cary, was arrested Saturday on charges of child abuse and involuntary manslaughter.

According to arrest warrants, Avery woke up Sept. 18 to find her son, Benjamin, under a plastic laundry bag at her Cheswick Place apartment.

Cary police responded and found the child unresponsive. He was pronounced dead at a local hospital.

"It could not be determined whether the death occurred due to plastic obstructing his airways, from the weight of the bag on his body or a combination of these," the autopsy report states. "The manner of death is classified as accident."

Avery was suspected of drinking and doing drugs the night Benjamin died, according to search warrants.

The warrants state that, once Avery found Benjamin unresponsive, she asked a neighbor to call 911.

After her son's death, Avery posted on Facebook denying she had anything to do with his death, saying "People are saying I did this to you purposely, but no matter what happens my little bunchy, you know I would never hurt you." 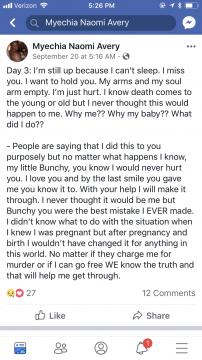 A judge appointed an attorney for Avery during her brief court hearing on Tuesday.