Clinton, N.C. — Sampson County authorities located a 10-year-old girl Tuesday evening who was the focus of a statewide Amber Alert.

Sampson County Sheriff Jimmy Thornton said the county Department of Social Services placed Breanne and her 8-year-old brother in their grandmother's custody a few days ago. Jonathan Lewis Jones, the children's father, went to the home outside Turkey on Monday night and took the girl, the sheriff said.

"The dad shows up last night, takes the daughter and leaves," Thornton said. "He has two children, a son and a daughter, but the daughter was the only one of the two that went with him."

Authorities didn't start investigating the case until Tuesday morning because there were some questions about who had legal guardianship of Breanne, he said. 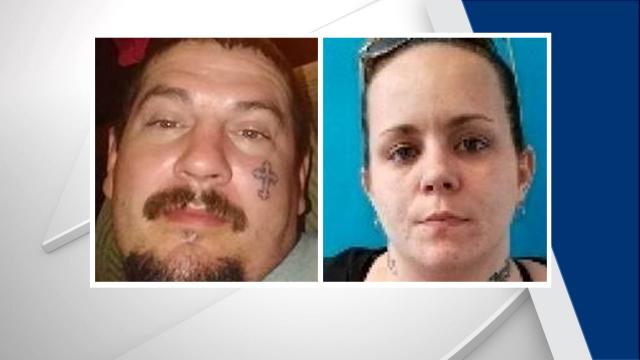 Jones, 38, and Christina Renee Edge, 32, were taken into custody.

The red 2004 Chevrolet Impala that authorities said Jones was using was found off N.C. Highway 403 outside Clinton at about 5 p.m. after someone called authorities about a suspicious vehicle. When deputies went to check on the vehicle, Thornton said, the people inside jumped out and ran off.

Matthew Joyner, who lives near where the three were found, said a man in a truck with a gun was chasing the red Chevrolet Impala and inside was the 10-year-old girl.

"When I seen that they had that little girl, I told my wife to call 911," said Joyner. "I seen the guy snatch that little girl out, and they start running through the woods."

Tracking dogs and drones were brought in to assist with the search, and Jones, Edge and the girl were found about 250 to 300 yards away in the woods, Thornton said.

"He was kind of mouthy," the sheriff said of Jones.

Jones was charged with injury to real property and misdemeanor child abuse and was being held in the Sampson County jail under $10,000 bond. Edge was charged with a probation violation. Authorities said more charges are possible in the case.

Jones has a criminal record dating to 2000, including convictions for breaking and entering, communicating threats, violating a protective order, resisting arrest, impaired driving and drug crimes, according to state Department of Public Safety records.