Audit: NC agency spent on cake bites instead of housing 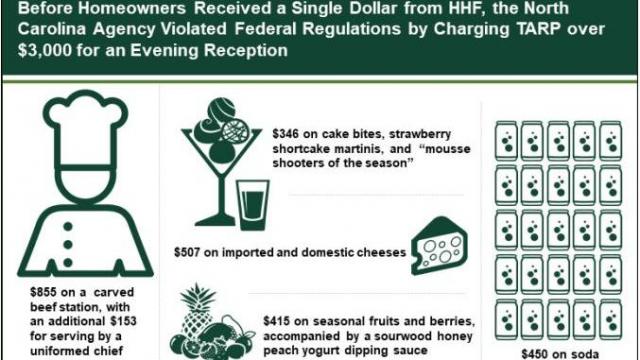 Raleigh, N.C. — A federal auditor said Thursday that the North Carolina Housing Finance Agency misspent nearly $130,000 from the government's Troubled Asset Relief Program that should have gone to help homeowners.

Among the problem spending: a 2010 conference for housing counselors.

"Before homeowners received a single dollar from (the program), housing counselors were treated to an evening reception featuring a carved beef station staffed by a uniformed chef, cake bites and strawberry shortcake martinis," the Office of the Special Inspector General for TARP said Thursday. "The North Carolina agency charged TARP $3,130. Later, a guest speaker lectured on 'Motivation by Chocolate' at a cost of TARP $2,500."

This is the second inspector general's report in two years to chastise the N.C. Housing Finance Agency and similar agencies in other states.

Agency spokeswoman Connie Helmlinger was traveling for a conference Thursday and said the agency wasn't given an advance copy of the report before its public release.

"We will need time to review the entire document and cross-check it against our own data," Helmlinger said in an email. "Once we have a chance to review the report, we will issue a statement."

The money came from the U.S. government's Hardest Hit Fund, which was meant to prevent foreclosures in the wake of the 2008 housing crisis. Nationwide, more than $1 billion was budgeted for state housing agency administrative expenses, the inspector general's office said.

The full report found $411,658 in prohibited travel and conference costs. The inspector general said state agencies across the country are expected to spend another $200 million in administrative expenses over the next two years.

"Any dollar wasted or spent inappropriately is one less dollar for homeowners or taxpayer savings," the organization said in a news release.

North Carolina's questioned spending amounted to $127,101 on travel and hosting conferences, the report states. It goes on to say auditors found "the same culture" criticized in a 2017 audit, which found $107,578 in "waste, abuse, and squandered TARP dollars."

The report notes that the TARP program was a massive funding boost for the N.C. Housing Finance Agency, whose broader mission is to finance affordable housing in the state. The agency got nearly $483 million from the Hardest Hit Fund, 38 times the grant funding the agency had previously received, the report states.