At the White House, Even the Holidays Are Met With Grievances 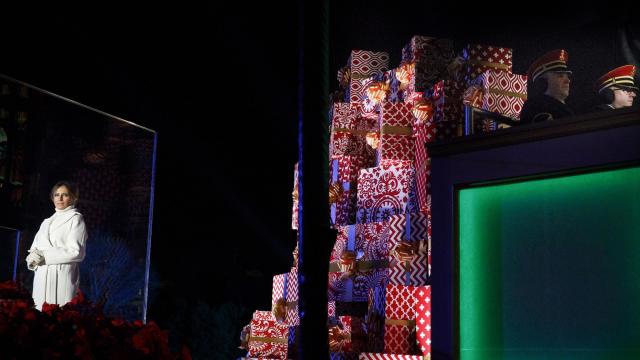 WASHINGTON — It’s been a chilly holiday season at the White House.

The weather is the least of it.

With President Donald Trump — who has spent much of the week defiantly defending his zero-tolerance immigration policies, angry over his coverage in the news media and insistent on the innocence of his incarcerated former campaign hands — it has been abundantly clear that not even the frothiest of White House holiday events would be carried off without an icy airing of Festivus-like grievances.

Not the unveiling of the first lady’s forest of (blood-red, it must be said) Christmas trees.

And perhaps especially not the annual holiday reception hosted by the White House for legions of Washington journalists. So far, administration officials have declined to say if this year’s event is even on.

Bill Shine, who leads communications at the White House, said he could not comment on the party’s fate, but he suggested that a certain special counsel could make the cut.

Indeed, by the time the president and first lady unveiled the National Christmas Tree on Wednesday, both of them had complained about their respective media coverage.

On Twitter and in interviews, Trump spent the day claiming that the United States was entering a new “Joseph McCarthy Era!” and denigrating the “disgusting Fake News” media over its coverage of the special counsel investigation.

And the first lady, Melania Trump, criticized the kinds of stories reporters focused on while defending her crimson White House tree decorations, which were widely accused of being creepy.

“They would like to portray different stories and focus on unimportant stories,” Melania Trump said of the news media while onstage at a summit Wednesday that was meant to focus on the opioid crisis. As for the trees: “I think they look fantastic.”

And so the Trumps soldier on, spreading cheer and fighting back against their critics as the animus between their administration and its chroniclers has once again spiked.

It was only two weeks ago, after all, that the White House was taken to court over a CNN reporter’s yanked press pass. And a week since the press secretary, Sarah Huckabee Sanders, issued new rules for reportorial comportment in the West Wing, including a sort of-but-not-really semiban on follow-up questions?

Was that all just a tryptophan-induced dream?

It seemed that way during a moment, at least, of comity Tuesday, when reporters and Sanders trudged into the James S. Brady Briefing Room for her first “daily” White House press briefing since October. The usual tussling ensued, no press passes were snatched and when Jim Acosta, the re-credentialed CNN correspondent, piped up with a question, Sanders politely replied.

Then came the moment of truth. “And,” Acosta intoned, milking his windup, “if I could ask a follow-up?”

He asked. She answered. The briefing went on.

The fate of the holiday party might be a better barometer of White House press relations. In the great Washington tradition of conflict by day, conviviality by night, presidents have traditionally welcomed their skeptics in the news media to the East Wing for an evening of holiday quaffs and sundries. Friends and family are invited. Receiving lines for photographs with the first couple once stretched for hours.

Like other Washington rituals, it has not quite survived Trump. Last year’s event was rescheduled to the afternoon — not exactly prime time for mulled wine — and a few news organizations, including CNN, boycotted. Trump said a few words, complimented Maria Bartiromo of Fox Business on her ratings, and then bolted.

There were no photographs.

Now the party, and its gallons of eggnog (boozy and virgin), may vanish entirely. White House officials repeatedly declined to confirm that this year’s edition will go forward, citing the continuing strain between Trump and his press corps.

That could be a gift to media critics who say such parties are a cozy, unseemly relic. But many Washington journalists are likely to view a cancellation as a not-so-subtle lump of coal. Even President Bill Clinton, around the height of his impeachment crisis, begrudgingly held one on the South Lawn.

Trump, for his part, is happy to rail against the news media with one hand and beckon them in with the other. He has granted extensive interviews to four major news organizations in the past three days, including an Oval Office sit-down with his hometown New York Post.

He also mused on Twitter about starting a state TV channel, saying the United States could start “our own Worldwide Network to show the World the way we really are, GREAT!”

As evening fell Wednesday, both Trumps briefly paused to preside over the lighting of the national Christmas tree at the Ellipse. Only in this White House could you say it was the least controversial Christmas tree moment of the day.

“Merry Christmas, everybody,” Trump said to a crowd of would-be merrymakers. He repeated the phrase, which he has credited himself with saving, for emphasis. “It’s great to be with you.”

The president did not draw out the moment. After a brief countdown and a minute or so of greeting, the crowd assembled to observe the holiday tradition, Trump took his wife’s hand and ushered her offstage.

The president then headed back to the White House, leaving a group of journalists who traveled with him to the event behind.