At 'Pints and Pitches,' entrepreneurs share ideas with investors, network over beers 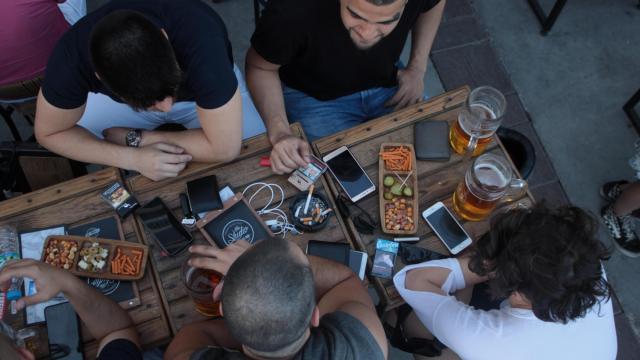 The Town of Chapel Hill has done a number of things over the past decade to encourage its growth and draw businesses to the area. Among the most recent is a recurring meetup called Pints and Pitches, where entrepreneurs share not just drinks, but business ideas.

The idea for the event originated after a roundtable breakfast of more than 70 local entrepreneurs. After the event, many wanted to create a space to continue their conversations on a regular basis.

"The original group met for about a year and a half," said Dwight Bassett, Chapel Hill's economic development officer. "After meeting with that group for a while, we didn't just want to be facilitators, we wanted to provide them the opportunity to have more solidified networking events and encourage an ecosystem."

In response, the Economic Development Department partnered with Innovate Carolina and Launch Chapel Hill, both leaders fostering Chapel Hill's entrepreneurial ecosystem in their own right, to create Pints and Pitches.

The monthly gathering brings together individuals from the entrepreneurship community in Chapel Hill and surrounding areas. Attendees grab a beer together at one of Chapel Hill's quintessential establishments, like Top of the Hill, to network and listen to pitches.

"Pints and Pitches is a way to get entrepreneurs to come out and share what they're working on, whether it's an idea or a company," Bassett said. "It's a great way to practice your pitch and meet other people who can advance your company and win a little prize money along the way."

The event, which is held year-round with the exception of two brief breaks for summer and Christmas, draws a diverse pool of participants that changes monthly.

"We've had everything from startups who want to share what they're up to, to those who ... have been up and running for years," Bassett said. "Even at our first event, we saw connections made between entrepreneurs and existing businesses. We've had a broad range of attendees, from individuals who provide services — like accountants and attorneys — to small businesses and technology development centers."

The mix the networking event draws is due in part to the regular advertising it receives on third-party event websites like Eventbrite. Pints and Pitches is free and open to anyone, two factors that contribute to its ability to attract people from not just Chapel Hill, but the entire Triangle.

One such participant is Arden Rosenblatt, a business launch specialist at the Small Business and Technology Development Center, who moved to North Carolina from Pittsburgh earlier this year.

Rosenblatt, who has experience raising seed money and growing a team for his own startup, attended Pints and Pitches in an effort to connect with others in the local entrepreneurship community.

"It was a good blend of people feeling out their ideas and companies who are starting to really think about going to market," he said. "I was very impressed that there were some serious local investors in the room."

For entrepreneurs, this event hits on two critical elements that Rosenblatt says are essential to a startup's survival: storytelling and networking.

"Opportunities to get in front of people and build relationships with investors and others in the community are essential," Rosenblatt said. "You need a network of cheerleaders. It's one of the most important pieces of the puzzle for early-stage startups, and the pitch practice helps them nail the story they're telling by getting in front of people who aren't familiar with their businesses."

Every month, Pints and Pitches provides a platform for entrepreneurs of all shapes and sizes to share either an idea or a professional pitch. The informal setting encourages feedback from more experienced business owners, and perhaps investors, while creating shoo-in opportunities to develop connections over appetizers and draft beers.

"We're always looking for these stories. Like, who's going to be the next Facebook?," Rosenblatt said. "People get the sense that you fly to San Francisco, share a pitch and come home with a big check, but the truth is that it's much more about building personal relationships and getting people familiar with what you're doing."

In comparing the entrepreneurial environment of Chapel Hill to Pittsburgh, Rosenblatt said the town has something special.

"I've been impressed with Chapel Hill's dedication to its own community. The local groups, the county and the town — it's amazing how active they are," he said. "You have nonprofits and entrepreneurial groups in other areas, but support coming from the local government is encouraging and will pay dividends as they invest in the community."

It's exciting to see Chapel Hill, long known for its distinctive and passionate sports culture, devote similar excitement to entrepreneurs.

"They're doing it out of a passion for Chapel Hill, and to see the town grow and be more than a university town. They want to make it a place where people can start a life and raise a family and be a part of this community for the long term. Everyone loves their hometown, but not every hometown has the support where people put their personal time and money in to get the job done," Rosenblatt said. "I think that's going to pay off."