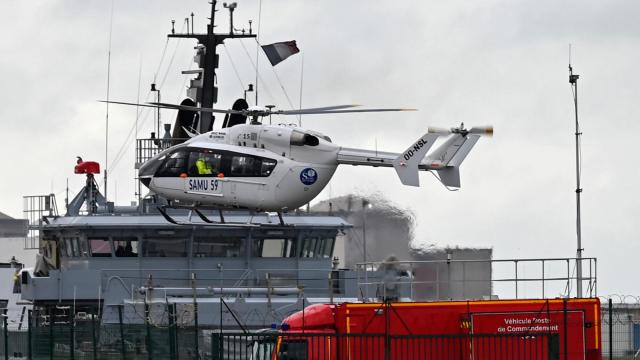 CNN — Four people died, including two children, after a boat capsized in French waters while trying to reach the UK on Tuesday.

The boat was carrying migrants from Dunkirk, in the Nord department on the coast of northern France near Calais, the French Regional Rescue and Surveillance Operational Center said in a statement on Tuesday.

Gaëtan Genel, a communications officer for the Nord department authorities, told CNN on Wednesday that there were four victims: one adult man, one adult woman, and two children aged five and eight years old.

Fifteen people were taken to hospital in Calais and Dunkirk with one man in a condition of "absolute urgency," according to Genel.

Nord maritime authorities said in a separate statement that when the Regional Rescue and Surveillance Operational Center learned of the boat in difficulty they "immediately engaged a number of methods to bring assistance," including a Dunkirk pilot boat and a Belgian army Caïman helicopter.

"One migrant was recovered in the sea by the Belgian army helicopter after becoming separated from the boat due to particularly difficult weather conditions," the maritime authorities said.

The search stopped at 6 p.m. local time as night fell. The authorities said they warned prospective migrants who wished to cross the channel that weather conditions "are often difficult and consequently dangerous to human life."

The prosecutor in Dunkirk has launched an inquiry into the deaths.

"We learned with great sadness the sinking of a boat transporting 19 migrants to England. Despite the full involvements of state resources in the rescue operation, the death toll is heavy and still unclear," Schiappa said on Twitter.

British Prime Minister Boris Johnson offered support to French authorities as they continued to investigate the incident and vowed to "crack down" on those who coordinate the journey.

"[We] will do all we can to crack down on the ruthless criminal gangs who prey on vulnerable people by facilitating these dangerous journey," he said.

The message was also echoed by UK Home Secretary Priti Patel who said she was "truly saddened to learn of the tragic loss of life" in the Channel.

"This tragic news highlights the dangers that come with crossing the channel and I will do everything I can to stop callous criminals exploiting vulnerable people," Patel said in a statement.

UK refugee charity Care for Calais said it was "utterly devastated" by the news of the fatalities, remarking that "this unnecessary loss of life has to stop."

"This loss of life should be a wake-up call for those in power in France and the UK. We have to provide a safe and legal process by which refugees can have their UK asylum claims heard," the statement added.

A statement from charity Save the Children said that the "English Channel must not become a graveyard for children." The statement called on English and French authorities to "come up with a joint plan that ensures the safety of vulnerable children and families."

The number of asylum-seekers arriving to the UK by small boats from across the English Channel has risen considerably since April 2020.

Analysis from PA news agency found that more than 7,400 people have made the perilous crossing to the UK by boat this year.

In August, a man was found dead on a beach in Sangatte, France. He and a friend had tried to cross the English Channel, one of the world's busiest shipping lanes, in an inflatable dinghy with shovels for paddles.

Smugglers previously sent migrants across the Channel on trucks -- including 39 people found dead in a lorry in Essex, near London, last October.

Sangatte Mayor Guy Allemand told CNN in September that more people were traveling on makeshift boats "due to the increased surveillance in ports and tunnels" after Franco-British security measures were ramped up last year.