At least four protesters arrested in Raleigh, one the ReOpenNC organizer

Raleigh, N.C. — At least four protesters were arrested at the ReOpenNC rally in downtown Raleigh on Tuesday. The arrests came as protesters moved from outside the state legislative building to the governor's office.

One of the organizers of the group, Ashley Smith, who spoke to the crowd just before noon, was among those arrested.

Her husband, Adam Smith, told WRAL News that his wife intentionally ignored the orders of police not to step on the sidewalk, saying she wanted to demonstrate civil disobedience. 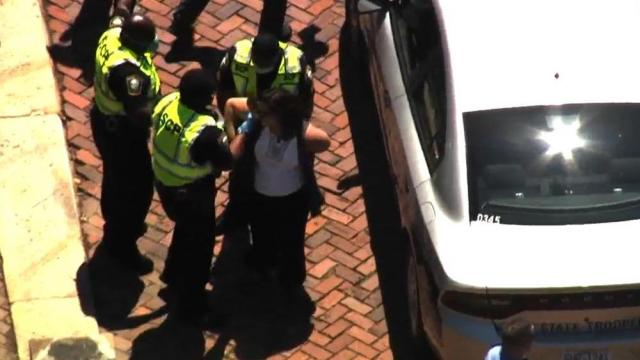 WRAL's Joe Fisher reports the four were arrested after breaking a fence during the protest. Police were guarding the executive mansion before any arrests. Protesters tried to gain entry into the mansion by breaking a lock on the back gate and tried pulling the gate off the hinges. That’s when NCSCP, NCSHP, and RPD surrounded the mansion keeping everyone off the mansion sidewalk.

Protestors chanted, "Reopen right now!" as they walked through the streets of downtown Raleigh for the third time since the coronavirus pandemic.

The group ReOpenNC, an organization against the state's stay-at-home order, this time chose to gather at the state legislature's building while state lawmakers meet to discuss federal funding to help North Carolina recover.

Last week's protest drew hundreds of protesters and counter protesters to the streets. Many carried signs and waved American flags while they walked, while masked healthcare workers and other people in favor of keeping restrictions in place stood and sat on the sidelines. A group of nurses counter-protested the group by simply standing in silence while ReOpenNC marched by them.

Following that historic protest, Gov. Roy Cooper made the decision to expand North Carolina's stay-at-home order until May 8 and closed schools for the rest of the academic year. His order lines up with recommendations by public health officials, although some states, like Georgia and South Carolina, have started reopening non-essential businesses and venues.

'Three moms who got together': Organizer says ReOpenNC not affiliated with any political group or donor

Whitlock was not at Tuesday's protest, sources told WRAL.