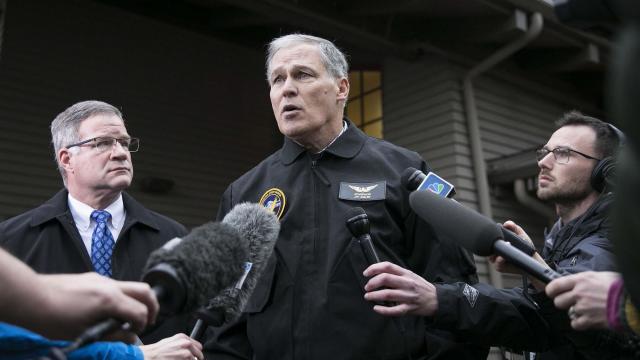 DUPONT, Wash. — A passenger train on a newly opened high-speed Amtrak route jumped the tracks on an overpass south of Tacoma on Monday, slamming rail cars into a busy highway, killing at least six people and injuring more than 75 others, officials said.

The derailment of Amtrak Train No. 501, making the inaugural run of a new service from Seattle to Portland, dropped a 132-ton locomotive in the southbound lanes of the Northwest’s busiest travel corridor. Two passenger coaches also fell partly in the traffic lanes, and two other coaches were left dangling off the bridge, one of them wedged against a tractor-trailer. On the highway below lay seven crumpled cars and trucks, and huge chunks of concrete that were ripped away from the damaged overpass.

All 12 of the train’s coaches and one of its two engines derailed. The National Transportation Safety Board dispatched an investigative team to the scene.

The crash, at 7:33 a.m. and about midway between Tacoma and Olympia, killed at least six passengers, according to a federal official briefed on the crash.

CHI Franciscan Health, a regional hospital network, said that more than 75 people were transported to nearby hospitals, including four who were classified “level red,” reflecting the most severe injuries. Some of those injured were in vehicles on the highway and not on the train.

In reality, the train and the line it traveled on were the products of just such investment.

The state also spent $58 million from the stimulus bill on eight new locomotives, specifically for that service. Washington and Oregon jointly own the Cascades service, and Amtrak operates it.

The state transportation department had boasted that the new route would have a top speed of 79 mph, though it was not clear if a slower limit would be in place where the tracks curved and took the bridge across Interstate 5. Shortly before the accident, a passenger, Chris Karnes, chairman of the advisory board to Pierce County’s transit agency, took to Twitter to marvel at how fast the train was, noting, “We are passing up traffic on I-5.”

The Washington State Department of Transportation has said that the entire Cascades route will have the system by mid-2018, but it was not clear whether it was in operation on Monday on any part of the line.