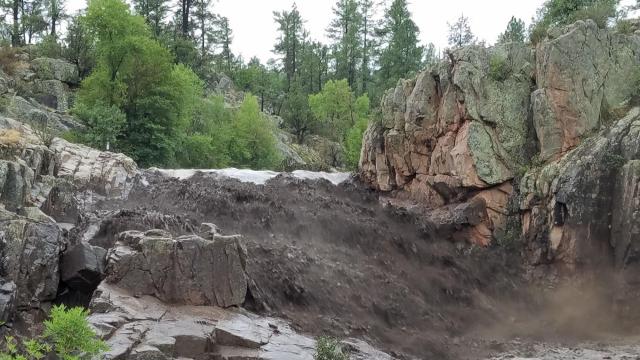 Nine people are dead and one is missing after flash flooding swept away a family at a swimming hole in central Arizona, police say.

The victims have not been identified. Police said Sunday that six children between the ages of 2 and 13 are among the dead, and the oldest victim was in their late 60s.

Cold Springs is just north of Payson in Gila County, and about 90 miles north of Phoenix.

Flooding left behind path of destruction

KNXV in Phoenix tweeted a photo showing the conditions in the area.

The photo showed the grim aftermath of the flooding, which left behind an avalanche of mud and rock that flowed into the swimming hole. The station also posted raw video of a helicopter rescue operation in the area showing muddy water cascading over rock.

KNXV said dozens of people had been swimming in the river when the flooding occurred and quoted Medical District Fire Chief Ron Sattelmaier as saying there was no way of knowing how many people were actually present.

"It's pretty much recovery (now). We don't believe there's anybody left out there," Sattelmaier said.

Gov. Doug Ducey said on Twitter that the state would assist in all ways possible.

"Deepest prayers for those lost in the Gila County tragedy, for their families and the entire community," Ducey tweeted.

Trent Shuem a volunteer with the Tonto Recreation Alliance, was with a group marking trails close to Ellison Creek, about three miles from the swimming hole, when the storm hit.

"In a short period of time, the creek along the side of the road started to get exceptionally heavy," Shue said. "We could hear the roaring of the flash flood in the distance, and it was something to behold. We made sure to stay far ahead of the rushing water, and finally found a safe spot where we could wait it out."

A video recorded by Shue shows a strong stream of water carrying heavy logs and wiping out trees in its path.

The National Weather Service has issued a flash flood watch for much of Arizona, including the greater Phoenix area, through Monday evening. Storms are expected into the middle of the week.

ABC 15 tweeted a viewer's photo in the Sun City area, which showed several cars moving through a flooded street.