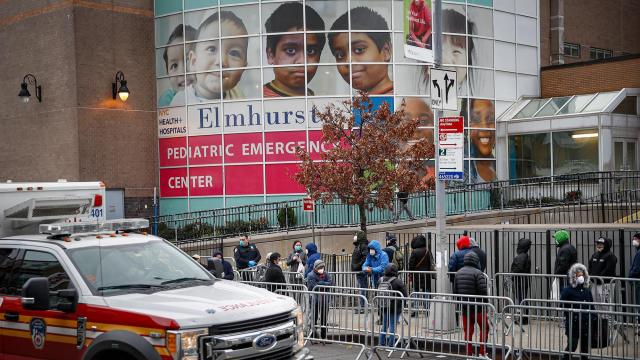 CNN — At least 13 patients died from Covid-19 at Elmhurst Hospital in New York over 24 hours, according to a statement Wednesday from a spokesman for NYC Health and Hospitals/Elmhurst.

The deaths of the patients took place over 24 hours, but NYC Health and Hospitals/Elmhurst said in a statement that number is consistent with the number of Intensive Care Unit patients being treated there.

"Staff are doing everything in our power to save every person who contracts Covid-19," the statement said.

New York had more than 30,000 of the nation's more than 65,000 coronavirus cases, and 285 of its residents have died from the virus. The state has called for tens of thousands more ventilators, hospital beds and intensive care beds to meet the needs of their hospitals.

Elmhurst is at the center of the crisis, the statement said, and staff is working to overcome the overwhelming numbers.

"The frontline staff are going above and beyond in this crisis, and we continue surging supplies and personnel to this critical facility to keep pace with the crisis," the statement said."We are literally increasing the effective capacity of the hospital on a daily basis by sending more doctors, nurses, ventilators and PPE to meet demand."

'Everything is not fine'

But one doctor says reassurances are not enough.

"Leaders from various offices from the President to the head of Health and Hospitals saying things like, 'We're going to be fine, everything's fine.' And from our perspective, everything is not fine," Dr. Colleen Smith, an emergency room doctor at Elmhurt Hospital, said in a video piece for The New York Times.

"I don't have the support that I need and even just the materials that I need physically to take care of my patients," Smith said. "And it's America and we're supposed to be a first-world country."

In the video, Smith shared footage of hospitals beds and a room she said was filled with coronavirus patients. Outside, a refrigerated trailer was seen backed up to the hospital to store the bodies of patients who had passed away.

CNN has reached out to Elmhurst Hospital for official comments on the doctor's statements.

On Thursday morning, a line of people hoping to be checked for coronavirus snaked through barricades outside the facility. Wearing masks, the people stand far apart from one another as they wait.

Inside the situation is overwhelming, according to one person who identified themselves as a doctor but did not want to be named. "All the units are full."

Another person who did not want to be named but identified themselves as a nurse told CNN health care workers are in a "constant state of paranoia," adding, "We don't know if we even have the virus and we're so scared to give it to someone else."

New York has ordered residents to stay at home to curb the spread of the virus and hopefully ease pressures on healthcare systems. And though Gov. Andrew Cuomo pointed to Westchester County -- home to the state's first severe outbreak in New Rochelle -- as a marker for the effectiveness of social distancing, cases continue to climb.

Cuomo warned that the rest of the nation could see numbers like those in his state.

"Where we are today, you will be in three weeks or four weeks or five weeks or six weeks," he said. "What we do here will chart the course."