At a Pittsburgh Crime Scene, Jewish Volunteers Guard the ‘Bodies of Holy Martyrs’ 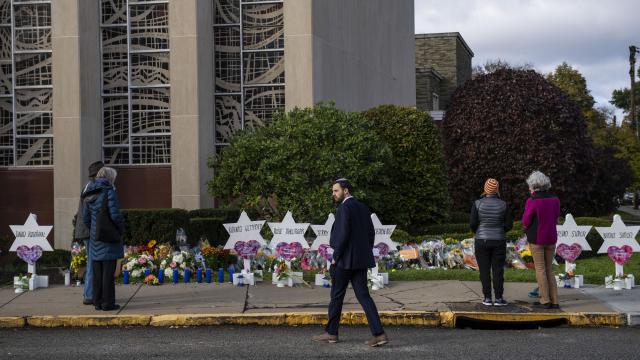 All night long, Jewish volunteers stood solemnly in the rain outside the Tree of Life synagogue, where 11 dead bodies lay inside, sealed off with yellow crime-scene tape. The deceased were not supposed to be left alone, according to Jewish tradition, from the moment of death until burial. So when the medical examiner removed the bodies at 5 a.m. Sunday, the volunteers were there to escort them to the morgue.

Earlier in the night, the volunteers had been allowed to peer briefly inside. They saw a scene of carnage, with bodies sprawled everywhere and prayer books strewn in all directions. Once homicide investigators give them the all clear, they intend to meticulously clean the crime scene. They consider everything left behind to be sacred remains, to be preserved and buried with the bodies.

Judaism has a strict set of laws governing death: Burials are expected to take place as soon as possible, autopsies are discouraged, and bodies are ritually washed and clothed in white shrouds. But balancing observance with a complex criminal investigation is presenting a rare set of challenges for the mourning families and religious leaders. Never before in modern American history have there been so many people murdered in one Jewish community.

“This is what we do — the community needs us and we mobilize — but we have never seen anything like this before,” said Rabbi Daniel Wasserman, who runs the Orthodox burial society in Pittsburgh, known as a chevra kadisha. “These are people who were killed because they were Jewish, they are bodies of holy martyrs.”

Jewish volunteers, led by Wasserman, expect to enter the synagogue Tuesday morning to begin the ritual cleanup: According to Jewish law, all human remains should be buried along with the body. They will wipe down blood with baby wipes, careful not to leave even a drop behind.

“We would be looking for any flesh, any blood, any organic material to give it the proper honor with the bodies,” Wasserman said. “That’s going to be one of the most difficult things.”

The first of the funerals, one for two brothers who were killed and another for a prominent community doctor, are scheduled to take place Tuesday. The intense grief is likely to play out in living rooms across the city as hundreds or even thousands of visitors offer condolences at the homes of the families of the deceased during shiva, the seven-day mourning period that follows burial.

Jews do not mourn alone. During shiva, community members visit the relatives of those who have died, bringing food and standing together for kaddish, the memorial prayer. They sit with them, speak fondly of those who have passed on and comfort those left behind. This week, in the close-knit Jewish community of Pittsburgh, there will be many overlapping shivas. Rabbis for the three congregations that met at the Tree of Life have been grappling with how to help families navigate public and private mourning. Calls have come in from across the country from people wanting to visit during shiva, but the families may not be eager to greet strangers. At least one family has requested total privacy.

Rabbi Jeffrey Myers, who leads the Tree of Life congregation, underscored the magnitude of so many deaths in television interviews Monday morning.

“I have a congregation to take care of. I have families that need me,” Myers said on CNN. “I have funerals to plan.”

Since she helped create the New Community Chevra Kadisha in Pittsburgh in 2004, Malke Frank has prepared dozens of bodies for burial. Each time, members begin by saying a prayer for guidance, followed by asking for forgiveness in case any mistakes are made during the ritual, using the person’s Hebrew or Yiddish name to address the body, as a sign of respect. They use three pails of warm water to wash the body, careful to remove nail polish or anything else that is not naturally present. The face of the deceased is constantly covered — if the dead cannot see the eyes of the living, tradition goes, the living cannot see the eyes of the dead.

When the washing is done, they end with a phrase from the Song of Songs, a poem from the Jewish bible: “You are beautiful my beloved friend and there is no flaw in you.”

None of this, Frank said, will have prepared her for what she and others will see when they begin the tahara, as the ritual washing is called, for those killed Saturday.

“We have no doubt this will be the most difficult,” she said. “This is going to be very, very different because of the extent of the damage of the bodies.”

One of the victims of Saturday’s shooting, Dr. Jerry Rabinowitz, was a dedicated volunteer with the New Community Chevra Kadisha, working with the same men who will prepare his body before it is to be buried Tuesday.

If it is too much to bear, Frank said, another group of volunteers will step in. Leaders of a national association of chevra kadisha have flown in to help comfort those volunteers.

Although autopsies are generally avoided in Jewish tradition, there was no doubt that each of the bodies would need to be examined for evidence in the criminal case. Once the bodies were with the medical examiner, Wasserman ensured that a shomer, as the guard is called in Hebrew, was in the building to keep watch over them as they went through the process. “The idea being that when we die, our soul stays with us until our body is laid to rest and then the soul is free to go,” said Sharon Ryave Brody, who runs Ralph Schugar Chapel, a Jewish funeral home in Pittsburgh that is handling services for at least nine shooting victims. “During that time, that soul is kept company and not alone.”

The dead are buried as soon as possible, often the day after death. But it was clear that would be impossible after the shooting.

Speedy burial is meant to not only allow mourners to begin to grieve with the community, but also to honor the dead, said Rabbi Jason Weiner, the director of spiritual care at Cedars-Sinai Medical Center.

“Death is a transition from this world to the next and it’s the way we show basic human dignity, no matter what you did in life,” he said. “This is serving someone when a person cannot do anything for themselves, when they cannot pay it back.”