Assessing the Cost of Moving Home 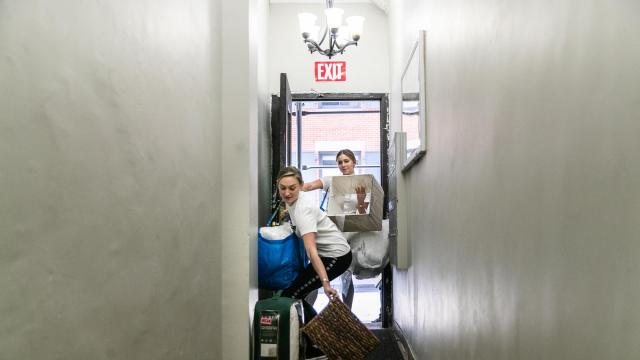 Emma Olcott graduated from Skidmore College in the spring of 2017 with a degree in business administration and a case of professional uncertainty.

“I wasn’t sure where I wanted to be, whether I’d end up in New York or another city,” she said.

She also wasn’t sure if fashion, the field in which she had interned, was the perfect fit. So she did what 19 percent of all recent college graduates do, according to a Pew Research Center report: She moved in with her parents.

A little more than a year later — after working as a nanny and landing a marketing job at LT Apparel Company in Manhattan — Olcott, 23, had saved enough money to move out of her parents’ Summit, New Jersey, house. In October, she and two friends from Skidmore signed a lease on a fifth-floor walk-up in SoHo.

It was a happy ending for all involved, said Olcott and her parents. But according to sociologist Anna Manzoni, an associate professor at North Carolina State University, it might have been even happier. In a study published in August in the Journal of Youth and Adolescence, Manzoni found that young adults who are given financial help instead of living rent-free at home do better professionally.

The study looked at about 7,500 18- to 28-year-olds from the Panel Study of Income Dynamics, which tracks job status. It found that college graduates whose parents offered money, whether in the form of paid bills or cash outlays, did especially well professionally, while those who lived at home did especially poorly.

Graduates who got the most cash, $15,000 a year or more, did best of all, ranking 6 points higher on a scale of occupational status than those who got little or no financial help. Graduates living with their parents, on the other hand, ranked 10 points lower on the occupational status scale than their friends who lived independently.

Manzoni cannot offer definitive reasons for her findings, noting that she studied trends rather than individual trajectories, but she does have theories.

“One explanation is that, when you get direct financial transfers, you can use that money to move to a city where you have better job opportunities,” she said. A new graduate from Mississippi who studied theater, for example, might find better career prospects in New York.

A second reason is income inequality. “Parents who give directly may have higher socioeconomic status than parents who say, ‘I can’t give you a check, but I can let you move home.'” Children of the well-to-do are likely to have better connections and access to individuals at influential companies.

For the Olcotts and families like them, who are not burdened by student loan debt and may be able to choose between offering liftoff through money instead of a childhood bedroom, Manzoni’s study has the makings of a quandary. For one thing, they may want their new graduate to be home, at least for a while, and they may have qualms about letting them go with pockets full of money before a steady paycheck has been secured.

A hefty handout, despite Manzoni’s findings, can run counter to a family’s work ethic.

But worries about the destructive side of giving recent graduates money may be ebbing in light of newer parental concerns. Self-preservation, for example. A report in March from the London School of Economics found that parents’ quality of life took a hit when their adult children moved back (its title, “Parents’ Lives Made More Miserable by the Boomerang Generation Returning Home,” says it all). That bit of bad news, backed by observations like those of Mary Beth Storjohann, a financial planner who works with millennials and the generation behind them, may help persuade parents to write a check instead of insisting that grown children pay their own way.

“In my experience working with people in their 20s and 30s, the ones who get sums of money are moving forward at much faster paces than the ones who move home,” Storjohann said. She attributes the professional strides of clients living on their own to the strings some parents attach to seed money.

“When you live with your parents, you get comfortable having someone else do your laundry and cook your meals, and you might not feel compelled to move out,” she said. “You might wait to find the perfect job instead of taking one that could lead you in an unexpected direction.”

Parents like Mary-Liz and Steven Lichtenfels of McLean, Virginia, take a middle way, steering their children toward quick independence without emptying their own bank accounts. They asked each of their three children, now in their mid- to late 20s, to move home after college and save a cushion of money to last them for months: $10,000. The savings, they made clear, were meant to keep them out of their old bedrooms permanently.

For them, the strategy paid off. “Our philosophy was, come home and get a job and make some money and then get out,” Lichtenfels said. All three of the Lichtenfels children, none of whom were in their old bedrooms longer than a year post-graduation, are now employed in their chosen fields and financially independent. That includes paying for their cellphones, even though they are still on the family plan. “We Venmo them every month for their phone expenses,” Lichtenfels said.

That is an especially notable accomplishment. Another Pew study from 2015 shows that 61 percent of parents paid for recurring expenses, like cellphone bills, or “special circumstances” for their 25- to 34-year-old children.

The Olcotts may be among them in a few years, when Emma turns 25. “I’m still on my dad’s health insurance, and my parents still pay for my phone,” she said.

She expects to need that support for a while. Many of her friends are in the same boat: “We talk about it,” she said. “It’s just kind of the way it is for our generation.”

Brad Klontz, a financial psychologist and associate professor at Creighton University’s Heider College of Business, offers these tips for parents unsure about how to best help their adult children thrive.

— If you have decided to give money to help start a child’s career, make sure it comes with conditions. “You have to be able to say, ‘Here’s the money, go make it work.’ It can’t be a recurring payment, or you’ll create financial dependency.”

— Before you hand out money, think about established money patterns. “What has your child done with opportunities in the past? Did they take your financial support and stay home playing video games? Or did they put it to good use?”

— “We have a natural tendency to seek pleasure and avoid pain. When an adult comes back home, his standard of living is often much higher compared to what it would be if he was living on his own. If you’re doing his laundry and cooking his meals, where is his motivation to leave?”

— Limitless help will backfire. “The money you give a grown child may be coming from a place of love and care, but you may be doing psychological harm by enabling that child financially. Financially dependent people report lack of motivation, lack of creativity and resentment toward the person giving them money.”