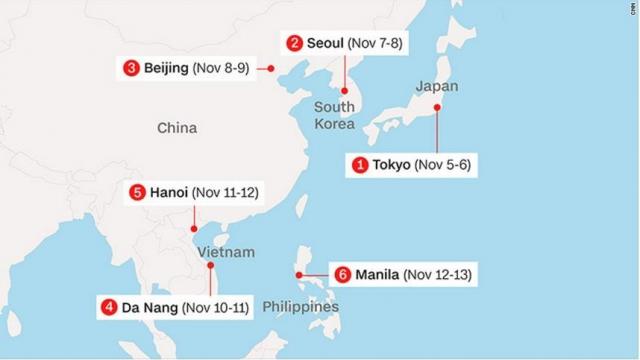 HONG KONG (CNNMoney) — President Trump is heading to Asia and nobody there knows quite what to expect.

Trump, who prides himself on unpredictability, is parachuting into a region where he's thrown decades of American economic leadership into doubt.

Since taking office, he's killed the world's biggest free trade deal, taken aim at another in NAFTA, threatened to tear up a compact with South Korea, and slammed U.S. economic relationships with major Asian countries as "horrible."

So how do officials in the region view his trade policies and impending visit?

"With a certain amount of alarm, uncertainty and concern," said Deborah Elms, executive director of the Asian Trade Centre in Singapore, which advises governments and companies. "The question on everyone's mind is, what is it the United States is proposing?"

As little Trump as possible

By axing the Trans-Pacific Partnership (TPP), a massive trade agreement spanning 12 nations, Trump did away with a deal that the U.S. had spent years working out with countries like Japan, Australia and Vietnam.

"Without the TPP, there is no narrative of American economic partnership with Asia," said Aaron Connelly, a research fellow at the Lowy Institute in Sydney.

Trump left the field wide open for China, which is eagerly pushing President Xi Jinping's grand project to increase trade along historic silk road routes across Asia and beyond.

By showing up in person, Trump has a chance to reassure nervous allies and set a new vision for America's role in Asia. But Connelly and other experts are skeptical.

"My view is it's better that Trump spends as little time in Asia as possible," he said, suggesting relations with countries in the region are better handled by lower ranking U.S. government officials.

"U.S. Asia policy under Trump hasn't been nearly as bad as you would have expected from his campaign," Connelly said, referencing his threats to slap huge tariffs on China and label it a currency manipulator. "But the more you involve him in policy, the higher the risk it will look more like his campaign."

The situation is complicated by the fact that key U.S. diplomatic posts for Asia that help promote American economic interests remain unfilled. U.S. companies lack help navigating the region and government's understanding of what's happening is weaker. That's a particular issue ahead of a major visit like Trump's.

"The depth of Asian knowledge coming in on the U.S. side is looking very thin in terms of who is planning this trip," Elms said. "I'm a little alarmed."

Rather than pursuing broad regional agreements, Trump says he wants one-on-one talks with countries. He promises American workers he can get them a better deal by fixating on bilateral trade deficits and surpluses. But that approach isn't playing so well with trading partners like Japan.

"America First means that everyone else comes in last," Elms said. "It's not the best negotiating strategy from the point of view of the other party."

Asian leaders have played along with Trump's wish for them to trumpet what they're doing for the U.S. economy when they visit him at the White House, often reciting lists of investments their countries were already planning.

"There is a cost because it creates the appearance that these leaders are coming to Washington and paying tribute," Connelly said. "Over time, I think it's a really corrosive exercise."

The U.S. is still 'indispensable'

The Chinese government, meanwhile, puts in time visiting other countries in the region and talking up the investments it's making there.

"China is very good at selling their economic engagement," Connelly said. "Much better than Western countries are."

The irony is that U.S. companies have invested far more in many Asian economies than their Chinese rivals.

"The U.S. market, capital, technology ... cannot be easily replaced," said Shalendra Sharma, a professor at the University of San Francisco who specializes in globalization. "The American economy, with all its flaws, is still indispensable."

The danger is that Trump takes this U.S. advantage for granted rather than trying to build on it.

In the absence of leadership from the U.S., governments in the region are pushing ahead on their own. The 11 other countries who signed up for the TPP have been negotiating a new agreement that they may announce at a regional summit in Vietnam that Trump is also attending.

But Trump is more likely to be focused on the nuclear threat from North Korea during the trip. That could reduce the risk of a spat over trade -- for the time being, at least.

"Sooner or later, it is possible that he will become tired of the North Korea issue, especially once it becomes clear to him how little leverage he has," Gareth Leather, an analyst at research firm Capital Economics, wrote in a note. "If this happens, trade tensions with China or South Korea could easily start to flare up."