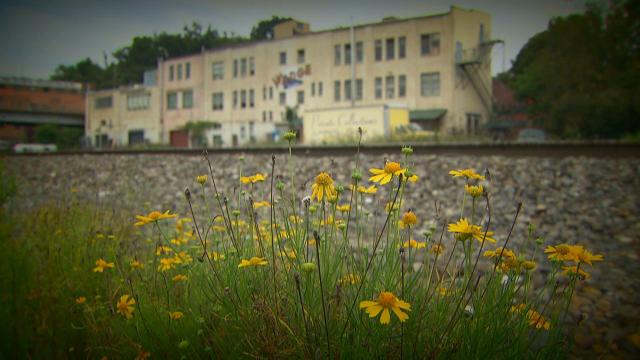 Asheville's River Arts District is a collection of old warehouses, storefronts and alleys. More than 130 artists exhibit their works in studios roughly off Depot Street, between West Haywood and Bartlett streets.

Artist Pattiy Torno has been making fleece and other eclectic clothing in the area since before there was an official arts district.

Visitors can stop by artists' studios, whose hours vary. A stroll down the streets, though, is equally likely to turn up plenty of artists at work.

Don't be fooled by the down-home atmosphere. The artists in the district are professionals, and for most of them, it's a full-time vocation.

Artist Robert Gardner said he spends as much time as he can in the district. "Being here is the real work I want to be doing," he said.

Gardner works with metal and paint, but says his aim is to bring a softer element to art.

"So many movements that are revolutionary in art are kind of sterile. I'm trying to bring a human touch to it," he said.

Performance artist Jonas Gerard was born in Morocco and raised in New York City before he found his way to Asheville.

"Everybody said, 'Go to North Carolina. I said, 'What's there?' They said, 'Mountains,'" he narrated the discussions that led him there.

In Asheville's River Arts District, Gerard said, he found what so many other artists had: home.