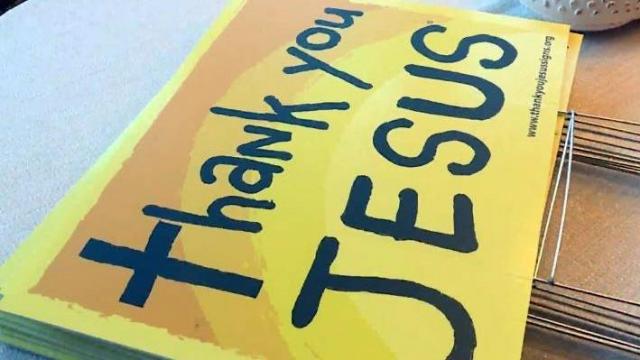 When Lucas Hunt, 17, thought of that line, he never thought it would get this far. Now, the Asheboro teen's small project has turned into a global movement.

Today, more than 100,000 of these signs line the lawns of homes in all 50 states, across a dozen countries and in two languages.

"People kept calling and asking if they could have one, and you can't tell someone no," Hunt said.

The idea started as an Easter project in 2015, and it's evolved into a message to be celebrated year-round.

"Really, it's a Christmas message," Hunt said. "Without Christmas, you wouldn't have Easter."

The sign means something different to everybody who owns one. For some, it's a reminder to give thanks.

"A lot of us have heard stories about how the sign has impacted them on their life," Hunt said.

"Whether you do believe or don't believe, we hope that it plants a seed in somebody's heart," Hunt added.

For Hunt and his team, the signs have come to represent giving back.

"It was all about planting them, instead of selling them," he said.

When the project took off, and the money started rolling in, Hunt knew he didn't want to keep it.

He and the signs' co-creator Connie Frazier decided to create a non-profit, the Thank You Jesus Mission, to donate grants to local Christian organizations.

Every time you see one of these signs, you know it's funding projects like serving breakfast and a Bible study for homeless people in Davidson County, providing transportation for after-school programs for low-income kids in Rowan County and helping to fund an upcoming conference in Concord for pastors in small towns and rural areas.

"This has been one of the most humbling experiences I've ever gone through, to drive down a road and see the name of Jesus in somebody's yard, and knowing that person loves God and want so publicly display it," Frazier said.

Hunt stopped setting goals to sell a certain number of signs. Instead, his goal is to put the future of the movement entirely in God's hands and remind everyone who drives by these signs of the reason for the season.

You can buy the signs for $8 each on the movement's website. They also sell the phrase on rubber bracelets, magnets, and lawn flags.