As Volcano Erupts in Hawaii, ‘I Can See My House Burning’ 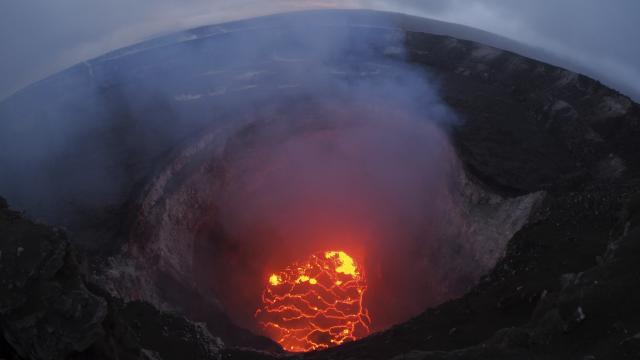 More than two dozen homes have been destroyed since the Kilauea volcano began erupting last week, officials said on Sunday, as at least 10 fissures emerged, spewing lava into residential neighborhoods on the eastern edge of the island of Hawaii.

The island has been hit by hundreds of earthquakes in recent days, including one Friday with a magnitude of 6.9. The Hawaii County Civil Defense Agency also warned about the threat of high levels of deadly sulfur dioxide gas.

Heath Dalton, a resident of Leilani Estates who was evacuated Friday, returned to his home Sunday morning. He drove a truck and trailer, planning to pick up boxes of his family’s possessions that he had packed earlier, but instead found his home engulfed in flames.

“I couldn’t go up my road,” he said. “It had huge, huge coverage of lava probably close to 10 feet tall.”

He drove around to another street, where an inch-wide crack, spewing steam and growing in size, bisected the road.

“I debated, then I just decided to go, so I gunned it,” he said. When he got to his street, he knew his trip had been in vain.

He called two neighbors to tell them their houses were gone. “I look at mine and I can see my house burning,” he said. “At that point I called my wife and said there’s no reason for you to come, there’s nothing to get.”

Officials said Sunday that 26 homes had been destroyed but they saw that number as likely to grow because the flow of magma was expected to continue.

“There’s no sign of it slowing down,” Talmadge Magno, the civil defense administrator for Hawaii County, said Sunday at a news conference. “We had some pauses yesterday, but it seems like there’s a lot of magma underground.”

He also said the levels of sulfur dioxide were “still high.”

The Civil Defense Agency said residents of the Leilani subdivision would be allowed back into their neighborhood from 7 a.m. to 6 p.m. daily to check on their property and remove possessions. Lanipuna Gardens was closed, however, because of dangerous volcanic gases, the agency said.

Nonresidents were warned to keep away. “Please, the residents of Leilani need your help,” the agency said. “This is not the time for sightseeing. You can help tremendously by staying out of the area.”

Fountains of lava have reached heights of 330 feet, the Hawaiian Volcano Observatory said. One video posted by the observatory showed orange and black lava belching smoke and flames as it crawled down a residential street. Other images taken by helicopter showed molten rock inching across the subdivision, setting alight the structures it touched.

While the property damage is increasing, no deaths or injuries have been reported.

Dalton, who works for Spectrum Cable, said he, his wife, Denise, their 4-year-old daughter and 3-year-old son were unscathed. But their house was a complete loss and for now they are staying with friends.

He expressed frustration at not having been allowed to return earlier to remove items before his house burned. But he praised the support of his community, which has helped displaced families and created online networks that have been the quickest source for detailed information.

“Furniture, clothing, you name it, everything we own is gone,” he said. “We have two vehicles. I have my family and I have my health. It could be worse.”