As Trump wrestles with defeat, pardons loom for allies -- and himself 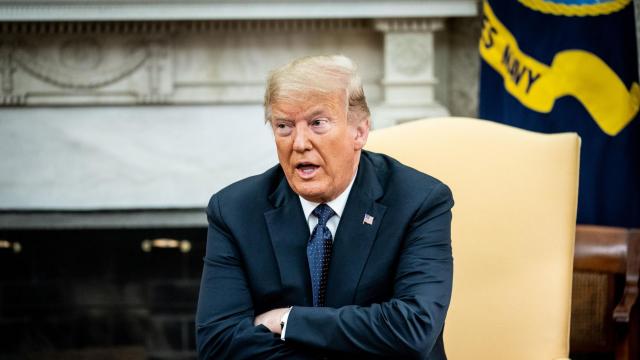 CNN — President Donald Trump is refusing to concede the 2020 election to President-elect Joe Biden, but once Trump moves to the acceptance stage of his defeat, the urgent business of presidential pardons is likely to surge to the top of his checklist before leaving office.

From campaign associates to members of his family -- and even possibly himself -- Trump could use his expansive pardon power to try to settle legal questions on his way out the door.

Current and former Trump administration officials say there's been minimal preparation for an expected onslaught of clemencies, as Trump is still pursuing dubious legal challenges to the election. But his Twitter feed over the past three years offers a working list of where the President might turn to wield his pardon power -- primarily toward those targeted by former special counsel Robert Mueller's investigation.

Perhaps the biggest looming pardon question is whether Trump will consider granting himself a pardon, amid state investigations into his business and finances and the prospect of federal investigators scrutinizing him after he leaves office.

Trump has been asking aides since 2017 about whether he can self-pardon, former aides tell CNN. One former White House official said Trump asked about self-pardons as well as pardons for his family. Trump even asked if he could issue pardons pre-emptively for things people could be charged with in the future, the former official said.

"Once he learned about it, he was obsessed with the power of pardons," the official said. "I always thought he also liked it because it was a way to do a favor."

Trump's pardons, however, would only cover federal crimes, and would not protect him or others from ongoing investigations into the Trump Organization being led by the New York attorney general and the Manhattan district attorney.

Former aides to Trump are split on whether Trump would actually consider giving himself a pardon. Some see it as a near-certainty -- "Of course he will," the former official said -- while others believe it's unlikely, because doing so would imply he's guilty of something.

To date, Trump's record on presidential pardons is -- like much of the rest of his presidency -- marked by personal connections, showmanship and an aversion to going through official government channels.

The Office of the Pardon Attorney, a Justice Department bureaucracy that is usually active in vetting clemency applications has been left out of Trump's highly personal process in deciding pardons, playing a role in only eight of the 27 pardons issued by Trump, according to a spokeswoman.

Instead, beneficiaries have won clemency by getting their requests to Trump through friends, Fox News personalities or Hollywood celebrities who talk to the president. That unusual pipeline has worked for people like Joe Arpaio, former Arizona Sheriff, Dinesh D'Souza, right wing commentator, and Michael Milken, a financier convicted of securities fraud.

Trump has also granted pardons at the urging of Kim Kardashian West, who made her case in the Oval Office. And earlier this year, he commuted the sentence of his longtime confidante Roger Stone, whose conviction stemmed from the Mueller investigation.

Trump's arrangement is likely to benefit people close to the President who are already on his radar because he claims they were unfairly targeted for prosecution.

Among those likeliest to benefit are former Trump campaign associates who have convictions following Special Counsel Robert Mueller's investigation: Michael Flynn, George Papadopoulos, Paul Manafort and others. Trump has long claimed he and his campaign were illegally targeted and that campaign associates only got into trouble because of their association with him.

Several officials said Flynn -- whose guilty plea to Mueller is being litigated after the Justice Department sought to dismiss it earlier this year -- would be at the top of Trump's list of pardons.

Trump has previously dangled pardons for witnesses who testified before the special counsel, including Manafort and Flynn, and Mueller's report detailed Trump's public discussion of pardons in the volume on possible obstruction of justice.

Sources say other potential beneficiaries of Trump's lame-duck pardons include Charles Kushner, his son-in-law Jared Kushner's father, who was prosecuted more than a decade ago by then-US Attorney Chris Christie. Trump Organization chief financial officer, Allen Weisselberg, who received immunity in the Michael Cohen case, and Trump's personal attorney Rudy Giuliani, who is under federal investigation, could also be considered.

The White House declined to comment on the matter.

The notion of presidents using pardons on their way out the door is nothing new. On his final day in office, former President Bill Clinton pardoned his brother, Roger Clinton, on decade-old drug charges, and Mark Rich, who had fled the US after being indicted for tax evasion. President George H.W. Bush pardoned his former Defense Secretary Caspar Weinberger for his role in the Iran-Contra scandal.

The idea a self-pardon has animated Trump's liberal critics for years. And Trump himself, on Twitter of course, made clear the thought has occurred to him. "As has been stated by numerous legal scholars, I have the absolute right to PARDON myself, but why would I do that when I have done nothing wrong?" Trump tweeted in June 2018.

Trump's legal team and administration officials have downplayed the prospect. There's no precedent for doing so and the constitutionality of such a pardon is untested constitutionally, with legal experts split on whether it would be legitimate.

The Justice Department looked at the question in the Nixon era and concluded it wasn't within the president's power to pardon himself. "Under the fundamental rule that no one may be a judge in his own case, the President cannot pardon himself," the Office of Legal Counsel wrote in August 1974.

The OLC memo laid out alternate possibilities of which Trump could avail himself: he could temporarily declare himself unable to perform his presidential duties, allowing the vice president to act as president, including by issuing him a pardon, and then the president could resume his duties as president, or resign. The OLC memo also said Congress could pass a legislative pardon.

Several people familiar with the matter said that despite the President's interest, the White House counsel's office under Don McGahn, Ty Cobb and Emmet Flood didn't research the matter and didn't consider it as a serious possibility.

"He asked stuff all the time -- asking this stuff of everybody," one person said.

One former official said Trump was so fascinated by his pardon powers that senior level officials would sometimes bring up their research on the matter just to get Trump off another subject they wanted to steer away from.

There is precedent for a pre-emptive pardon -- former President Gerald Ford pardoned former President Richard Nixon after he resigned from office. But another senior former White House official cautioned against the notion that Trump would give himself a pardon, because it would suggest that he'd done something criminal that required it.

Another reason it was less likely, the official said, was that a pardon would only apply to alleged federal criminal behavior -- meaning it wouldn't stop the New York state attorney general's or the Manhattan district attorney from investigating him.

Last month, Trump's son Eric Trump sat for a deposition as part of an investigation from New York Attorney General Letitia James into whether the Trump Organization inflated the value of Trump's assets.

And the Manhattan District Attorney Cy Vance is still fighting in court to gain access to Trump's tax returns, as part of his investigation into the Trump Organization.