As Trump Holds Firm on Shutdown, He Never Mentions One Group: Federal Workers 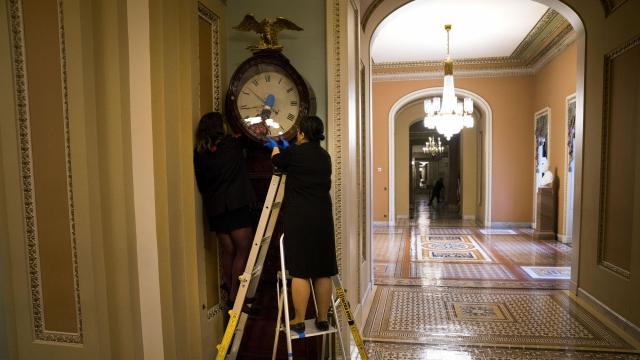 WASHINGTON — He has talked about the need for “protection” along the country’s southern border. He has said he is willing to keep the government shut down indefinitely to ensure the funding of the wall he says will provide that protection. And he has complained about spending the holidays alone in the White House, with no one around with whom he could negotiate.

The one thing President Donald Trump has not talked about publicly during the partial government shutdown is the 800,000 federal workers who are not being paid because of it.

Trump’s apparent indifference to the Transportation Security Administration agents, correctional officers, scientists and other federal employees caught in the crosshairs of a political standoff presents a remarkable contrast with how other presidents have made a point of trying to demonstrate their empathy during shutdowns. In 2013, for instance, President Barack Obama wrote an open letter to the workers affected when the government was closed.

“None of this is fair to you,” he wrote, adding, “You and your families remain at the front of my mind.”

Even Ronald Reagan, the president best known for taking on government unions, acknowledged during a 1981 shutdown the “temporary hardship” it caused for government workers. But so far, Trump has not publicly recognized even that.

“It reflects something broader,” said Stuart Appelbaum, executive vice president of the United Food and Commercial Workers International Union, which represents 1.3 million members. “A lack of comprehension of what everyday Americans go through to survive.”

Trump’s one mention of government employees in his daily Twitter blasts in recent weeks made it clear that he viewed many of them as a hostile force, part of the “deep state” he and his supporters mistrust.

“Do the Dems realize that most of the people not getting paid are Democrats?” Trump wrote on Twitter last week.

Trump’s view of a predominantly Democratic workforce, however, is an “unproven statement,” according to Paul Light, a professor at New York University’s Wagner Graduate School of Public Service. “The inference is because federal employee unions have a large foothold in the federal workforce, and unions are Democratic. But I’ve never seen a survey that asks that question.”

Bill Samuel, director of government affairs for the AFL-CIO, said the political breakdown of his 12.5 million members is bipartisan and mirrors that of any large cross-section of America. “He seems to see them as well-paid professionals working in downtown Washington, D.C.,” Samuel said. “But on average, politically, we’re like the rest of the country.” About 79 percent of federal employees work outside the Washington area, with Texas, Virginia, California and Maryland having the largest number of government workers.

But Trump has little sense of the life of a typical government employee and views them negatively overall, according to former White House officials. One former official said Trump saw government workers as part of the bureaucracy, and some as part of the deep state.

“The president cares about the future of all American workers in the public and private sector that have been forgotten by phony politicians for decades, and he wants to ensure their safety and security, which is why he continues to fight for border security,” Gidley said.

Marc Short, the former White House director of legislative affairs, pointed out the vocal support Trump had received from some federal employees. “I think it’s fair to say he’s cherished the support he’s gotten from federal unions and the National Border Patrol Council,” he said. “And I never heard him harbor any ill will toward government workers.”

On Thursday afternoon, in a surprise appearance in the White House briefing room, Trump appeared with a group of Border Patrol and Immigration and Customs Enforcement agents, government workers who enthusiastically endorsed his fight for a wall.

But the impression Trump has left on union members who do not work directly on national security issues appears to be much different.

“He hasn’t shown any respect for what these workers do,” said Paul Shearon, the president of the International Federation of Professional and Technical Engineers, which represents about 80,000 workers across the country. “People are truly disheartened. Unfortunately, it doesn’t just affect the relationship between Donald Trump and the workforce. It affects the relationship between the United States government and the workforce.”

Trump’s views about government employees appear to be an outgrowth of how he viewed city workers when he was making a name for himself as a builder in Manhattan.

In his book, Trump recalled being appalled by a city worker on the job who “seemed to be on break.”

“In the afternoon he was also on break, and it looked as though it was the same long break he’d begun in the morning,” he wrote. At the same time, working in real estate in Manhattan and Atlantic City, Trump developed a reputation for how he treated workers on his projects.

“He has a dispensable attitude about the replaceability of people,” said Jack O’Donnell, a former president of the Trump Plaza Hotel and Casino in Atlantic City who has become a critic of his former boss. “The whole concept that it’s a privilege to do business with him, that was absolutely a theme he talked about all the time in terms of negotiating contracts. That was the leverage he wanted us to use.”

In Atlantic City, where he at one point ran three casinos, Trump famously stiffed blue collar vendors, failing to pay plumbers, waiters and subcontractors. A USA Today analysis published in 2016 discovered at least 60 lawsuits filed by people accusing Trump and his business of not paying them for work completed. The trail of unpaid bills has followed him to his golf courses, where in 2016 a Florida-based contractor took Trump to court, claiming he did not get paid for a $30,000 paint job at the Trump National Doral Miami golf course.

As president, he has signed executive orders to freeze the pay of federal workers this year and to make it easier to fire them, an attempt that was struck down in court. Trump has defended ICE agents, the military and Border Patrol officers, but he has also said that the government has “plenty of rogue employees” and that he liked the idea of federal workers signing nondisclosure agreements.

At the July swearing-in of Robert Wilkie, the secretary of veterans affairs, Trump bragged that he had removed “federal employees who mistreat our veterans, of which, unfortunately and incredibly, there were plenty.”

Three months into his presidency, Trump extolled President Andrew Jackson, noting that “to clean out the bureaucracy, Jackson removed 10 percent of the federal workforce.” And in his first address in front of a joint session of Congress in 2017, Trump ticked off a list of his accomplishments, noting with pride that he had “placed a hiring freeze on nonmilitary and nonessential federal workers.”