As race for governor heats up, a change in tone for McCrory?

Raleigh, N.C. — Gov. Pat McCrory hasn't been shy over the last few weeks in his support for a spate of conservative causes that have ignited debate beyond the borders of North Carolina.

In late October, he signed into law last-minute legislation that would ban so-called sanctuary cities for undocumented immigrants. In the aftermath of the Paris terrorist attacks, he echoed the calls of Republican leaders in Congress – as well as some Democrats – in calling for a "pause" on the resettling of Syrian refugees. Over the weekend, he urged Attorney General Roy Cooper, a potential Democratic challenger in the 2016 race for governor, to join the defense of a Virginia school district facing a discrimination lawsuit over the use of bathrooms by a transgender student.

It's far from unusual that the first-term Republican governor would align himself with his GOP counterparts, especially on issues that poll prominently among conservative voters. But as he faces what's shaping up to be a tough re-election fight in 2016, political scientists and strategists say they have seen something of a change in demeanor from a candidate who has historically narrowed his focus to the economy – and at times defied his own party on social issues.

"He hasn't got the hardest edge of all Republicans," David McLennan, professor of political science at Meredith College in Raleigh, said. "He's not a naturally combative person, and he certainly is not going to be confused with Donald Trump in terms of style or substance." 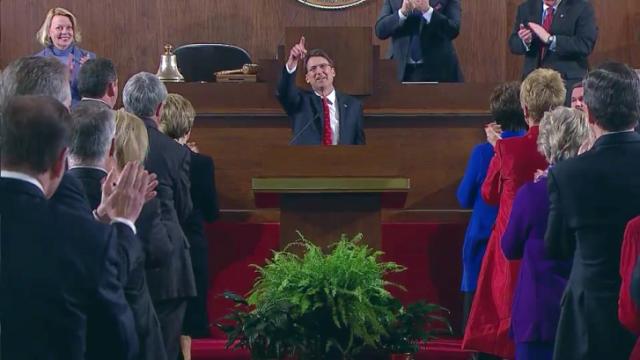 Defying the party – with mixed results

On several issues, in fact, McCrory has staked out positions in direct opposition to Republican state lawmakers, who since 2011 have controlled both houses of the General Assembly.

In the wake of the Supreme Court's decision to legalize same-sex marriages across the country, McCrory vetoed a controversial bill that would allow magistrates in the state to recuse themselves from performing marriages – despite his belief that marriage should be between a man and a woman.

"We are a nation and state of laws," McCrory wrote in a statement at the time. "Whether it is the president, governor, mayor, a law enforcement officer or magistrate, no public official who voluntarily swears to support and defend the Constitution and discharge the duties of their office should be exempt from upholding that oath."

The act drew praise from marriage equality groups and ire from gay marriage opponents and several Republican lawmakers, who called the governor's argument a "logical fallacy." The General Assembly easily overrode the veto in June with the required three-fifths majority.

As the debate over the Confederate flag raged over the summer following the shooting deaths of black churchgoers in South Carolina allegedly by a white supremacist, McCrory was also vocal about ending the Sons of Confederate Veterans license plate offered by the state Division of Motor Vehicles. His comments were accompanied by little action, but hundreds of people, many of them McCrory supporters, wrote to the governor to slam his statements.

Catawba College provost and political science professor Michael Bitzer, who teaches just 45 miles away from the Charlotte City Hall where McCrory held office for 14 years, said the last few months have presented opportunities for the governor to motivate conservative voters.

"Certainly, the sense that I'm getting is that he's moving toward energizing the core base of the Republican Party in preparation for a year from now," Bitzer said.

As next year's election approaches, Bitzer said McCrory will need the support of a few critical GOP factions, such as national security conservatives and social evangelicals, who are likely to take note of his responses to the Paris attacks and social issues such as transgender bathrooms.

"For as much as he likes to portray himself as the moderate Republican, that faction or wing of the Republican Party is not as influential as evangelicals or the rural conservatives the party has become in North Carolina," Bitzer said. 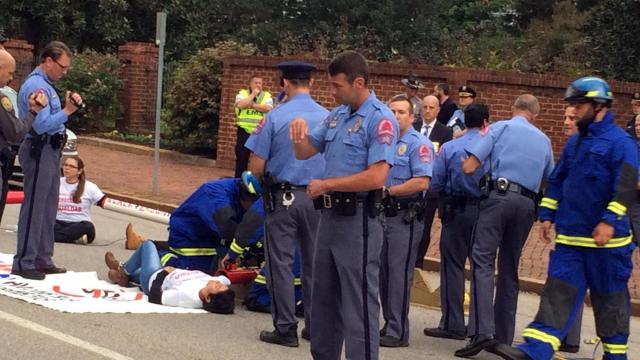 To some, a 'slight change in direction'

Carter Wrenn, a Raleigh-based Republican strategist, said he sees questions over sanctuary cities and Syrian refugees as national security issues, rather than social ones. But he acknowledged that McCrory's demands that Cooper support the Virginia school system on the transgender student lawsuit is a "slight change in direction" for a governor largely focused on the economy.

Although the two elected leaders have clashed publicly before, Wrenn said the communication from the opposing campaigns has grown more pointed.

"The surprise in the transgender bathroom issue is that it's sort of the first debate between the two of them," Wrenn said.

Compared with the Syrian refugee issue – on which both Cooper and McCrory largely agreed – Bitzer said the differences here were more stark, and drawing those distinctions for voters will become more crucial going forward.

"Any smart campaign strategy is: Always go on the offense, put your opponent on defense," Bitzer said. "I think the governor has had that opportunity on the past two recent issues."

In contrast to McCrory's action on sanctuary cities, which was in direct response to an 11th-hour bill from the General Assembly, McLennan said there was little need for the governor to urge state intervention in an appeals court case, where friend-of-the-court briefs don't make much difference to appellate judges. The governor himself, in an interview on the "Diane Rehm Show" on National Public Radio, said he didn't think there was much governors can do to turn refugees away from their states.

What his statements reflect, McLennan said, is a nationalization of state politics.

"These are all national issues," McLennan said. "What I'm seeing is McCrory following the national trend of Republicans who are standing up to what they see as the erosion of rights."

Pat McCrory Committee Director Billy Constangy has in previous statements tied recent issues such as sanctuary cities to public safety, and he said Wednesday that McCrory "has and always will stand up for North Carolina families against harmful policies and executive overreach from the federal government."

A campaign on the offensive

While executed under the duties of his office, the issues McCrory has tackled in the last few weeks and months have made appearances on the campaign side as well. He sought to boost his campaign war chest last week using the Syrian refugee issue, and on Tuesday, the governor's election committee released an up-tempo, dubstep-infused video rebuking criticism from the media and the left.

"They've been attacking us from day one, and they're working to stop the Carolina Comeback," McCrory says in the video, invoking a phrase he's often used to note economic gains the state has seen during his tenure. "They want to turn the clock back to the days of higher unemployment, higher taxes and bigger government. Ladies and gentleman, we're not going to go back to that North Carolina."

The video includes October footage of protestors who blocked downtown traffic in front of the governor's mansion in opposition to the sanctuary city ban.

Bitzer said it's certainly important to build momentum, especially with committed Republican voters, heading into what will be a busy campaign season. But he said McCrory does risk alienating moderates – in particular his former stomping ground of Charlotte and Mecklenburg County.

"I think any attempt to go back home and sell something that's maybe not appeasing to a liberal urban voter is going to be looked at very suspiciously," Bitzer said. "He was able to claim a significant amount of the Democratic crossover vote in 2012. I'm not convinced that crossover appeal is going to be there next year."

With the most recent polls pointed toward a close gubernatorial race, McLennan said it likely won't have a lot in common with the 2012 matchup between McCrory and Democrat Walter Dalton, who trailed his high-profile Republican opponent by more than 10 percentage points.

"It is going to sound different," McLennan said. "It's going to be a tough, hard-edged campaign."

Wrenn said he's not so sure that hard edge will include more emphasis on social issues. Although it's possible talk of transgender bathrooms may be a signal of something different, he expects the economy will still play front and center in 2016.

"All you can do is watch and see where they go next," Wrenn said.