As OPEC Meets, Sizing Up Its Power and Its Politics 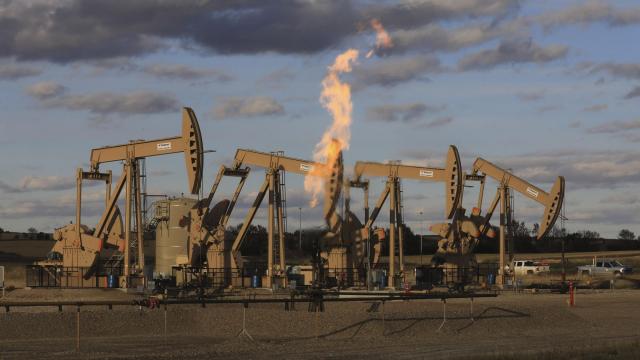 VIENNA — On Thursday, more than 200 oil industry representatives, financial analysts and journalists are expected to crowd into a basement auditorium at the headquarters of the Organization of the Petroleum Exporting Countries. It is a tricky time for OPEC at its twice-yearly gathering, and, more important, for the oil industry and consumers who depend on the world’s most abundant energy source.

Oil prices have been volatile in recent months. West Texas Intermediate crude rose to $76 a barrel in early October, the highest level since 2014, before plunging 35 percent to below $50 a barrel last Thursday, and then rising again Monday to about $53 a barrel.

Adding to the uncertainty, any steps OPEC takes to curb production or raise prices may anger President Donald Trump, who has tried to influence the oil markets in more obvious ways than any of his predecessors. Trump was ready with a tweet that landed midafternoon Wednesday in Vienna, putting the crowd on notice that he was watching.

“Hopefully OPEC will be keeping oil flows as is, not restricted,” Trump wrote on Twitter. “The World does not want to see, or need, higher oil prices!”

As OPEC prepares to meet, here is a checklist to help understand its power and its political sway.

Why does OPEC draw a crowd?

The 15-member organization produces about 40 percent of the world’s oil, and the group has a history of adjusting production to guide the market. OPEC is seen as a kind of oracle, especially when markets are jittery.

It is a gathering where an official like Saudi Arabia’s oil minister, Khalid al-Falih, who speaks for around 12 percent of world oil output, can hold an informal news conference in a hotel lobby. “At the end of the day they are the closest thing to a regulator or central bank of the oil markets,” said Helima Croft, an analyst at RBC Capital Markets, an investment bank.

How does OPEC work?

OPEC is a different organization than it was before a notorious meeting four years ago — Thanksgiving Day 2014 — when the Saudis declined to intervene in the markets and sent oil prices crashing. Since then, Saudi Arabia, OPEC’s de facto leader, has coordinated with Russia, once a rival, and both have benefited.

Other oil-producing countries are too small or hamstrung by political constraints to control the conversation. During the last two years, the Saudis, the world’s largest exporters, and Russia, which has been producing about 12 percent of world output, have called the shots.

A high-five between President Vladimir Putin of Russia and Saudi Crown Prince Mohammed bin Salman at the G-20 summit meeting in Argentina last week was a sign of how closely their interests are aligned.

“We call it OPEC, but it is a whole different system now. The managing committee is just two countries,” said Bhushan Bahree, an OPEC analyst at IHS Markit, a research firm.

Last summer, for instance, Saudi Arabia and Russia opened up the taps — in response to complaints about rising prices from the United States and other producers — leading to price declines and now-present worries about oversupply. The move brought complaints from other members, notably from Iran, that the Saudis run OPEC for their own benefit.

What is likely to happen?

Most analysts say that the oil producers have little choice but to announce a substantial cut in production of at least 1 million barrels a day, or around 1 percent of world oil supplies. Otherwise, prices could slide into the $40-a-barrel range or lower, squeezing the oil-dependent economies of member countries.

The purpose of cuts is to reduce supplies, to bolster prices and also to change market psychology.

“They need to cut because otherwise there will be a massive oversupply next year,” said Ann-Louise Hittle, an analyst at Wood Mackenzie, a market research firm.

What does Qatar’s announcement that it will leave OPEC mean?

Qatar, like Iran, appears to be fed up with Saudi Arabia’s dominance of OPEC. The minister of state for energy affairs, Saad Sherida al-Kaabi, explained the decision on Monday by saying that the oil business was “controlled by an organization managed by a country,” apparently referring to the Saudis. Qatar will leave next year.

Some analysts think that mutual interest in propping up prices may override discontent in the organization. “Most of the countries want someone to do some cutting,” said Bill Farren-Price, a director of RS Energy Group, a research firm. “They just don’t want to do it themselves.”

Can OPEC stop the price drops?

In the short term, yes. Al-Falih has been traveling the world, lobbying for cuts. On Saturday he scored a big victory when Putin said at the G-20 meeting that Moscow was ready to once again cooperate on market management. Predictably, oil prices jumped.

Over the longer term, though, what happens in the markets depends on several questions — likely to be answered in the next few months. First of all, how much oil will the Russians, whose companies are enjoying their country’s highest output ever, actually cut?

Another uncertainty is how much Iranian oil will the Trump administration’s sanctions take off the market. Sanctions went into effect in November but not as robustly as might have been expected. Washington’s granting of waivers to some of Tehran’s best customers, including China, Japan and India, led traders to suspect that the administration was not as committed to drying up Iranian crude sales as it earlier appeared.

The surging global demand that had been helping to prop up prices is also beginning to look wobbly. Wood Mackenzie, the energy consultancy, has forecast that demand will grow by about 1.1 million barrels a day this year and next year. That is a 20 percent deceleration from 2017, linked to a slowing world economy. Has Saudi Arabia lost credibility?

Analysts say there are doubts about how much room Saudi Arabia has to maneuver.

Al-Falih is believed to be guided by analyses of the oil markets and, perhaps more significantly, by the demands of Crown Prince Mohammed, who has been embroiled in a scandal over the murder of journalist Jamal Khashoggi inside the Saudi consulate in Turkey.

Traders also worry that Saudi oil policy will be influenced by Washington. The Trump administration has pushed Riyadh, through presidential tweets and other channels, to keep production high to tamp down prices for American consumers and to buffer the new sanctions against Iran.

“The Saudis are already finding that their ability to impact the markets through messaging and signals has diminished as a result of their challenging domestic politics,” Farren-Price said.

What role does the United States play?

The most potent force in the oil markets may be the third global oil leader, a surprise player that won’t be in the room on Thursday.

Oil production from the United States has been stronger than even some of the best-informed people in the industry expected. For instance, Saudi Arabia and Russia together increased production by just over a combined 1 million barrels a day from May to October. In that period the United States, benefiting from shale production, pumped up output by even more — 1.2 million barrels a day — according to statistics from the International Energy Agency.

By cutting output and raising prices, OPEC risks encouraging more investment by the shale oil producers in the United States and, in turn, losing market share.

“The United States is the prime agent of transformation” in the oil markets, analysts at IHS Markit wrote in October in a note to clients. “In turn, Russia and Saudi Arabia are the leaders of a global response team,” reacting largely to shock waves set off by the United States.

In other words, the United States is roiling the market — whether through booming domestic production or by curbing other countries’ exports through sanctions or by leaning on the Saudis to influence their oil decisions.