As Marbles celebrates five years, leader looks to the future 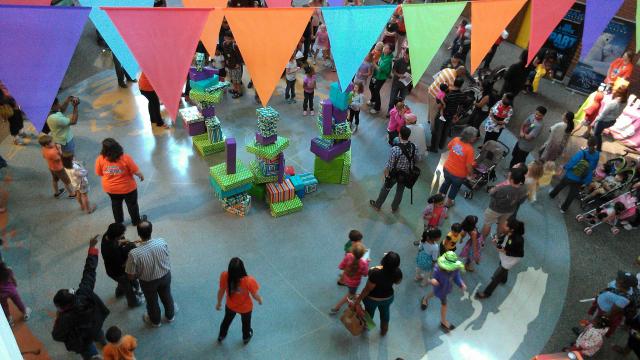 It's fair to say that Marbles Kids Museum in downtown Raleigh is playing a big role in the childhoods of both my kids.

There have been birthday parties and mom-and-daughter movie afternoons, countless rainy days "shopping" in the store in Around Town and hours spent gathering the plastic balls in Moneypalooza or playing hockey in Power 2 Play. My kids, ages 7 and 3, literally jump and down with excitement when I tell them that's where we're headed.

And my kids aren't the only ones who are growing up at Marbles. In the past five years, more than 2.5 million visitors have walked through the door, making it one of the most popular family destinations in North Carolina.

Marbles turns five years old on Saturday and is planning a full day of fun activities from 9 a.m. to 5 p.m. Museum admission (normally $5) is free. And tickets to all movies at its IMAX theater are just $5. The fun will spill out onto Hargett Street, which will be closed to the public for the festivities. Among the fun planned: A giant pile of presents that kids can knock down with a "wrecking ball," custom cake catapults, Happy Birthday sing-a-longs and much more.

I took the opportunity to check in with Marbles President Sally Edwards, who has led the children's museum from the very beginning. While it's been a big five years for the museum, leaders are not slowing down. As Edwards alludes to below, there will be some huge news for Marbles next week (can't wait to get and share all the details!) and more to come.

Go Ask Mom: Is Marbles where you thought it would be five years ago?

Edwards: Marbles has far exceeded our early expectations. Five years ago, we were so busy building exhibits to open the doors on time that we didn’t have time to really predict how the community would respond – we had to take giant leaps of faith. Fortunately, the response has been overwhelmingly positive; largely due to the fact that we’ve worked in tandem with the community from the beginning, with a true desire to make Marbles the entire community’s museum. We believe that’s been the formula for our success. Constant feedback, input and evaluation from members, teachers, visitors – and especially from kids – keeps us moving forward in the right direction.

GAM: What's the biggest surprise in the last five years?

Edwards: Wow – so many surprises, but I’d still have to say that the biggest was when 10,000 people showed up on opening day. We’ve never looked back!

GAM: Is there anything that hasn't worked?

Edwards: We’ve tried a few times to create quiet nooks in the museum for reading or storytelling, only to discover that what children and families love most about Marbles is the energy and excitement of engaging, active play.

GAM: Do you have a favorite part of the museum?

Edwards: Each exhibit is unique and I truly love them all. However, because we have so much fun and get so immersed when creating new exhibits, it seems like my favorite is always the most recent! So right now it’s Toddlers Hollow, our new developmental play area for children under three. The beautiful woodland mural has come to life with rich and creative play experiences. From the day Toddlers Hollow opened in July, we’ve witnessed the wonder of discovery and seen the magic of children reaching developmental milestones.

(Editor's Note: The new Toddlers Hollow is, indeed, a really great addition to the museum. I featured it the other week).

GAM: What does the future hold for Marbles?

Edwards: Next week, we are announcing a major new exhibit that will add some much-needed capacity and bring a bit of excitement to our exterior too. We’ve become known for regularly introducing fresh, innovative programs and new exhibits; and we don’t plan on slowing down! If anything, we’re picking up the pace of change in the next 18 months. Lots of exciting projects with great community partners are in the works. Looking ahead a little further, we’re working hand-in-hand with our lead partner and landlord, Wake County, to create a master plan for future expansion to better serve the ever-growing number of children and families coming to Marbles to play.

I'll have much more about the big news next week. Happy Birthday Marbles!