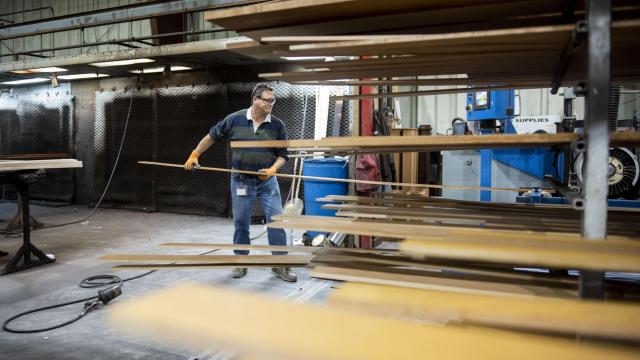 MILWAUKEE — At Western Building Products’ banana-shaped factory on the lip of the Menomonee River outside Milwaukee, the company’s president, Mark Willey, is wrangling with a stubborn problem: not enough workers.

“If someone is here a year, they never leave,” Willey said. “Our problem today is just finding people who want to work.”

It is a headache employers across the country are confronting, as Friday’s monthly jobs report from the government illustrated. The unemployment rate in November held steady at 3.7 percent — the lowest in nearly half a century. And while the pace of hiring slowed to 155,000 from October’s above-average showing, the parade of payroll gains marched on uninterrupted for the 98th month.

After a week in which the markets gyrated and presidential tweets caused trade tensions to flare, the labor market’s steadiness offered a dose of calm.

“It’s obviously an economy that is well in expansion mode but that is coming off the boil after a strong second and third quarter,” said David Donabedian, chief investment officer of CIBC Private Wealth Management. “So the state of the job market is good. It’s just that the pace of job creation is slowing a little bit.”

Average hourly earnings rose 0.2 percent in November, keeping the year-over-year average at 3.1 percent for the second month in a row, a level not seen since the recession. “If you have solid wage growth while productivity is improving, that is the best of both worlds,” Donabedian said.

The labor shortage has been a boon to workers who were hit hardest during the recession: Minimum-wage earners, African-Americans, Latinos and Americans with a high school diploma or less have all seen their jobless rates decline in recent months.

Many of them were able to find jobs in health care, manufacturing, and transportation and warehousing, which were among the strongest job-creating sectors.

Employers added 27,000 manufacturing jobs in November, on top of nearly 300,000 positions in the previous 12 months.

Those who are doing the hiring, though, have repeatedly complained that the field of available workers has been picked through, and that people with sufficient skills are particularly scarce.

At Western in the Milwaukee area — where the jobless rate is down to 3 percent — workers bundled against the cold unloaded door frames on Friday. Elsewhere, millwork employees used palm sanders to smooth down doors suspended back to front from a conveyor, like a scaled-down, less colorful version of Disney’s animated “Monsters, Inc.” factory.

This December has been unusually busy, said Willey, who is finishing up his 42nd year at the factory, where he started as a seasonal worker. The company has 217 people on staff and expects to raise the total to 230 next year.

Entry-level wages are $12.50 an hour, while the typical worker earns nearly $17 an hour plus benefits. Because the business is 100 percent employee owned, workers build up equity in the company after a year, which Willey said amounted to a 25 percent raise. He and his colleagues have batted around the idea of raising starting wages to $16 an hour, but “we have to have the productivity for it to make sense,” he said.

Western has used temporary agencies and employs inmates from a nearby correctional facility as part of a work-release program. “When they get released, we hire them,” Willey said. “Some we even hire while they’re still in.”

The company is also working with local high schools that teach students the building trades. “We’ve had a few coming by, hoping they’ll want to work here when they graduate,” Willey said.

As for workers, in national surveys they have complained for years about sluggish wage growth and nipped opportunities for advancement.

A growing number of workers say they are willing to take the risk of hopping to another job in search of higher pay and more responsibility, according to Gartner, a research and consulting firm that conducts a quarterly national survey of 20,000 employees at companies valued at $100 million or more.

“One of the things we’ve seen is that it’s harder for employees to get promoted nowadays,” said Brian Kropp, vice president for human resources at Gartner. In 2006, for example, it took an average of about 2 1/2 years to get a promotion, compared with 4 1/2 years now. The result has been growing dissatisfaction and resentment. The share of employees who say they are willing to go above and beyond at work has dropped, Kropp said. One in 4 employees used to report giving work an extra oomph — something Gartner calls “discretionary effort.” Now, it’s closer to 1 in 6.

The reason, Kropp said, is simple: Workers are not being rewarded for their efforts.

At Western, business has been good enough that the 82-year-old company is scouting for a location to build a bigger factory. Willey, though, is worried that the economy will cool over the next couple of years.

A shortage of workers in the building trades has caused projects to back up. At the same time, interest rates have climbed and tariffs put in place by President Donald Trump have bumped up the cost of materials. Willey pointed to the aluminum sills that run along the bottom of doors, and the steel hinges bolted onto the sides.

As a result, some buyers may simply choose not to go forward.

“Everybody’s keeping their fingers crossed,” Willey said, referring to hopes of a trade agreement between the Trump administration and China. The president has threatened to raise tariffs on $200 billion of Chinese goods to 25 percent, from 10 percent, if no deal is reached.

Uncertainty about trade policy is fueling anxiety in all corners of the economy.

“That is the biggest impediment now,” Chris Rupkey, chief financial economist at MUFG, said. “The ball is in the president’s court to make sure the China deal is still on.”

Manufacturing and related sectors tend to be more susceptible to economic cycles and are particularly vulnerable to tariffs.

The Commerce Department has reported that construction of single-family homes fell for the second month in a row in October. Slackening auto sales were part of the reason General Motors announced last week that it would idle five plants and cut about 14,000 jobs in North America. Ford has also announced plans to trim its workforce.

Friday’s jobs report, which provided a welcome counterpoint to slowdowns, layoff announcements and stock market swings, is unlikely to deter policymakers at the Federal Reserve from raising benchmark interest rates when they meet on Dec. 18 and 19.

Next year is a different story. Most analysts expect that the slowing pace of job creation will encourage the central bank to take a more cautious approach in the future. The jobs report, of course, is a temporary and incomplete snapshot of the labor market. Last month’s figures will be revised twice. Revisions announced in this report trimmed 12,000 job gains from the September and October data.

Whether a tightening market can bring in sidelined workers is still a subject of keen debate. The share of adults in the workforce remains stuck at unusually low levels — under 63 percent in November. A broader measure of unemployment that includes workers too discouraged to search for a job, and part-timers who would prefer full-time work, ticked up to 7.6 percent in November, from 7.4 percent the previous month. Long-term unemployment is also double what it was in the early 2000s.

“Even now, at this point in the recovery,” Martha Gimbel, research director at the job-search site Indeed, said, “one of the fastest growing jobs search terms on Indeed is people looking for ‘full-time work.'”