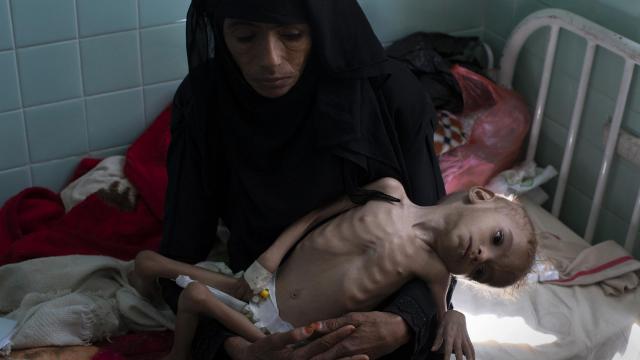 HODEIDA, Yemen — Growing international concern over the dire humanitarian situation in Yemen, where the United Nations warns that a mass famine is looming, led to a concerted diplomatic push last week by the United States to finally get both sides around the peace table. But the pace of fighting has only escalated.

The Saudi-led coalition, which the United States has armed and supported, has launched a punishing wave of airstrikes against the rebel Houthis. The warplanes have hit targets in the capital, Sanaa; in the mountainous northern provinces; and in the Red Sea port of Hodeida where, aid workers warn, the country’s main humanitarian lifeline hangs by a thread.

A senior aid worker and two Western officials, who asked not to be identified so they could speak openly about Hodeida, said in interviews that the coalition, commanded locally by the United Arab Emirates, had redoubled its five-month offensive to snatch the city from Houthi control.

Columns of Yemeni militias fighting under the coalition flag have burst across a major front line and swept through the desert on the eastern edge of the city, threatening to encircle it completely, they say. Warplanes and attack helicopters have pummeled Houthi positions in the city in what aid workers called a near-continuous barrage of air attacks.

Inside the city, local people reported that Houthi fighters had entrenched themselves, taking up positions in apartment buildings, hospitals and homes. At least 150 fighters from both sides have been reported dead so far.

Tens of thousands of civilians, including some who only recently returned to the city during a lull in fighting, are sheltering in their homes, anxiously waiting. As the front lines have shifted, some have been forced to flee. A handful have been killed by stray gunfire.

Even with the clashes, the port of Hodeida, which lies just north of the city, is still working. On Tuesday, seven ships were at berth with an additional eight waiting to dock, including one vessel containing 10,000 tons of relief grain, the Western officials said.

Strikingly, they added, the relief shipment was financed by the United Arab Emirates — the same power that was sending warplanes screaming over the city as its officers commanded the assault on Hodeida from the south.

The surge in fighting started days after U.S. Defense Secretary Jim Mattis called for the Saudi-led coalition and the Houthis to start peace talks within 30 days. His statement came amid growing questions over whether the U.S. military was doing enough to reduce civilian deaths.

Yemen’s crisis, already grave for several years, has recently deteriorated so rapidly that the United Nations has warned that 14 million people, or half the population, could soon be on the brink of starvation. This week, the chief humanitarian coordinator, Mark Lowcock, called that prospect the “apocalyptic scenario.”

The surge in fighting may stem from a Saudi desire to score territorial gains before any talks. But analysts say it could just as easily plunge the country deeper into war.

“Any military escalation does not help efforts to relaunch the political process,” Martin Griffiths, the U.N. peace envoy, said in a text message. “No one wants to see a catastrophe in Hodeida.”

During a previous offensive a year ago, the Houthis retaliated by firing missiles that came close to the Saudi capital, Riyadh, prompting the Saudis to impose an air and sea blockade Houthi-controlled ports that lasted for seven weeks. This time, at the urging of U.N. officials, the Houthis have not fired any missiles over the border. But as fighting escalates, officials warn it is unclear how long that restraint will last

About 75 percent of all international relief passes through Hodeida, and the city’s population has swelled in recent weeks as refugees who fled in June filtered home. Radhwan Shuhaibi, a father of four, said he could no longer stand the cramped, desperate conditions his family had endured in Sanaa.

In the city center, Houthi fighters riding motorbikes circulate through the largely empty streets, carrying sniper rifles and rocket launchers. Some ousted residents from their homes, which they used for sniper positions. The Houthis have been preparing for a battle inside the city for months, digging trenches in streets and laying land mines.

Residents say there is a steady drumbeat of explosions from artillery or strikes by coalition warplanes and Apache attack helicopters. Early Monday, mortar shells hit a printing plant on the city outskirts, killing at least one worker and wounding three, according to plant officials.

Aid workers say that 90 percent of patients have fled the city’s main hospital, which now lies with half a mile of the front line. UNICEF reported that 59 children, including 25 in the hospital’s intensive care unit, were at imminent risk of death.

Over the weekend, the United Nations intervened to stop the Saudi-led coalition from bombing the hospital, where Houthi fighters had taken up positions on the roof.

That is a frequent problem in Hodeida, where Houthi fighters often fight near humanitarian buildings that are protected by a “no-strike” list drawn up by the coalition, the United States and the United Nations. Houthi fighters cache weapons or station troops beside such buildings in the hope of protecting them from airstrikes — but in so doing, can turn the buildings into legitimate military targets.

The Saudi-led coalition has assured the United Nations that it does not intend to bring the fight into Hodeida or to capture the city port. But the Saudi-led forces are now a few miles from the city’s northern gates. Should they capture that area, they could encircle the city and impose a siege that would trap tens of thousands of civilians alongside the Houthis.

The United Nations has positioned a ship offshore to evacuate its staff should fighting spread to the streets. For civilians, a siege would even further limit access to food or clean water, and could lead to a deadly cholera epidemic. As the fighting nears, many are making difficult calculations.

Bandar Khaled, a shipping official who has been out of work for months, said he feared that his family would soon be unable to leave. “Getting trapped in here would be the worst,” he said. Part of the problem, said a senior Western official familiar with the peace efforts, is the political turmoil caused by the death of Saudi dissident Jamal Khashoggi. With Crown Prince Mohammed bin Salman, a critical U.S. ally, under intense scrutiny over his presumed role in Khashoggi’s death, the direction of Saudi policy in Yemen is increasingly unclear.

Some U.S. officials, led by Mattis, are seeking to help Crown Prince Mohammed extract himself from the Yemen war, a grinding and thus far unsuccessful campaign that some officials fear is becoming a military and diplomatic quagmire akin to Saudi Arabia’s Vietnam.

The Western official said that Gen. Joseph Votel, the head of U.S. Central Command, had drafted a proposal that would see the Saudis reduce airstrikes over Yemen in return for a Houthi commitment not to fire rockets into Saudi Arabia.

In parallel, Griffiths, the U.N. envoy, is hoping to achieve some political momentum before he addresses the Security Council on Yemen on Nov. 16.

But there remains a deep gulf of trust. An attempt to bring the Houthis to peace talks in Geneva in September collapsed after Houthi officials failed to turn up. Houthi officials complained then that they did not trust the Saudis, who control the airspace over Yemen, to ensure their safe passage to and from the country.

U.N. officials say they are currently working to overcome those concerns and get both sides to the talks.