Protesters take to the streets for a second night in Raleigh, no arrests made

Raleigh, N.C. — Protesters took to the streets for a second night in a row in downtown Raleigh, standing against police brutality toward the Black community.

For Friday and Saturday nights, the Mayor of Raleigh Mary-Ann Baldwin put in place a curfew for 10 p.m. Only about 20 people stayed out past the curfew on Saturday night.

"It sends a message that we are not playing tonight," Baker said. "We are serious tonight after what happened (Friday night)."

The Wake County Justice Center was vandalized with red paint, graffiti and windows were smashed. A memorial for fallen deputies, outside of the justice center, was also vandalized with paint.

One message on the walls of the justice center was "Burn the prisons." 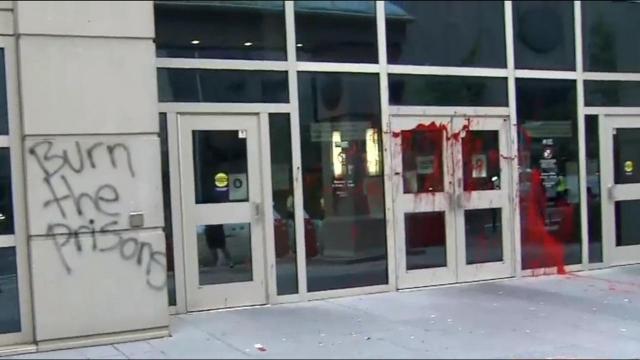 "I thought our police response was appropriate," Baldwin said. "I was relieved to see there was minimal damage."

WRAL did not learn of any businesses that were damaged in Raleigh during Friday and Saturday night's protests.

"I think most people knew what the rules were and abided by the rules," Baldwin said.

"Some of the things happening today are disturbing so I just kind of wanted to put my efforts in, if nothing more to participate," said one demonstrator Delious Thompson.

He also said he wanted to introduce his kids to activism and wanted them to have the experience of a protest.